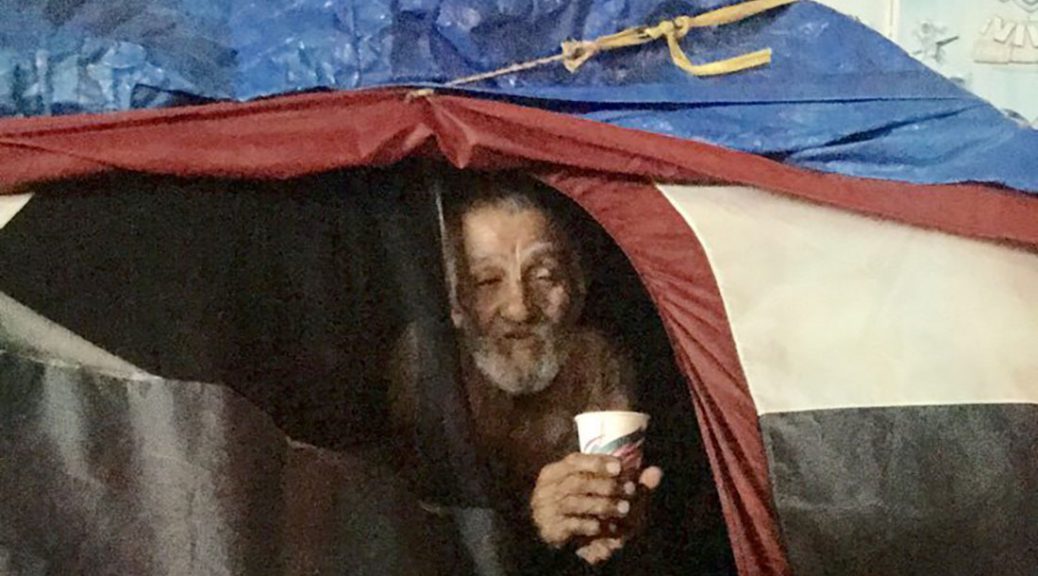 It’s near 4 a.m. when the green minivan carrying two volunteers turns the corner and spots a woman hailing them down. Emmanuel, the driver and volunteer leader of tonight’s outreach program, parks on a street corner, and two women come rushing out from the shadows of a storefront porch.

Natalia, dressed in a short jean skirt and black tank top revealing a chronic skin rash, asks in a raspy voice for coffee, juice and an extra sandwich to take back to her friend. The other woman, clad in a mismatched terrycloth jumpsuit and missing most of her teeth, brings over a handful of used needles to exchange for clean ones.

Iniciativa Comunitaria, a San Juan-based public health non-profit, runs overnight outreaches to bring food and drink to the city’s homeless population, many of whom are chronic users of drugs including heroin or methamphetamine.

“We humanize them and care for them without judgment,” said Ivan Figueroa, a pharmacist by day and volunteer who’s been working with the organization for over five years.

That’s why they also bring sterile needles, antiseptic wipes and other drug paraphernalia.

Puerto Rico, an island about the size of Connecticut with around 3.3 million residents (a number rapidly decreasing due to lack of economic opportunity and straggling recovery after Hurricane Maria), staggers under the quantifiable impact of chronic drug use. An estimated 60,000 people use intravenous drugs. The island has the highest rate of HIV in the western hemisphere, with approximately 42 percent of cases caused by injection with shared or reused needles. Nearly 70 percent of hospital admissions are related to heroin overdose.

But the needs for hurricane recovery remain evident on the island. Plenty of houses, especially those in rural areas, still have tarps for roofs, cities still experience blackouts and, according to one professor at the University of Puerto Rico Mayaguez, days without running water have become the new normal.

Such conditions coupled with the $72 billion debt crisis make alleviating the scourge of drug addiction a low priority. It’s also sent more people to the street, where individuals are far more likely to start using heroin or something similar. Regardless, the needs of drug addicts aren’t considered a priority, experts say, and most organizations direct funds towards more visible causes.

“People aren’t in this tough place because they’re lazy, bad or stupid,” says Rafael Torruella, executive director of the syringe exchange nonprofit Intercambios. “But we don’t talk about the human rights of marginalized populations. We just make them more vulnerable.”

What institutions do exist on the island—usually faith-based treatment centers such as Hogar CREA, under fire as reported by NPR for alleged practices of profiteering from clients including those mandated through drug courts. The CREA program, the biggest in Puerto Rico, continues to employ the largely disavowed practice of confrontational therapy, which humiliates participants and builds them back up in a certain image, according to reporting from Latino Rebels.

Intercambios, located on the western coast in Fajardo, along with Iniciativa Comunitaria and a host of other non-profits in Puerto Rico have stepped up to fill the void left behind by dwindling public services. They practice “harm reduction,” which attempts to mitigate the adverse health and social affects of drug use.

“We evaluate the social consequences of drug use on a population versus the harm of the drug itself on a individual,” Torruella explains.

Harm reduction practices emphasize the bio-psychological and cultural factors of drug addiction. The programs focus on restricting the spread of disease or infection and improving quality of life for chronic drug users, sex workers and the homeless.

The goal, unlike more traditional treatment models, is not sobriety. It’s to help people live longer.

These methods include drug and sex education, exchange of needles and drug paraphernalia and, although not yet legal in Puerto Rico for civilian use, the use of naloxone (known on the street as narcan), the opioid overdose reversal drug.

Drug addicts—who Rafi says should be called “chronic drug users”—are rarely seen as sufferers of a chronic illness. Many harm reduction advocates argue society has imposed stigmas around users that relegate them to the fringes of society and judge their sickness as a character flaw. That social judgment has translated into laws that criminalize drug use, Rafi bullishly argues. The stigma only sends them deeper into the underbelly of our cities and heightens other health risks, according to Rafi.

“This is not a war on drugs, this is a war on drug users,” he says. “There’s no opioid crisis, there’s a drug policy crisis.”

Fear of reprimand—social or legal—keeps many who live on the streets hidden during the day. That’s why some organizations conduct trips at night, like the one organized by Iniciativa Comunitaria. Vulnerable people often feel safest in the dark, Emmanuel says.

What was an already a pressing problem only worsened after Hurricane Maria. In the wake of death and destruction, reports of mental health conditions spiked island-wide while the ready availability of pure heroin declined rapidly, volunteers say. People doubled down on fentanyl—which had already started creeping its way onto the island—a stronger, cheaper, synthetic opioid that, while legal with a prescription, is often mixed with heroin on the black market.

Sometimes, users took it unknowingly, thinking they were purchasing heroin but, in reality, they had purchased a blend of the two. Other times, they were re-using equipment tainted with the substance since needles become scarce following Hurricane Maria when the island wasn’t navigable, according to Latino USA.

Experts say the pervasiveness of fentanyl is what’s responsible for the opioid epidemic in states like West Virginia, New Hampshire and Ohio, and they worry it could soon become a crisis in Puerto Rico, too.

PBS reported Puerto Rico’s Administration of Services for Mental Health and Addiction confirmed 40 fentanyl-related deaths since the start of 2019, with another 75 suspected cases going uninvestigated due to insufficient resources.

However, even these numbers are likely inaccurate, according to Intercambios’ Carla Correa Cepeda, because the government doesn’t adequately track morbidity and mortality, leaving the work to small non-profits already stretched thin. Whatever information the government does have, it rarely releases in full.

Anecdotally, the number of drug users and homeless continues to climb, Emmanuel says during the drive.

Near a highway underpass, the van approaches a group of 10 people, a mix of men and women, some more alert and coherent than others. After handing out the requisite assortment of needles, antiseptic wipes and the coffee mixed with copious amounts of cream and sugar, a woman named Carolina speaks animatedly getting off the streets.

But Carolina is unlikely to achieve such dreams as long as her addiction is criminalized and effective treatment withheld.

Legislation has long lagged behind scientific research that supports harm reduction practices. For example, a team of researchers from University of Nebraska found syringe exchange programs in Puerto Rico reduce the spread of disease and decrease the likelihood that drug users will share or reuse needles. As for naloxone, a study revealed that while administration of the drug in a hospital has lowered the number of deaths from opioid overdose, questions remain surrounding its efficacy in a civilian setting and proper dosage. The FDA hasn’t updated its recommendations since the study came out over one year ago.

The scale of the epidemic on the mainland—more than 47,000 people died of opioid overdose in 2017—compelled President Donald Trump to declare it a public health emergency. Reporting from Pacific Standard divulged state lawmakers and clinicians had yet to see the real impact of the declaration, however.

Last October, the U.S. Congress passed an overwhelmingly bipartisan bill funding federal and state treatment centers, enhancing drug enforcement at the border and supporting private partnerships like Emergent BioSolutions plan to provide free nasal spray at public libraries and YMCA facilities nationwide. Puerto Rico is excluded from the legislation (and therefore any funding that comes from it) since it’s not a state.

On its own, the island—which serves as the first point of entry for many drugs into the United States—can request money from the federal government, which it’s been slow to do, and craft its own legislation, which a group of legislators did over two years ago, even before Hurricane Maria.

The bill, which would permit nonprofits to distribute naloxone to civilians and implement a comprehensive island-wide overdose prevention program has languished in Puerto Rico’s Congress. It’s passed the House and Senate, but sits stalled in committee before it will go to the desk of Governor Ricardo Roselló, who has said the “threat of overdose does not constitute an emergency in Puerto Rico.”

In the mountainous town of Fajardo, Intercambios seeks to educate the public about how harm reduction practices like needle exchange can lower rates of HIV.
Photo at top: Volunteers with Iniciativa Comunitaria serve homeless people such as this man who lives in a highway underpass. (Carly Graf/Medill)