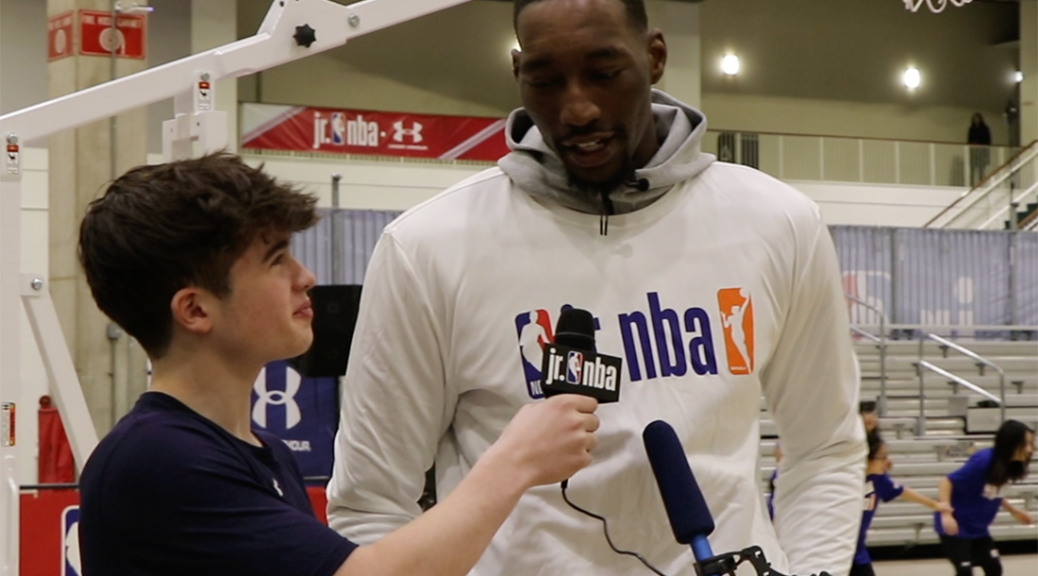 When he’s not working as a studio analyst for the Bulls at NBC Sports Chicago, the three-time NBA champion heads down to his home in Louisville. During Adebayo’s lone collegiate season with the Kentucky Wildcats, Perdue got the opportunity to watch the Newark native first-hand many times.

“He was pretty raw coming out of Kentucky,” Perdue said.

END_OF_DOCUMENT_TOKEN_TO_BE_REPLACED 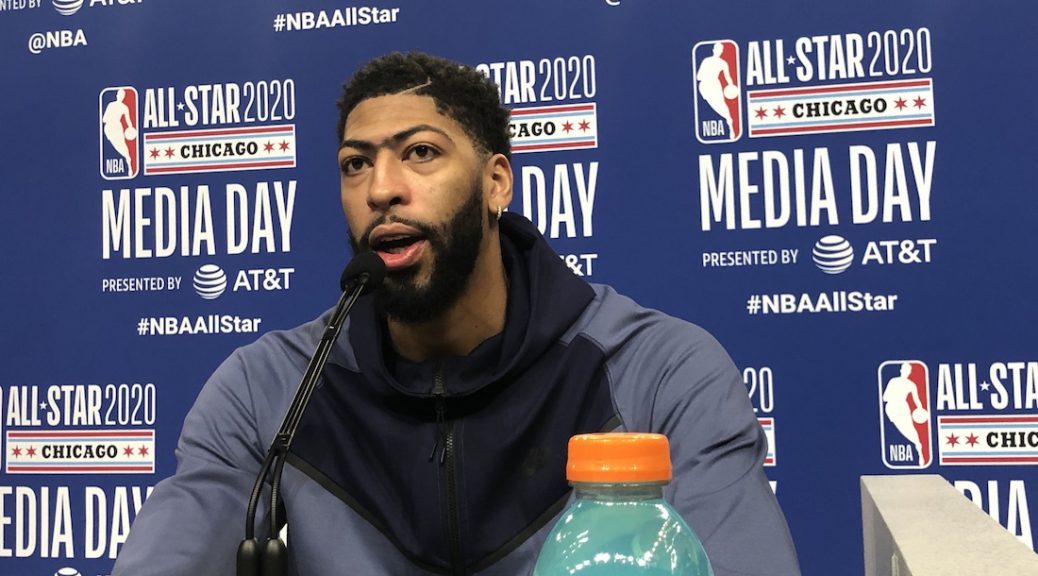 The church, a Gothic age creation that was rebuilt after the fire of 1900, boasts nine Tiffany windows and was named a Chicago Landmark in Sept. 1977 and a National Historic Landmark in March 2013.

During that time 10 years ago, Davis was an unknown product, playing for an unknown school, staring into an unknown future. Just another teenager, ascending three-dozen winding steps to reach the dusty court that was closer to 64 feet in length than the regulation 94 feet.

END_OF_DOCUMENT_TOKEN_TO_BE_REPLACED 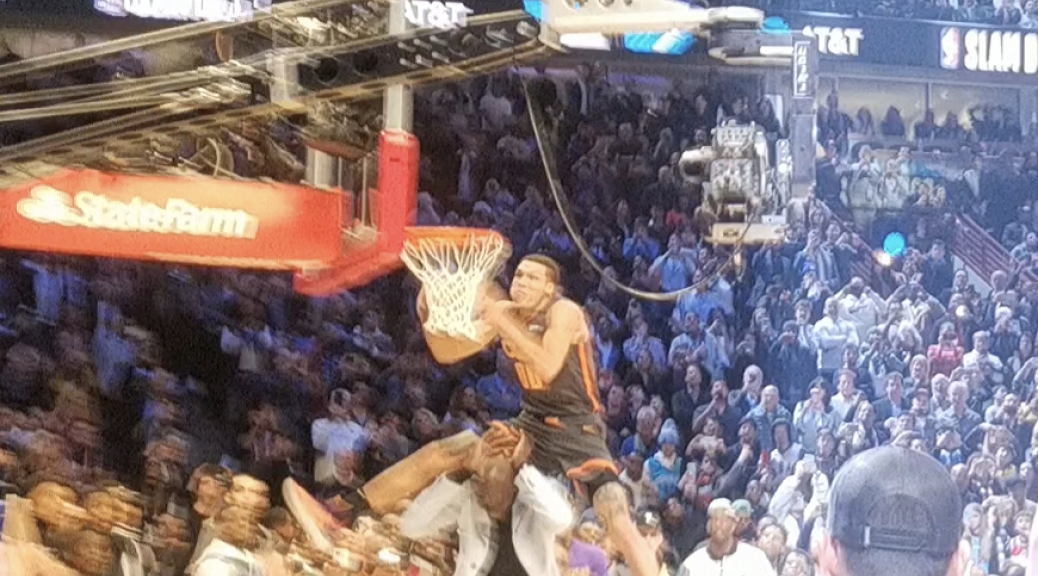 Aaron Gordon made history, but it was Derrick Jones Jr. who came home with the hardware on his 23rd birthday in one of the most electrifying NBA Slam Dunk Contests of all time.

Gordon, who entered the contest with three perfect scores in his two previous dunk contest appearances, reeled off five consecutive perfect scores to begin the contest, which has never been done. In the process, Gordon passed Zach LaVine (7) and Michael Jordan (6) for the most perfect scores in the history of the Slam Dunk Contest. Despite Gordon’s historic performance, Jones was able to keep pace with Gordon, and ultimately prevail in a controversial decision by the judging panel

“I’m happy that I was able to be a part of this and showcase my talents,” Jones said. “Just show the world that I am the best dunker in the NBA.”

END_OF_DOCUMENT_TOKEN_TO_BE_REPLACED 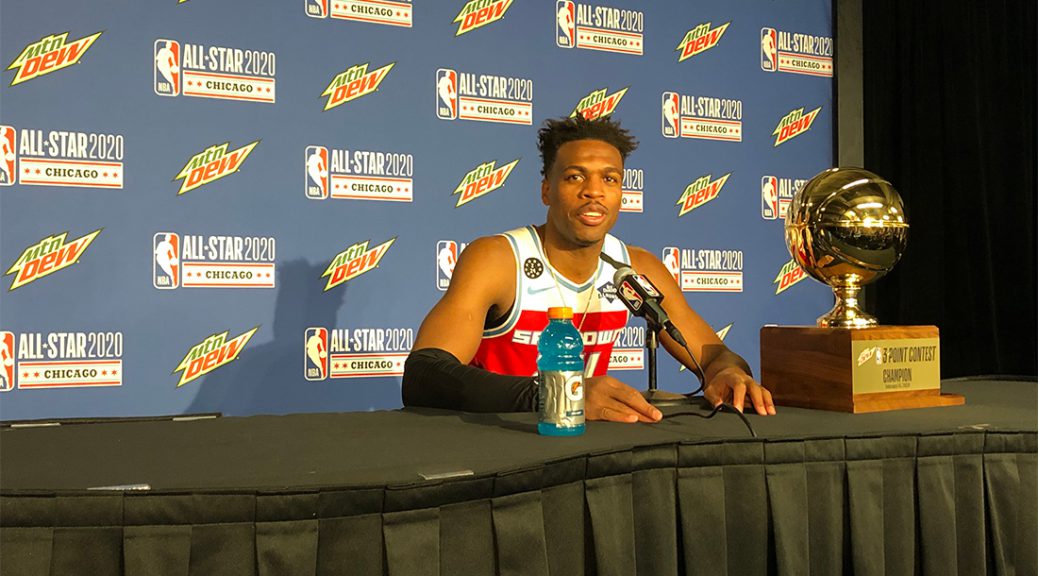 “I felt great,” Hield said. “Like I said earlier, as a shooter, this is on your bucket list. You have to come in, and you want to win a three-point shootout. With a stacked field like that, it makes it even better.”

Last year, Hield posted a disappointing score of 19 in the final round, losing to eventual champion Joe Harris, who took home the trophy with a score of 26.

On Saturday Hield was the final shooter of the night, with another 26-point score — from Booker — standing in the way of victory. Hield had 19 points as he reached his final rack, the money ball rack. He made his first three shots, missed his fourth, then sank the last one to win the trophy.

END_OF_DOCUMENT_TOKEN_TO_BE_REPLACED 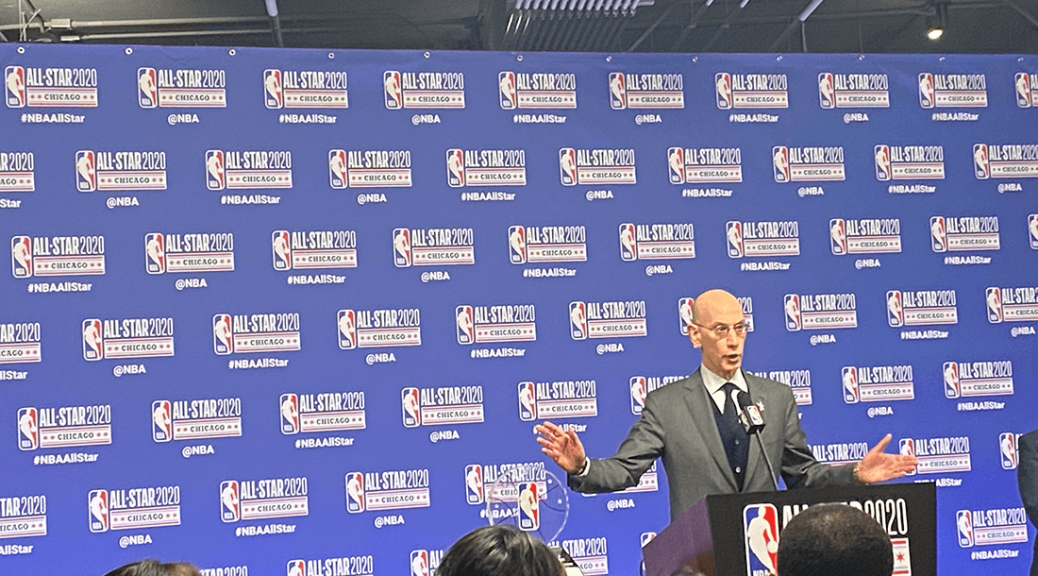 NBA Commissioner Adam Silver announced Saturday that the All-Star Game’s Most Valuable Player trophy would named in honor of the late Kobe Bryant.

The 18-time All-Star and his 13-year-old daughter, Gianna, died in a helicopter crash outside of Los Angeles on Jan. 26.  They were among nine deaths in the tragedy.

“I know it will be especially meaningful to that player that wins the first Kobe Bryant MVP,” Silver said.

END_OF_DOCUMENT_TOKEN_TO_BE_REPLACED 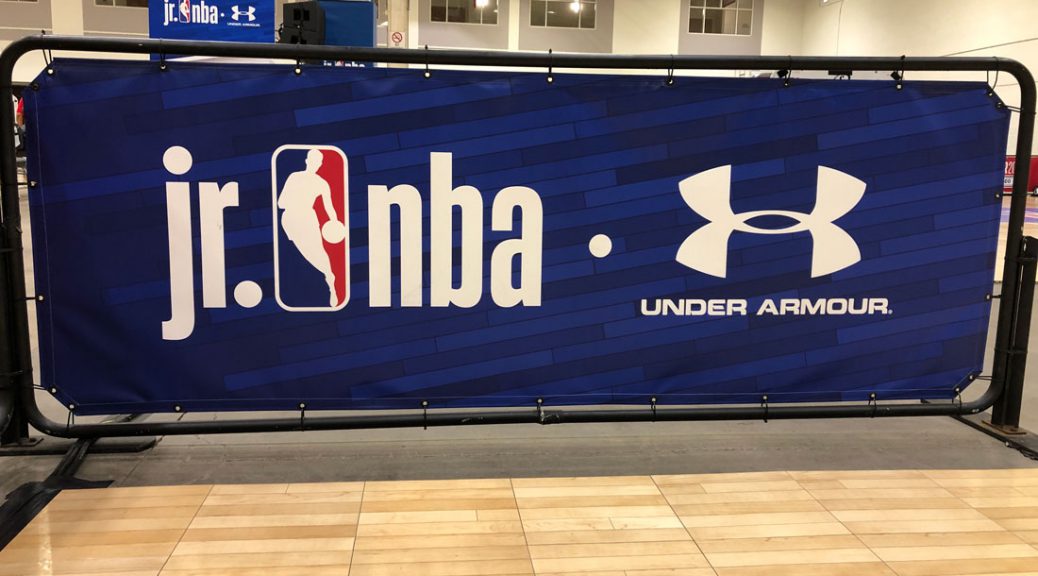 The Jr. NBA kicked off all-star weekend with its skills and development camp at Navy Pier on Friday. Over 1000 students participated getting instruction from a host of NBA players.

Photo at top: Signs for the Jr. NBA kickoff event, sponsored by Under Armour, are posted throughout the camp. (Evan Brooks/MEDILL) 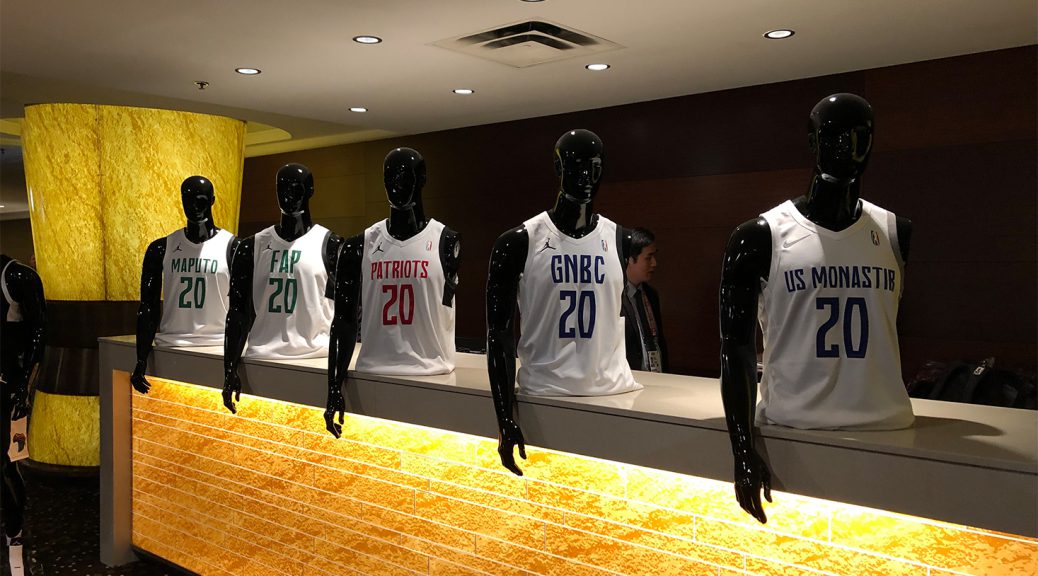 Basketball is a sport that is growing and the best example of its growth was the announcement of the 12 teams participating in the new Basketball Africa League, 10 years after the NBA opened an office in Africa.

Former and current African NBA and WNBA players were at the luncheon to welcome the 12 new teams who will start their first season in March. The  teams are from Algeria, Angola, Cameroon, Egypt, Madagascar, Mali, Morocco, Mozambique, Nigeria, Rwanda, Senegal and Tunisia.

END_OF_DOCUMENT_TOKEN_TO_BE_REPLACED 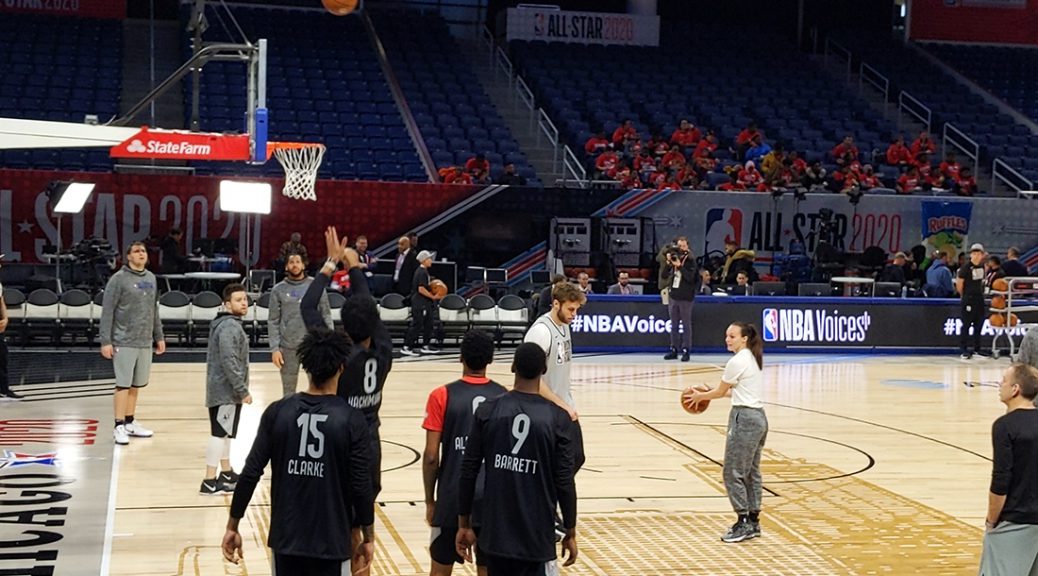 Some college reunions take place at a pub or a restaurant. Some, like that of former Duke teammates RJ Barrett and Zion Williamson on Friday night, take place floating over 10 feet in the air on national television.

In the third quarter of the 2020 NBA Rising Stars Challenge, which Team USA won 151-131, Barrett streaked down the court to greet his friend by doing the impossible: Stop the tsunami that is a Williamson fast break.

Barrett and Williamson rose up together, like a wide receiver and a cornerback leaping for a jump ball, and it was Barrett that won the duel. The United Center crowd groaned and booed as they realized what had happened: Barrett had robbed them of what they came for, a gravity-defying, rim bending, Williamson alley-oop.

END_OF_DOCUMENT_TOKEN_TO_BE_REPLACED 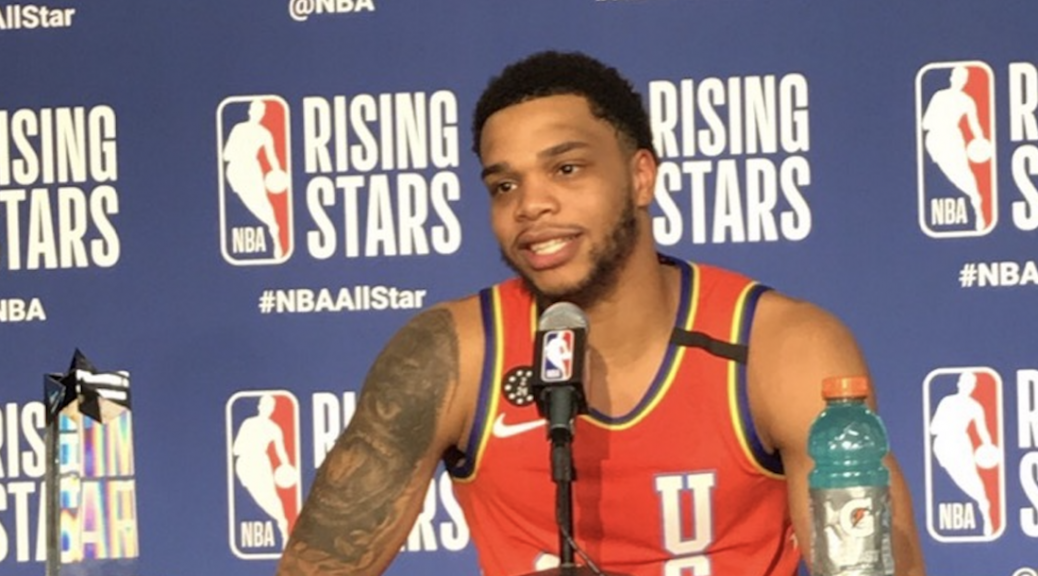 The United Center is a long way from 411 East 3rd street, Flint, Michigan, a YMCA with an odor of toughness as strong as the determination of the city in which it resides.

Two hundred, seventy four and two-tenths miles away to be specific.

But on Friday night, when the lights were brightest and all the future stars of the NBA were on full display, it was a young man who starred in that gym that hoisted the MVP trophy of the Rising Stars Challenge.

“It feels like yesterday,” Miles Bridges said. “I stayed at the YMCA in Flint all day and night just trying to get to this level. For me to get here, I give all glory to God. I’m just happy to be here.”

END_OF_DOCUMENT_TOKEN_TO_BE_REPLACED 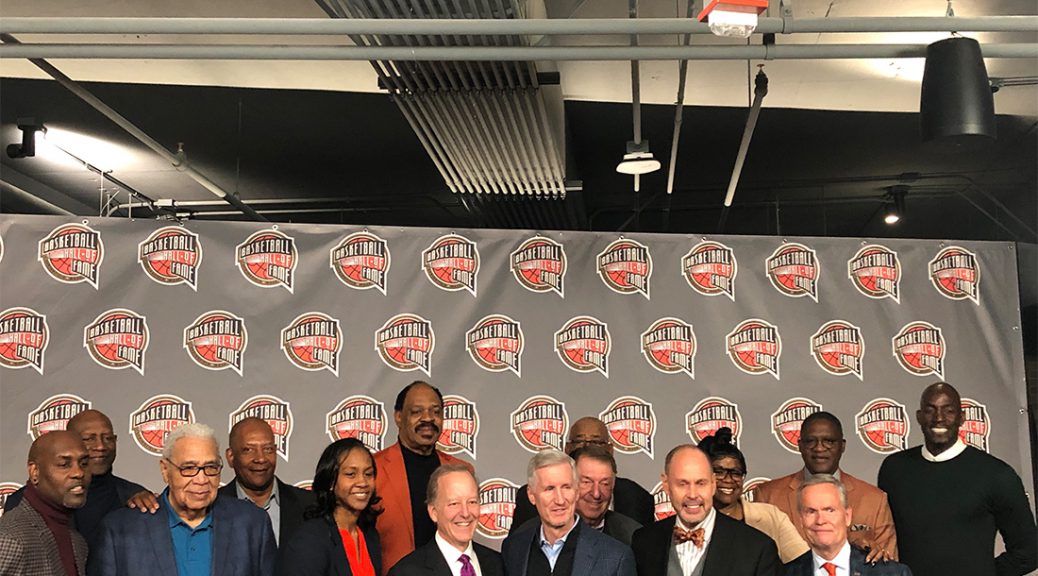 The Basketball Hall of Fame finalists were announced Friday, but the typically joyous occasion was somber when recalling the memory of Class of 2020 nominee Kobe Bryant.

“We wish he were here today,” said NBA TV host Matt Winer, who emceed the announcement.

Bryant was one of nine people that died in a helicopter crash in late January, including his daughter. It is his first year to be nominated for the Hall of Fame and “the entire basketball community is still grieving” the passings of Bryant, Hall of Fame Coach Morgan Wooten and former NBA Commissioner David Stern, Winer said.