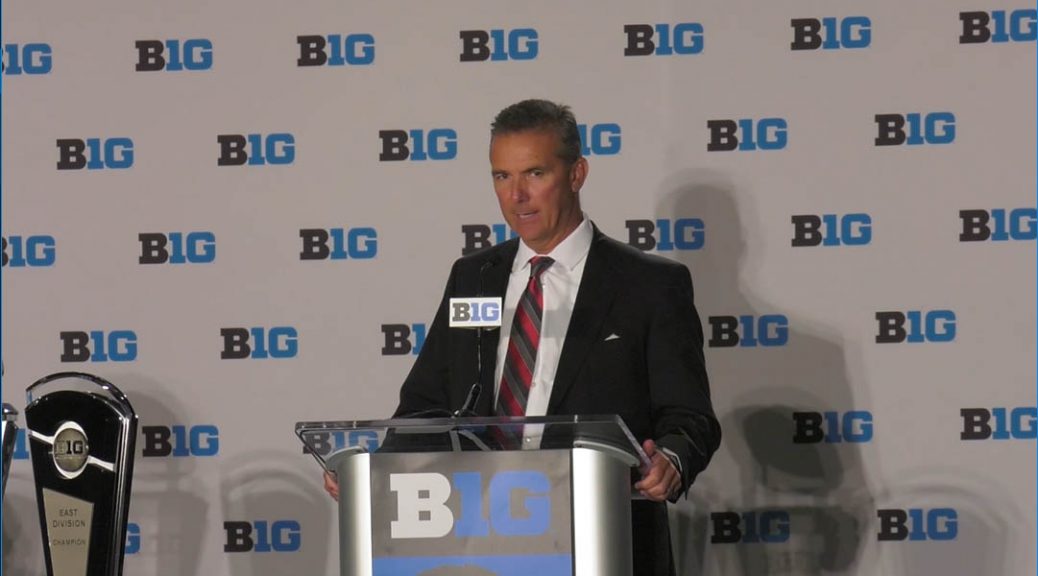 Our reporters weighed on on both coaches and how one team is looking to heal after a death in the off season. 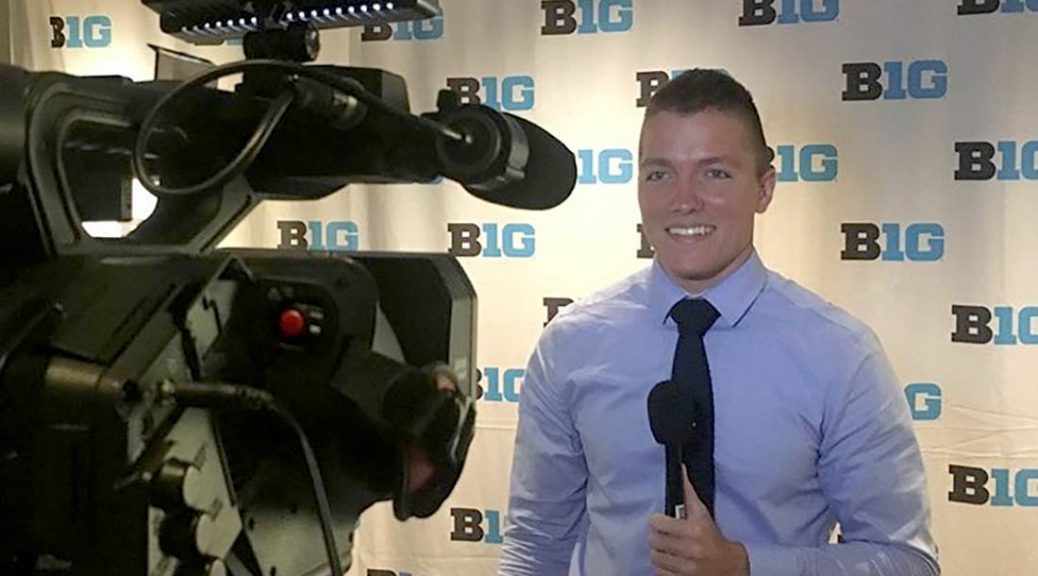 Big Ten conference head football coaches stepped up to the microphone to face the media and talk about their upcoming seasons. The Medill Reports sports team was at the 2018 Big Ten Media Days as well.

HAVANA – Halfway through our nine days in Cuba, when a colleague and I find a bilingual magazine on Cuban entrepreneurship, we are intrigued at its very existence.

Itself a fledgling media start-up, Negolution’s aim to cover business-culture in the country is far removed from the state-run style and socialist ends of Cuba’s one-party system.

But the magazine we learn, is now close to two years old. Run by Marta Deus, 31, and Rigo Garcia Berriel, 26, Negolution covers a range of stories—from profiles of up-and-coming Cuban businesses to interviews with established international entrepreneurs. It also disseminates information useful to all possible stakeholders inhabiting a brand-new ecosystem within the Cuban economy: private businesses.

Deus and Berriel ensure that the magazine is printed in Spanish and English— an important marker of their ambition in a country that branded the United States as “Yankee imperialists” and constricted English education after the 1959 Cuban revolution.

“English is the language of business. We think entrepreneurs should know English,” says Deus. “We were very clear about this from the beginning.”

END_OF_DOCUMENT_TOKEN_TO_BE_REPLACED 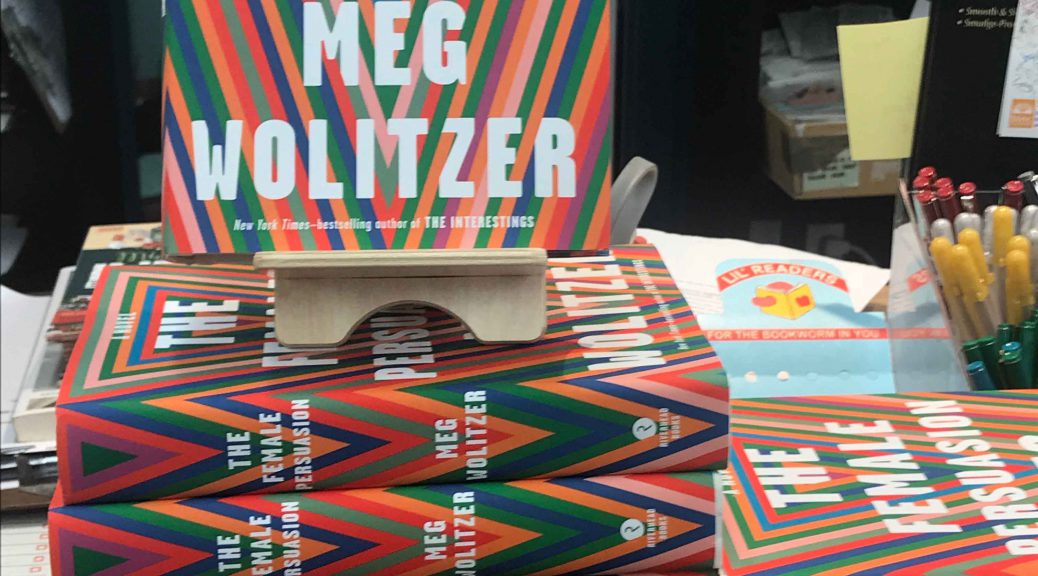 Seating was difficult to come by at the Meg Wolitzer author talk held by Women and Children First bookstore in the Andersonville neighborhood of Chicago on April 24.

The event was crammed with aspiring authors, feminists and aspiring feminist authors alike clamoring to get a look at literary greatness. Those who failed in the game of musical chairs were sprawled on the wooden floor with their Moleskine notebooks, craning their heads to get a peak at Wolitzer in conversation with Greta Johnson, a Chicago-based journalist and WBEZ host. When even floorspace ran low, some attendees plopped themselves on the stepping stools meant for reaching the highest bookshelves, while others leaned against bookcases.

END_OF_DOCUMENT_TOKEN_TO_BE_REPLACED 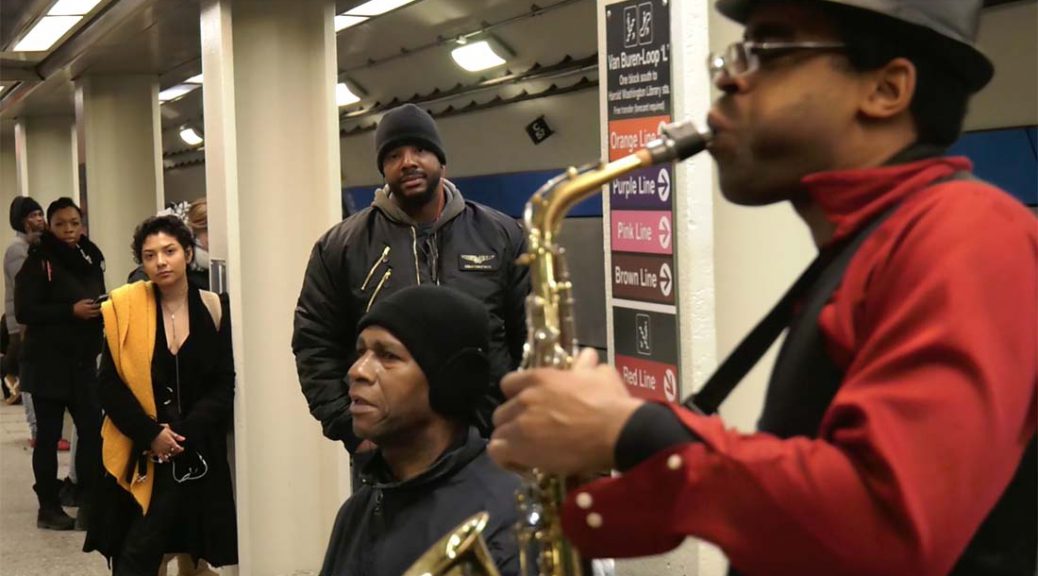 When commuting on the L, we often find ourselves being serenaded by the musical artistry of some of Chicago’s musicians. Whether they’re seasoned musicians or still working on their craft, they always entertain in one way or another.

This story looks at this experience from the musician’s perspective and what they get out of the experience to perform for you before your ride home. 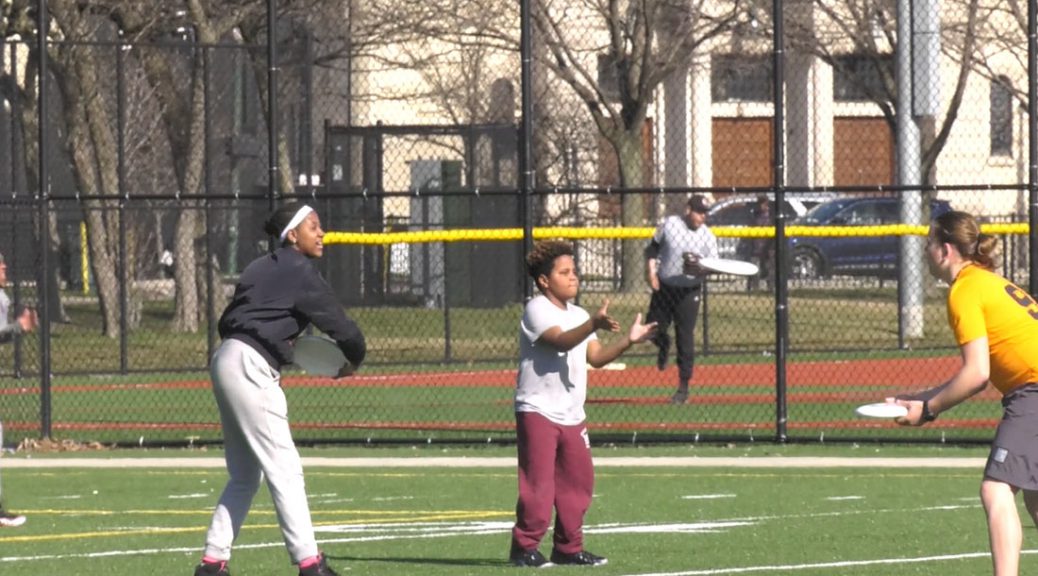 Chicago has a professional ultimate Frisbee team, the Chicago Wildfire. Professional Ultimate Frisbee is played within the American Ultimate Disc League (AUDL), comprised of teams all across the country including three Canadian teams.

With a large youth movement of the sport in the Chicago suburbs, the Wildfire is reaching out to all parts of Chicago to spread their love for the sport.

It’s early in the season for the Wildfire and they’re looking to make a run for the 2018 AUDL Championship.

END_OF_DOCUMENT_TOKEN_TO_BE_REPLACED 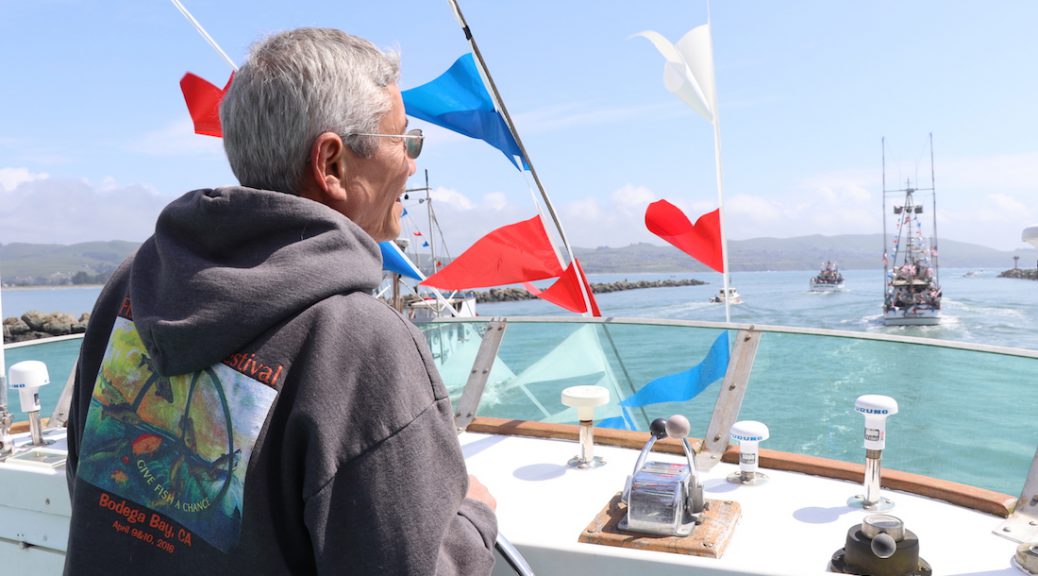 The Karen Jeanne rocks and sways as Dick Ogg steers out of Bodega Harbor, past the rocky breakwall where surf-casting fishermen wave from their perches.

Behind him, an array of boats fall into line, each decorated with signs and flags, their decks full of fishermen, families and friends. To some this route is a familiar morning commute, the first turn on a many-miles journey in pursuit of albacore tuna, salmon, Dungeness crab or sablefish, depending on the season. To commercial fishermen the harbor marks the safe haven after a dangerous journey. For others, today offers a rare boating adventure – a chance to picnic, take photos and crack open a beer before noon.

AN OCEAN IN TRANSITION

But today is about more than just socializing. It’s day two of the 45th annual Bodega Bay Fisherman’s Festival and time for the annual Blessing of the Fleet, a centuries-old tradition which began in predominantly Catholic, Mediterranean fishing communities. According to tradition, a priest or pastor blesses the community’s fishing boats to ensure a bountiful harvest and safe return to the harbor.

Dick Ogg’s slender build, kind expression and his smooth, tanned skin makes him appear younger than his 65 years. He estimates that he has attended the blessing for more than 25 years, though he’s lived in Sonoma County for much longer, moving here with his family when he was 7. The retired electrician once used fishing as a way to supplement his income, but now he’s taken to the water full-time.

Ogg tells the story of a friend who was run over in a shipping lane, and another who passed away out at sea. But death is only one kind of tragedy that strikes the area’s fishermen.

In Bodega Bay, the blessing tradition began nearly 60 years ago and marked the start of a once-fruitful salmon season. But as regulators scramble to protect declining salmon populations, the season has become shorter and shorter. The California Fish and Wildlife announced earlier this month that commercial salmon fishing in this area would open late – not until July 26 –  and would run for barely two months. The late start cuts the commercial season in half, and with it the chance to make a living.

“The salmon fishery has been diminished to the point that there’s not enough money to make it through the season,” Ogg says, adding that Dungeness crab is the only fishery remaining that provides close to enough money to support working fishermen in the bay. And even then the owners of boats often can’t afford full-time employees when crab season slows.

“I have some bills that aren’t going away,” says one of the crew members on Ogg’s boat.  He tells me about his fear of a less-than-lucrative salmon season and his plan to seek summer work in Alaska’s more fruitful Bristol Bay or as a tuna fisherman in his native Atlantic waters off the east coast.

He says he’s not planning to wait to find out how the salmon yield. He’s already contacted several commercial fishing vessels in hopes of hopping aboard.

For now Pacific salmon join red abalone and Pacific halibut on the list of closed California fisheries. This year marks the first-ever closure for recreational red abalone, though the commercial fishery has been closed since 1996 and other abalone species placed on endangered species lists.

As the boat turns the bend, dense waves crash against Bird Rock, a local landmark named for the persistent birds that land on its surface, their white waste leaving a kind of organic graffiti on the gray stone. The skies are a brilliant blue, but dark clouds linger at their edges, a reminder of the dangers that lurk in open oceans.

Out on the water the harbormaster radio announces the start of the ceremony. The priest leans over a woven flower wreath and the prayers begin.

On board the Karen Jeanne, the crew goes silent, necks craned as all listen to the Lord’s Prayer, reminders of fishermen past and a few references to Jesus and his admiration for fishermen.

Ogg steers the boat closer to the action. “I could use all the blessing I can get,” he says.

As storm clouds cover the sun and boats speed back to the safety of the harbor, the priest blesses each boat, scattering holy water from a gold chalice into the salty air. Before he’s fully docked, raindrops speckle Ogg’s glasses and guests duck into the cabin, reminded of the uncertainty of nature and life on the water.

Photo at top: Fisherman Dick Ogg steers his boat the Karen Jeanne to the Blessing of the Fleet ceremony on Bodega Bay. (Rebecca Fanning/Medill) 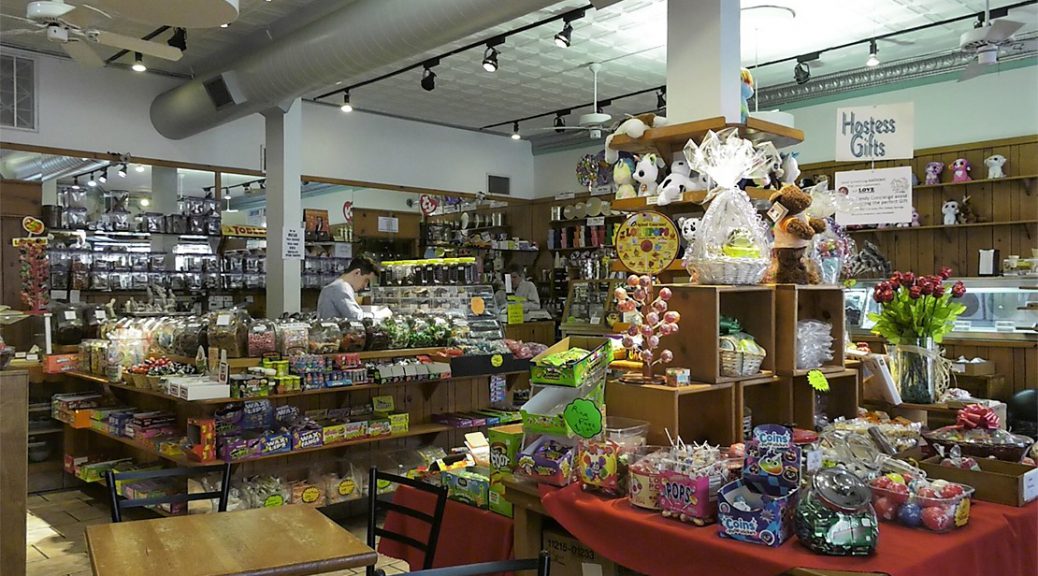 Customers at Windy City Sweets come for the variety of handmade fine chocolates and candies, but they also get a unique experience.

END_OF_DOCUMENT_TOKEN_TO_BE_REPLACED 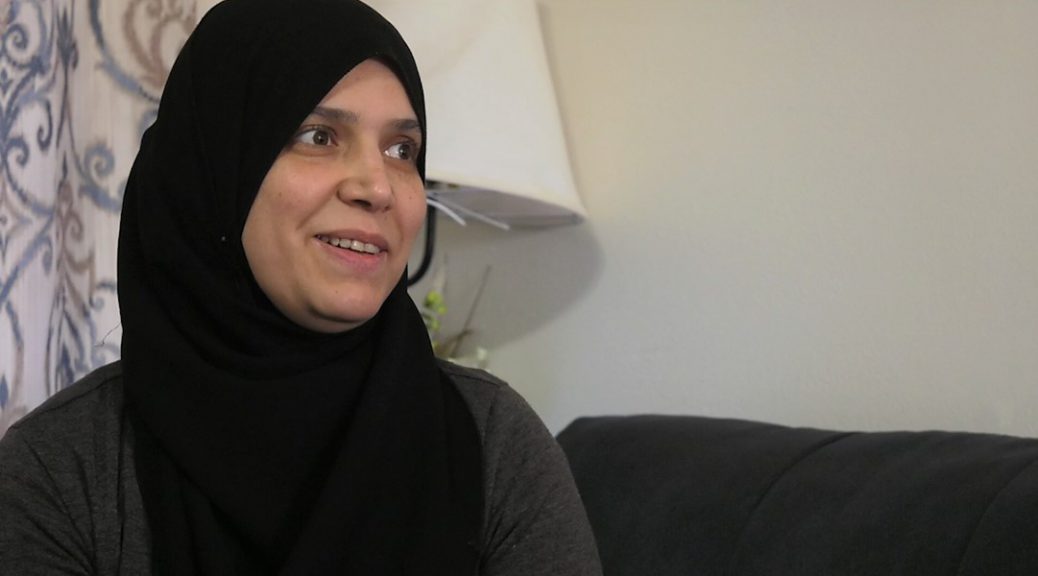 The journey of Hanan Fayoumi and her four children from Damascus, Syria to Rockford was full of struggles and unpredictability.

She left her home with her husband and kids after violence escalated in 2012 and went to her parents’ big house in a safe village. They stayed with all of her siblings and their families who fled their houses too.

END_OF_DOCUMENT_TOKEN_TO_BE_REPLACED

At the Annoyance Theater, a place known for celebrating more absurd brands of comedy, Matt Damon Improv is doing something that shouldn’t be absurd, providing a place for women of color to perform freely in the acting community. Their variety show tackles social, racial, and cultural issues every Sunday Night at 9:30 pm.