All 21 DNA samples from a series of female homicides that have occurred in Chicago since 2001 have been analyzed, a Chicago Police Department representative confirmed. However, the results complicate the theory that a serial killer is behind 50 unsolved strangulation and asphyxiation cases.

None of the 21 samples cross match to each other, nor do they match any of the DNA profiles of identified criminals in the FBI’s database, the representative said.

The Murder Accountability Project, founded by veteran investigative reporter Thomas Hargrove, was the first agency to sound alarms that a serial killer might be on the loose. The Virginia-based, nonprofit investigative group previously spurred law enforcement to reopen homicide investigations in Youngston, Ohio and Gary, Indiana. Hargrove’s research helped identify and arrest Darren Deon Vann, a prolific serial killer in Indiana, in 2014.

Identifying a serial killer in Chicago has proven more elusive, and Hargrove expressed his frustration with the results of the DNA analysis.

“DNA has not been the magic bullet that we all had hoped for, especially the Chicago police,” Hargrove said.

Out of the 50 unsolved cases, only 18 yielded the 21 DNA samples. Hargrove pointed out how unusual this is for cases of strangulation and asphyxiation, both very physical crimes.

“The fact that there is such a low rate at which DNA has been obtained is suggestive,” Hargrove said. “It’s possible this killer or killers are pretty intelligent and are aware not to leave their DNA behind.

Brenda Meyers-Powell of the Dreamcatcher Foundation, a nonprofit agency working to end human trafficking, agreed that the lack of DNA must be investigated.

“That needs to be looked at,” Meyers-Powell said. “Why isn’t there DNA?” 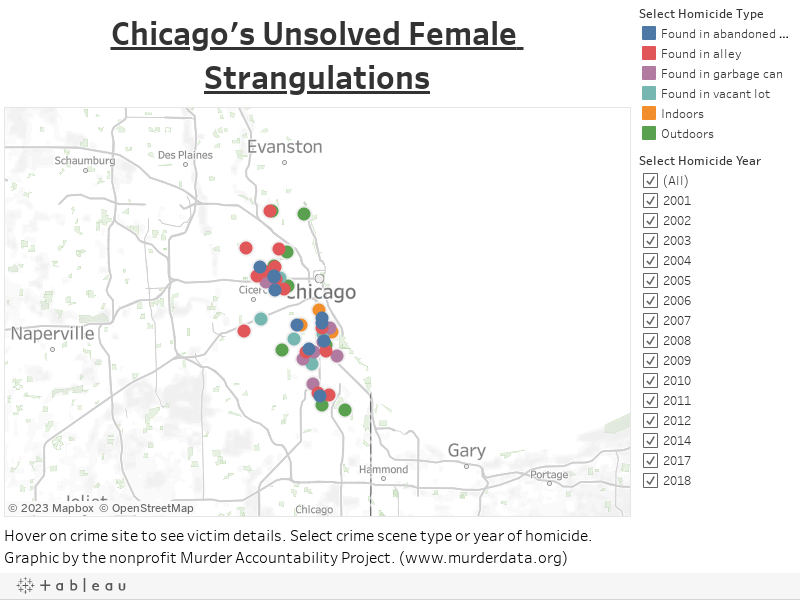 The Murder Accountability Project first alerted CPD of a potential serial killer in 2017, but the department did not immediately act due to understaffing and underfunding. In 2019, the Murder Accountability Project released a cautionary report at the behest of the Chicago City Council. The report, which pointed out glaring similarities among the Chicago murders, spurred the FBI and CPD to form an investigative task force.

Chicago’s cluster of unsolved female homicides is the largest in modern history and demonstrates striking patterns. Nearly all of the women were murdered outside or in abandoned buildings, though usually women are killed indoors by partners or family members, Hargrove said. This implies the killers and victims were strangers to one another.

Most of the killings occurred on Chicago’s South and West Sides, with a pronounced north-to-south pattern along South Indiana Avenue in Bronzeville. This might indicate a mobile killer with knowledge of Chicago streets, Hargrove said.

Over three-fourths of the murders involved sexual components, according to the Murder Accountability Project, and CPD reported that many of the women had histories of sex work, illegal drug use or both.

Confidential information provided by witnesses gives CPD reason to believe there are two or three serial killers at work.

To Hargrove, the evidence is indisputable.

“These 51 women were not killed by 51 separate men,” Hargrove said. “Many of these [women], probably most of these were killed by men who have killed before.”

CPD would have benefited from this information years ago, but massive backlogs at the Illinois State Forensic Labs delayed analyses over 30 years in some cases. The backlogs resulted from miscommunication between labs and the court system; inadequate training of law enforcement, attorneys, and judges; equipment procurement issues; underfunding and understaffing, according to a 2019 report from the Governor’s Forensic Science Task Force.

The Illinois State Police has made improvements to the labs, including an online sexual assault kit tracking system, and there has been a 33% reduction in its biology and DNA backlog, according to an ISP press release.

But the backlog persists. Carrie Ward, the executive director of the Illinois Coalition Against Sexual Assault, fears future backlogs will disproportionately affect survivors.

“We worry about statutes of limitation for reviewing information,” Ward said. “We don’t think any survivor should have to have their case thrown out because of timelines that weren’t met through no fault of their own.”

Meyers-Powell of the Dreamcatcher Foundation said the longer the investigation is delayed, the harder it will be for the deceased women’s family members.

“We’re leaving a lot of people in pain,” Meyers-Powell said. “These girls were somebody’s mothers, sisters, cousins and aunties.”

Kira Leadholm is a social justice and investigative reporter at Medill. You can follow her on Twitter at @LeadholmKira.