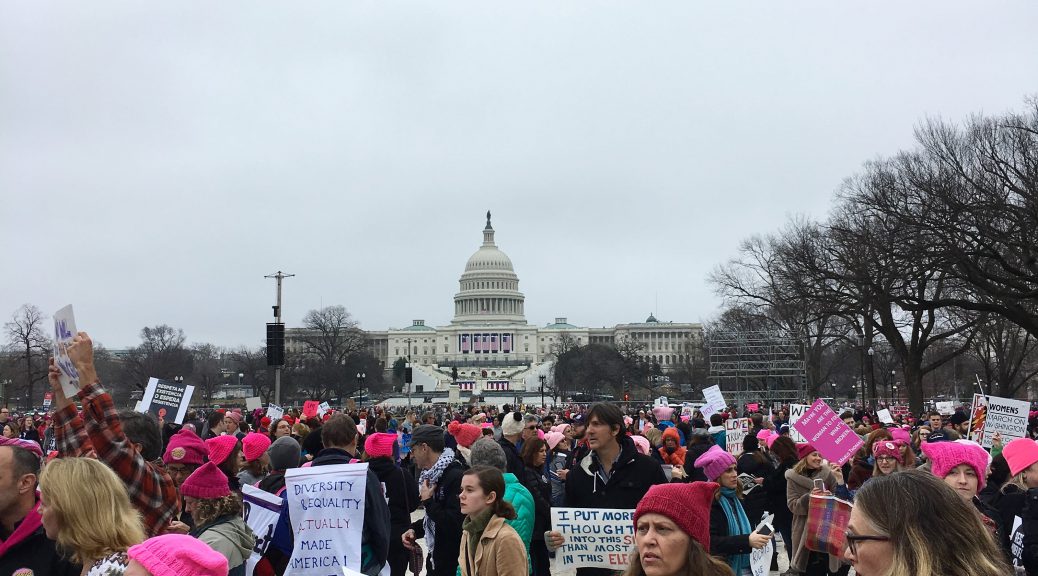 The Democratic Socialists of America brought a unique perspective on feminism along with their flyers and signs to the Women’s March on Washington.

DSA members at the March were only a drop in the massive bucket of humanity. They converged on Washington and across the nation last weekend, but they proclaimed their mission with stark red flyers reading “Working Women of the World Unite.”

Rachel Paneth-Pollak, the head of the group’s D.C. chapter’s socialist feminism subcommittee, described the way the group views feminism as inseparable from their core vision of economic equality.

Paneth-Pollak, 36, elaborated on the group’s dedication to intersectional feminism — a term coined by UCLA School of Law professor Kimberlé Williams Crenshaw in the late 1980s to describe a feminism that recognizes its links to racial, class-based, and other forms of oppression.

“The Women’s March… really emerged in solidarity with other movements whose containment capitalism depends upon — like LGBTQ rights, Black Lives Matter, immigrant rights, etc., and that kind of solidarity — not joining for only one cause or another, but really toward a vision for society, is what democratic socialism is about.”

Clara Alcott, 38, a member of the group’s Chicago chapter who participated in the Chicago Women’s March, echoed Paneth-Pollak’s intersectional viewpoint. She said the group’s rapid growth and the enthusiasm of its members makes it easy to organize around social justice issues.

Alcott said that membership in the Chicago chapter has exploded since Inauguration Day. Peg Strobel, 70, is a member of the group’s national steering committee who has been with the group since the late 1970s, before its official formation out of two older socialist organizations. She took a historical perspective on DSA’s rapid growth and the new challenges it faces.

“DSA as an organization is growing monumentally, just online, 450 people joined online on Inauguration Day and the day of the Women’s March… but the forces we’re fighting are growing as well, and they are emboldened and empowered by Trump as president,” Strobel said.

“The work we have to do started in the early 1980s, and the threat has evolved,” she said. “It’s a threat of neoliberal parties, and the notion that while you want a free market you also want to not have individual freedom in people’s personal lives.

“We in DSA have to figure out how to make them understand that a socialist feminist country is a stronger world for everybody.”

The Chicago DSA held a capacity welcome event for new members Saturday at 850 W. Jackson Blvd. The group will mobilize nationally for both the Climate March in Washington, D.C., on April 29, and May Day activities across the country.

‘We can’t take this sitting down’: a Socialist Group’s Moment of Resistance

Scenes from the DSA’s Inauguration Protests

Photo at top: Non-DSA protesters gather in the shadow of the Capitol before the Women’s March on Washington. (Derek Robertson/MEDILL)