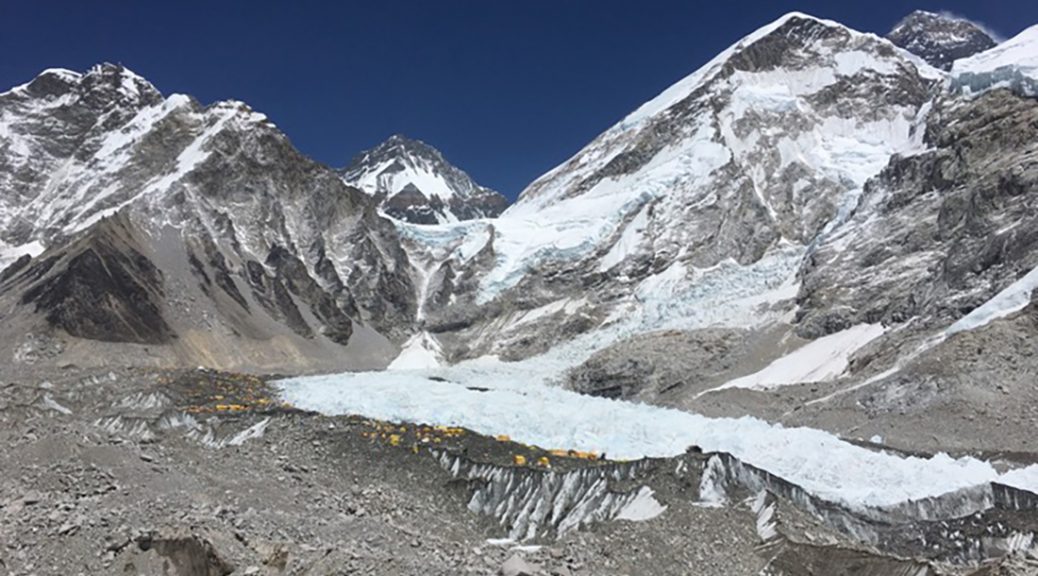 The Khumbu Glacier in the Himalayas retreated rapidly in the past, offering clues to how the glacier will behave in the future, University of Maine research suggests.

Laura Mattas, a master’s student at the university, conducted field research this summer on the Khumbu Glacier in Nepal. She presented her research this fall at the Comer Climate Conference, an annual meeting in Wisconsin of climate scientists from across the country.

According to the National Snow & Ice Data Center, glaciers globally are retreating at “unprecedented rates.” A glacier can retreat by shortening in length or by thinning. In the Khumbu Valley, Mattas and her colleagues found moraines, which are rock and other sediment that were inside, on top of or below a glacier and that were altered by the glacier. The location of the moraines indicated that the glacier retreated quickly at some point since the last ice age. Mattas said that the glacier is able to undergo a “large and rapid change,” which means that it may also change rapidly in the future.

“If that’s the case, that’s a lot of meltwater that’s flowing down valley,,” she said. “Who knows if there’s the infrastructure to deal with” the surge.

Mattas and other researchers collected 77 samples of rock from the valley, which can demonstrate how the glacier has behaved from the last ice age to today.

“That could predict what the future warming of this area looks like,” she said, “because if it’s known to go fast and just give all that meltwater, then it could be predicting that this glacier is … going through an irreversible retreat.”

Mattas said she and the research group found moraines at a village called Dingboche and at a nearby settlement called Lobuche. A scientist previously found that the moraines in Dingboche were formed during the last ice age. The moraines at Lobuche, on the other hand, are more modern, but Mattas still has to determine their exact date.

The scientists did not see any moraines between Dingboche and Lobuche.

“As we walked from Dingboche to Lobuche, there was absolutely nothing,” Mattas said.

The lack of moraines between the two locations suggests that the glacier melted quickly. If the glacier had retreated more gradually, it would have formed moraines about every few thousand years, so the terrain would show several lines of moraines in the space between Dingboche and Lobuche.

Mattas said a glacier has to sit in one place long enough to form moraines. But in this case, the glacier moved too quickly.

Mattas’ conclusion that the Khumbu Glacier retreated quickly is a preliminary field observation, but it still needs to be supported by data. The samples of rock that Mattas and her colleagues collected may provide the evidence needed to back her claim. They retrieved the rock by drilling holes in boulders. The scientists will employ a technique called Beryllium-10 dating, which can tell them the age of the moraines. This age gives researchers an approximation of when the glacier retreated, according to Mattas.

Sidney Hemming, a professor of earth and environmental sciences at Columbia University, said she agrees that in order to accommodate the researchers’ observations, there had to be a “really quick retreat.” Hemming said that it does not really matter what the ages of the two moraine belts are.

“The fact that there’s this big space in between them with no moraines in there means that there had to be a rapid retreat, right?” she explained.

Mattas said she and other researchers are currently studying the past so they can learn what the Khumbu Glacier is capable of doing in the future.

“We’re trying to see how it reacted in the past,” she said, “and from that data, we hope to then use a predictive model to see if that is possible in what we’re seeing today.”

Photo at top: The Khumbu Glacier retreated rapidly at some point between the last ice age and today, and Laura Mattas is trying to determine the exact date of the retreat. She and her colleagues conducted research in the Khumbu Valley as a part of National Geographic and Rolex’s Perpetual Planet Extreme Exhibition: Everest. Photo courtesy of Laura Mattas.