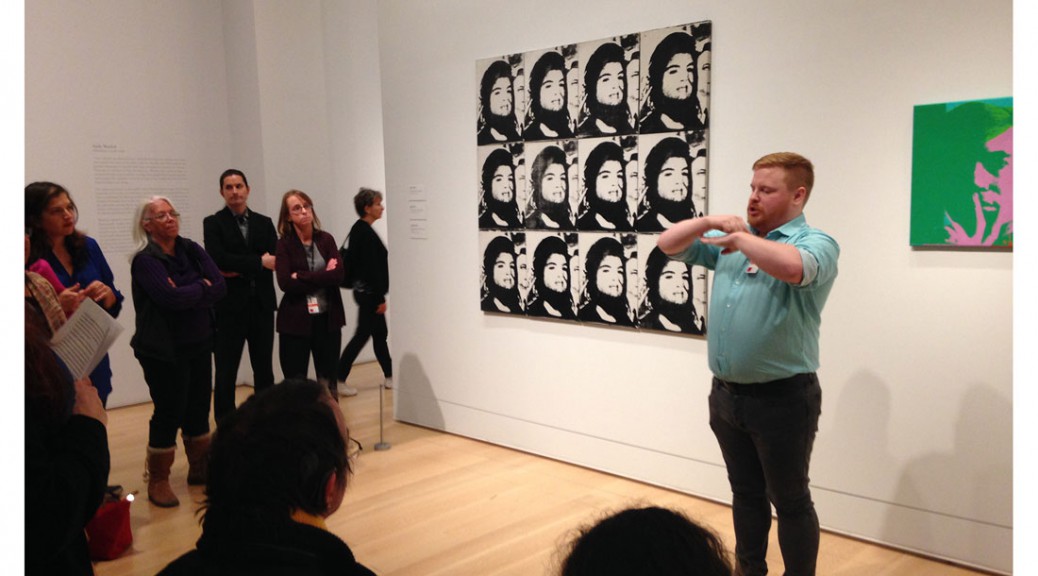 Jonathan Sondergeld pauses in front of Andy Warhol’s “Twelve Jackies” in The Art Institute’s modern and contemporary art gallery so his tour group can catch up with him. After a quick conversation in American Sign Language (ASL) with his fellow tour guide, he turns to the assembled.

“Can everyone see me?” he signs.

An interpreter speaks Sondergeld’s words aloud for any hearing patrons on the tour. Satisfied, he launches into an expressive description of the painting behind him, communicating its history and tidbits about Warhol’s creative process with sweeps of his hands.

This is one in a series of Sign Language Gallery Talks, a year-old monthly cultural program at the Art Institute for deaf and hard-of-hearing people. The program draws a core group of deaf patrons, as well as those looking to practice their sign language skills.

Sign Language Gallery Talks are part of a broader movement in Chicago to make cultural programming more accessible to people with disabilities. The Americans with Disabilities Act (ADA) just turned 25, and advocates have parlayed the occasion into a movement to increase cultural accessibility in Chicago.

“It’s been fantastic – the response from the deaf community has been phenomenal,” Sondergeld says through an interpreter. “As a deaf person, it’s just unbelievable that this is available now. There was nothing like this before.”

Among those practicing ASL was Elesheva Soloff, who is hard-of-hearing but communicates primarily through speech and lip-reading.

“I love events like these – I learn more about the art,” Soloff says. “I love coming to this, because it’s accessible and inclusive.”

As founder and co-chair of the Chicago Cultural Accessibility Consortium, Christena Gunther spearheaded the 25 for 25 initiative to get at least 25 cultural organizations to become more accessible through dialogue with one another and disability righs advocates. Thirty organizations responded.

“We saw the ADA 25 Chicago initiative as an opportunity to get all these organizations motivated and educated and on board with respect to accessibility,” Gunther says. The initiative “helps organizations know that they won’t get total accessibility overnight: they have to work towards their goals with baby steps.”

Steppenwolf Theatre Co. has offered a Touch Tour program for blind and low-vision patrons for the past five years. Participants arrive 90 minutes before the start of a production and take a tactile tour of the set, as well as speak to actors in character. The theater also provides subscribers with audio-recorded or Braille versions of each Playbill.

While blind patrons listen to the play, a professional describer narrates the action to them via headsets provided by the theater, working to capture each scene without speaking over lines of dialogue.

“The main actors having distinctive voices makes a huge difference,” says Micky Holdsworth, a blind Touch Tour subscriber. “And my sighted friends who come with me on the Touch Tour, they all say, ‘I wouldn’t have noticed any of that.’”

The Touch Tour program is in large part the brainchild of Evan Hatfield, director of audience experience. Hatfield says the Touch Tour is always evolving to accommodate subscriber needs, which include coordinating drop-offs and pick-ups with PACE buses and combining the use of description and sound enhancement for patrons who are both blind and hard-of-hearing.

“The blind and low-vision community is a community that’s not used to going through the world and having people make it super easy for them to be there,” Hatfield says. “This is kind of giving patrons permission to ask for what they need, and it’s also being attentive to those needs.”

According to Karen Tamley, commissioner of the Mayor’s Office for People with Disabilities, many organizations see accessibility as an uphill battle. Some dismiss disability programming as cost-prohibitive or logistically impossible.

“There’s a shift in mindset that needs to happen, and different cultural institutions are in different places with respect to this,” Tamley says.

For example, the Museum of Science and Industry has made most of its exhibits wheelchair accessible, but only some of its media pieces are close-captioned for the hearing impaired and it does not offer Braille text as part of any of its exhibits. The museum has no disability-specific programming, urging guests with disabilities to call ahead and plan their visits with museum staff.

“There isn’t a one-size-fits-all solution,” says Katie Schweiger, MSI’s specialized services manager. “It works better for our institution on a case-by-case basis.”

In reality, says Marca Bristo, accessibility can only be a boon for arts and cultural organizations looking to expand their audiences.

“There’s still a lot of theaters in this city that aren’t wheelchair accessible, for instance,” says Bristo, whose organization advocates on behalf of the disabled. “Our hope is that as they grow and move, they will become so. Because this is a big untapped audience.”