Ask the Astrologers: Celestial predictions about spring in Chicago

You may be familiar with your personal zodiac sign, but did you know cities have astrological associations too?

Many astrologers consider Chicago a Leo because several of the city’s key “birth” events occurred in early August. With this Sun sign, Chicago exudes an energy that is creative, courageous, and playful, making it the center of attention — and the country.

But one does not have to be a Leo to benefit from understanding how the city’s future occurrences may be written in the stars. Chicago-based astrologer Sarah Pickett likens knowledge of astrological events to a weather prediction, with insights that can aid all Chicagoans, regardless of their personal Sun sign.

“You can either go outside without checking the weather and take your chances, or you can check the weather before you go out and dress appropriately,” Pickett said. “You can move to a city without knowing anything about it, or you can take a look at the (synergy) between you and the city and have an (idea) of pitfalls and opportunities.” 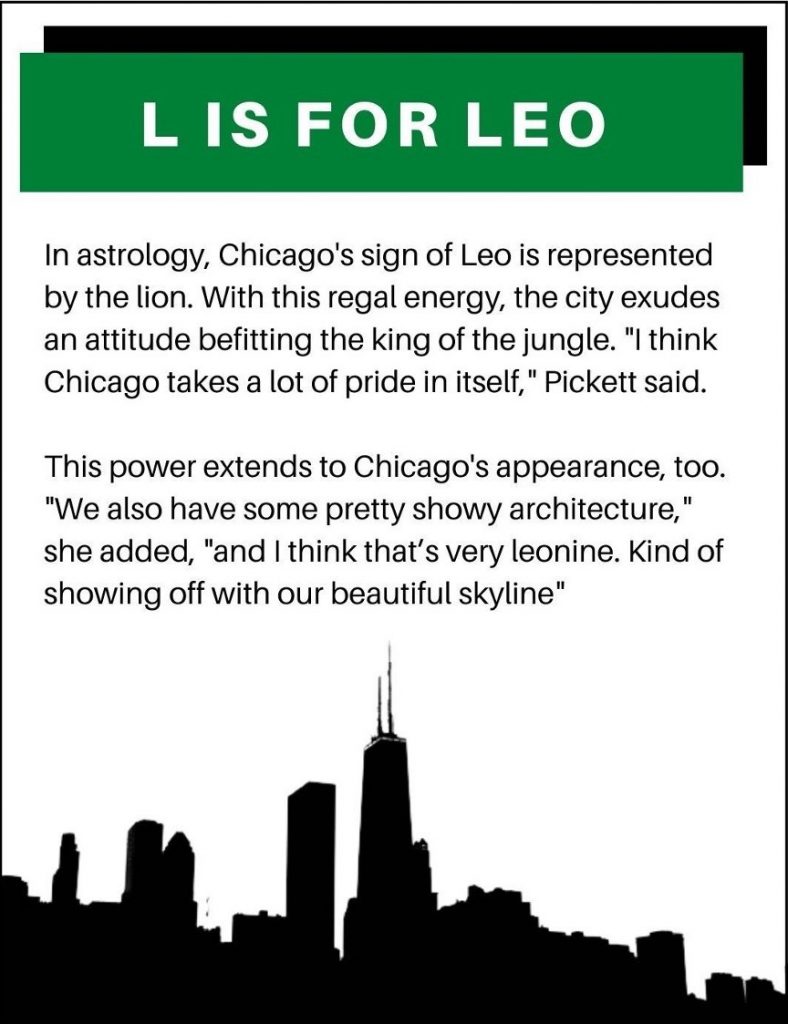 The alignment. Two sets of planetary alignments spell out success for Chicagoans this spring, according to astrologer Karen Yatsko. Saturn, the planet of hard work, will move into the exact celestial position that Uranus, the planet of innovation, was in at the time of Chicago’s incorporation into Illinois. The same will happen between Pluto, the astrological planet of healing and endings, and Neptune, the planet of dreams and art. This alignment between Pluto and Neptune will occur again in December.

What does it mean? Chicago’s entry into spring will bring about the start of a major project and the drive to make it happen. “This is a moment to really dig deep and decide what we want to keep and what we want to change — real ‘go for it’ energy,” Yatsko said. “Dreams can become reality.”

Your move. Chicagoans may feel stuck if they simply try to forge ahead without a plan, Yatsko says, so careful consideration is key.

The alignment. Today’s most significant astrological event, according to Pickett, is what experts call the Saturn-Uranus square. The process of the two planets’ separation and subsequent unification began last year and will end in early 2023. Because Chicago’s Sun is in the direct path of this transit, the city will enter a “pressure cooker” state this spring, Pickett said.

What does it mean? A city’s Sun is often associated with its leader, so Mayor Lori Lightfoot is set to bear the brunt of this upcoming discord, according to Pickett. Lightfoot has been no stranger to pressure over the last few months as she navigates deteriorating relationships with local officials and the city’s increasing crime rates. However, Pickett points out that from an astrological perspective, much of the strife has less to do with Lightfoot personally and more to do with the moment at which she took office.

Your move. When advising Chicagoans on how to manage rising tensions, Pickett returns to the weather prediction analogy: “If you know it’s going to rain, you wear a raincoat, right?” Because the Saturn-Uranus cycle will not end for another year, Pickett encourages city residents to remain alert and attuned to the city’s concerns. “It’s a raincoat moment for sure,” she said. 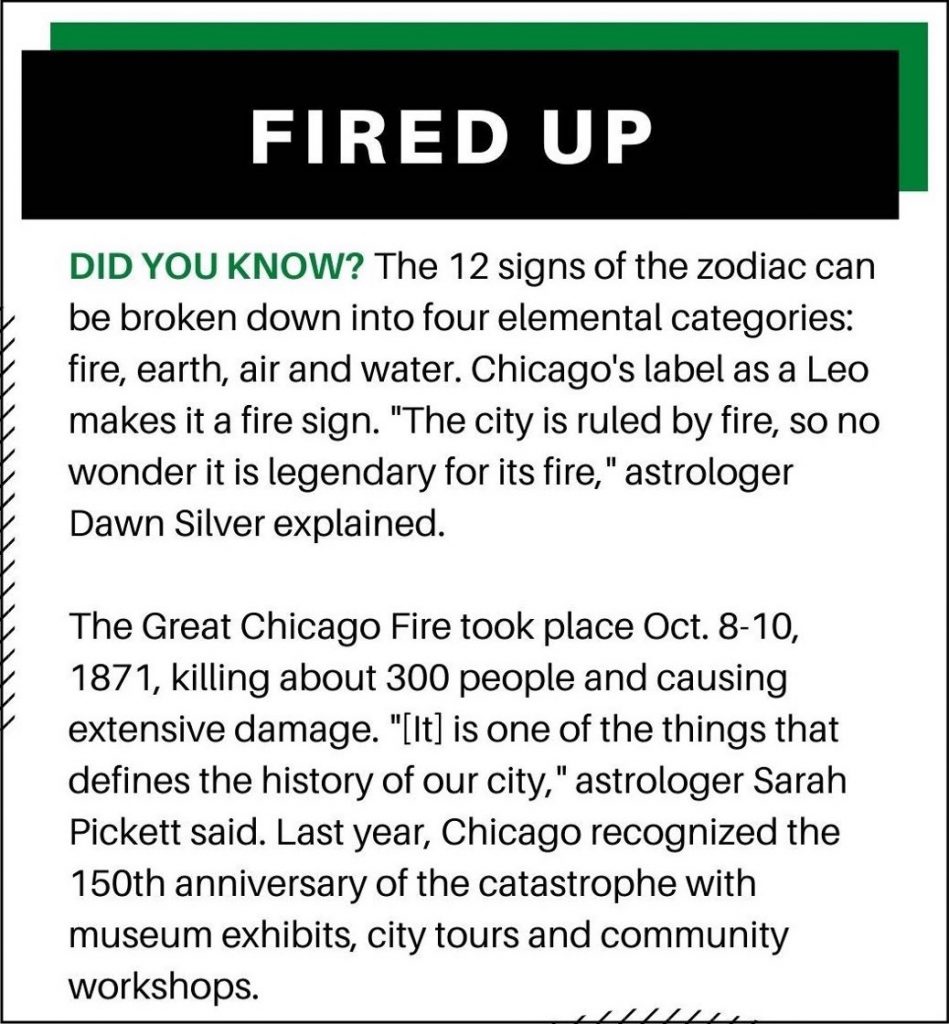 The dawn of a “new world”

The alignment. Chicago’s chart, according to Yatsko’s reading, shows three planets making big moves: Neptune in Pisces, the sign of dreams; Saturn in Aquarius, the sign of inventiveness (and chaos); and Pluto in Capricorn, the sign of hard work.

What does it mean? This trio indicates the creation of a “new world,” Yatsko says. But she notes that change, however positive, won’t come easily to Chicagoans, as Leo is considered a fixed sign because of its firm position in the middle of the summer season.

Your move. Chicagoans who crave solidity should do all they can to find their comfort, Yatsko says, even if it feels like the world is shifting beneath them. “We have to look around us, pick up what we see and make it into something new and beneficial,” she said. “That empty lot? Make it a garden. That sort of thing.”

Alyssa Haduck is a sports media graduate student at Medill. You can follow her on Twitter at @Alyssa_Haduck.