Chicago-based CBOE Holdings Inc. is riding high on its just-completed $3.4 billion acquisition of Bats Global Markets Inc. as analysts and investors focus on the global markets and cutting-edge electronic trading technology that CBOE gains in the deal.

Optimism about the newly combined company has overcome concerns about falling profit and rising expenses at CBOE in the past year that are expected to continue in 2017.

Seven out of 13 analysts surveyed by Bloomberg suggest that investors buy shares of CBOE, compared with one out of 15 in the year-ago period. Demand for the shares may also get a boost from their inclusion, announced Monday, in the Standard & Poor’s 500 index.

Wall Street is betting that the Bats acquisition will more than offset a decline in volume in recent months stemming from historically low market volatility. Exchanges such as the CBOE derive revenue from each transaction done through the exchange.

“We believe that the resulting combination will allow us to cement CBOE’s position as the go-to partner for developing cutting-edge trading and investment solutions,” Edward Tilly, chief executive officer at CBOE Holdings, said in a press release Wednesday.

Optimism about the acquisition, first announced in September, is reflected in the company’s shares, which were trading at $79.3 Wednesday afternoon, up 26 percent from $63.07 the same day a year ago. During the same period, the S&P 500 index rose 21.3 percent.

The acquisition of Bats and its ongoing integration process are the “biggest business challenge and opportunity” for CBOE in 2017, Suzanne Cosgrove, director of Corporate Communications at CBOE, said in an email.

The acquisition will expand CBOE’s product line and broaden its geographic reach to include international markets.

Bats, the second-largest U.S. equity operator with average daily volume of 1.52 billion shares in 2016, commanded 20.6 percent of the U.S. equities market share and was the largest exchange-traded fund, or ETF, operator throughout 2016. Its European equity business garnered 23 percent of Europe’s equity market share in 2016.

The acquisition is complementary for CBOE, the largest U.S. options exchange, and Bats, said Richard H. Repetto, analyst at Sandler O’Neill + Partners L.P., who has a “hold” rating on CBOE’s shares. CBOE has proprietary index products, including the Standard & Poor’s 500 indices and the volatility, or VIX index, while Bats specializes in ETFs, Repetto explained in a phone interview.

Worthington added that he believed CBOE will grow its popular VIX franchise to strengthen revenue.

In the short-term, though, the acquisition is adding to the exchange’s challenge of rising  expenses. 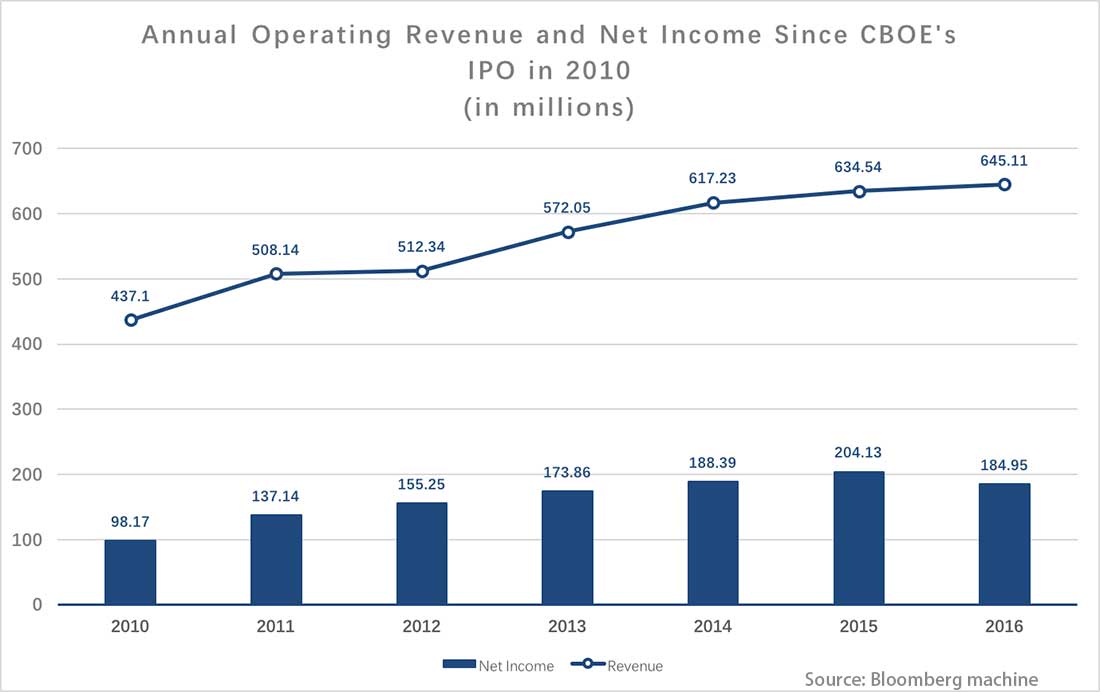 CBOE reported $45.2 million fourth-quarter net income on Feb. 6, down 10.4 percent from $50.4 million a year ago. For the full year, net income fell 9.5 percent, primarily due to increasing operating expenses.

Royalty fees primarily consist of license fees paid for the use of indexes, such as the S&P 500 Index, used in CBOE’s proprietary products like S&P 500 index Options.

Costs related to the Bats acquisition led to a $13.7 million increase in operating expenses, making up 31.1 percent of the total operating expense increase, according to the company’s 2016 annual report released on Feb. 22.

Expenses will be incurred going forward as CBOE integrates Bats and its technology platform, Alexander Blostein, analyst at The Goldman Sachs Group Inc., said in a note on Feb. 6.

CBOE forecast in its fourth quarter financial release that its core expenses will grow to $214 million to $218 million in the full year of 2017, an increase of 3 percent to 5 percent.

Some of the synergies can be realized easily, like management redundancy and things like outside auditors or insurance, said Dean in the fourth-quarter earnings conference call, but the platform migration will take time.

“We are diligently working on the integration process but it’s a three-year goal,” he said.

Despite the integration challenges, Repetto said he is optimistic, pointing to “strong operators” who will navigate the complexities at the two companies.

CBOE’s roots are in open outcry trading and it still maintains a handful of trading pits at its Chicago Board Options Exchange in Chicago, which it does not plan to shut down in the near future.

As users embrace technology, there will be more migration to electronic trading, but CBOE will continue to give customers the choice to trade through either open outcry or the electronic platform, said Tilly in the forum.

One major headwind in 2016 that has persisted into 2017 is the low market volatility that tends to suppress activity in derivatives, such as options. Volatility rises when equity prices swing wildly or fall sharply.

Since the election of President Donald Trump, though, the VIX index has been near historic lows. It stood at 12.46 Wednesday afternoon, compared with an average of 19.03 since February 2014.

Near-record low VIX so far in 2017 has led to a 6 percent to 8 percent decrease in CBOE’s index options and VIX futures volumes, Blostein wrote on Feb. 6, but she views volatility as a “coiled spring,” poised to bounce back.