The only thing keeping Asian carp from escaping  into Lake Michigan is an  electrical barrier located along the river.

The barrier doesn’t actually electrocute the  fish, but repels them when they encounter the strong electrical field.

But some researchers are concerned about whether the barrier can withstand the movement of barges through the river.

Marc Gaden, communications director and legislative liaison for the Great Lakes Fishery Commission in Ann Arbor, Mich., said Chicago is one of three potential entry points for Asian carp into the Great Lakes. The others are  Lake Ohio near Cleveland and Eagle Marsh near Fort Wayne, Indiana, he said.

Gaden said the Chicago entry point poses “the biggest risk. … If they got into Lake Michigan they could swim their way around or larvae could be transported in a ballast tank.”

But Chuck Shay, Chicago district project manager for the U.S. Army Corp of Engineers, who focuses on the electrical barrier, said there have been no problems with it so far.

“Some work has been done with fish getting caught up in the immediate vicinity of the barrier and then pulled across, but it hasn’t been quantified yet,” he said.

Instead, the U.S. Army Corp of Engineers tests the effectiveness of the barriers by tagging fish near the barriers and monitoring their journey along the river.

“We capture fish, not Asian carp. We don’t [introduce Asian carp], but other fish that are in the canal and surgically implant tags that give off telemetry signals like a radio signal so we can track individual fish and receivers up and down the waterway,” Shay said. “We monitor what these tags do at the barriers and we’ve never observed a tagged fish swimming through an electrical field.” 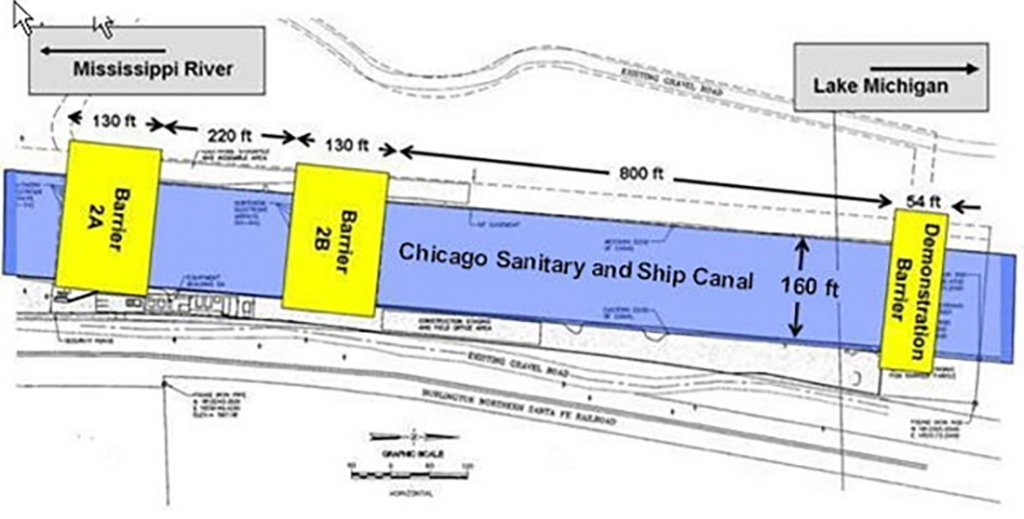 Model of the electric barrier to keep Asian carp out of Lake Michigan. (Courtesy/U.S. Army Corp of Engineers Chicago)

He said these tests are ongoing, but it’s “important to note that we have never collected or captured Asian carp at these barriers to our knowledge. We don’t believe there are any Asian carp on a regular basis challenging barriers.”

Sam Finney, fish biologist at the Midwest Regional Office of the  U.S. Fish and Wildlife Service in Downstate Carterville, agreed.

“They’re not pushing up against the barrier all the time,” he said, “That’s a misconception.”

Direct current is pulsed through the water. As fish swim in the river they encounter the electrical field and are repelled. “Electricity in water works better on bigger fish,” Finney said.

“Small fish some about two inches can swim through, not all but some,” Finney said. “There are also some concerns with barges going through the barrier and warping it.”

With these concerns in mind, other types of “barriers” are being researched including a carbon dioxide barrier and another location for an electrical barrier at Brandon Road Lock and Dam in Joliet, as a backup to the electrical barrier in the Chicago River.

“If they were stopped at Brandon, there would be no access to other pathways,” Finney said.

An electrical barrier keeps Asian carp out of the Chicago river. (Danielle Prieur/MEDILL)