By Sarah Very and Sony Kassam

Little did they know they would become best friends and business partners – founding their own Bohemian restaurant and taking its annual revenue to $2.6 million in under two years.

Embellished with brightly colored tiles and European-inspired decor, River North’s Bohemian House earned a Michelin Bib Gourmand within just a year of opening. With an average of 175 customers per day on weekdays, and 250 per day on weekends, Boho has created a name for itself in Chicago’s food scene.

“Despite the infinite brunching places in Chicago, [Boho] is unlike anything I’ve ever had as a brunch option,” said M.J. Price, an Uptown resident who visited Boho for the first time on Sunday afternoon. She ordered the skirt steak and eggs ($18), and said she appreciated the price and “uniqueness” of her meal, as well as the restaurant’s atmosphere.

A look inside Bohemian House. (Sarah Very and Sony Kassam/MEDILL)

Powell, co-founder of Bohemian House, started out in medical device sales, working for Stryker for five years and then breaking off in 2011 to start his own medical device distributorship. His partner, Chwajol, is a practicing neurosurgeon at Presence Neuroscience Institute in Joliet, Illinois.

The two shared an interest in the hospitality industry and spent countless nights reading zoning laws and researching restaurant trends. They brought on a third operating partner and general manager, Dan McCormick, 41, who had opened restaurants in the past and could offer what Powell said was “instrumental guidance.”

“The way the project came together was awesome,” Powell said.  “We could have never predicted it.”

“The way the project came together was awesome. We could have never predicted it.” – Dan Powell, partner at Bohemian House

Powell said the restaurant’s revenue cycled with the seasons during its first year. He explained that Midwest weather is a huge factor in swaying people’s willingness to eat out.

“Any restaurant will tell you there’s a spike in seasons,” Powell said. “We opened in July, so it was a hot new place, it was brand new, and it was our first year. It just had a lot of buzz. Then the winter hit and our sales dipped down. . . February and March were really slow for us last year.”

Powell added that launching brunch last summer and lunch last fall helped spike the restaurant’s sales, and now Bohemian House is “back to full throttle” with a strong top line of $320,000 last month and 45 employees on staff. Powell projects 5 percent to 7 percent revenue growth this year.

To attract customers before its opening, Bohemian House released teaser videos that were filmed in Powell’s apartment — its brick walls resembling those inside the restaurant. The team also hung “Coming Soon Boho” banners in the restaurant’s windows. To get the word out, Powell and his partners hired public relations firm Henson Consulting, which specializes in consumer packaged goods, hospitality and restaurants.

The partners had originally hired a celebrity chef from the Czech Republic who was “essentially their Wolfgang Puck.” Seven months after opening, however, the chef decided to return home.

“That was probably the most stressful part of the process, but thank God because we found Jimmy,” Powell said. “We found him on Craigslist, and when we met with him, we liked his personality right away and what he was doing in the kitchen. So he became our chef. We didn’t know it at the time, but it was exactly what we needed.”

Papadopoulos’s very first job had been washing dishes at a mom and pop pizza shop at age 15. Then he cooked pizzas and burgers, moved on to work the seafood counter at Whole Foods full time, and eventually dropped out of high school.

“I didn’t know what I was going to do for myself or for my life,” Papadopoulos said. “I really had no direction at that point.”

In 2004, Papadopoulos met a chef who inspired him to enroll at Le Cordon Bleu College of Culinary Arts in Chicago. After graduation he held jobs at Marriott and Renaissance hotels. Papadopoulos worked at Sam and Harry’s Steakhouse in the Renaissance as a sous chef for two years and chef de cuisine for four.

“It was a different vibe, completely,” Papadopoulos said in reference to his previous jobs. “I was looking forward to doing something very passion driven. I met the developers of Bohemian House, and we kind of just hit it off. I feel like it was a really good opportunity to do something I was passionate about.”

For Boho’s dishes, Papadopoulos draws on the cuisine of central European countries such as Hungary, Czech Republic and Germany.

Boho’s small plates range from $8 to $15, while entrees are $19 to $31. The partners brought in a beverage director, Danny Batista, to create $10 to $13 cocktails and curate a beer menu for the restaurant.

The signature dish, Chicken Paprikash, goes for $27 and “keeps the lights on,” said chef Papadopoulos. It’s made with family- farm, antibiotic-free chicken. He explained that the fresh ingredients Boho uses drive consumer prices higher – a commodity- raised pig could cost $1.85, while a well-raised hog would cost more. Bohemian House also makes some of its food items in-house, such as pickles, sausages and mustard. 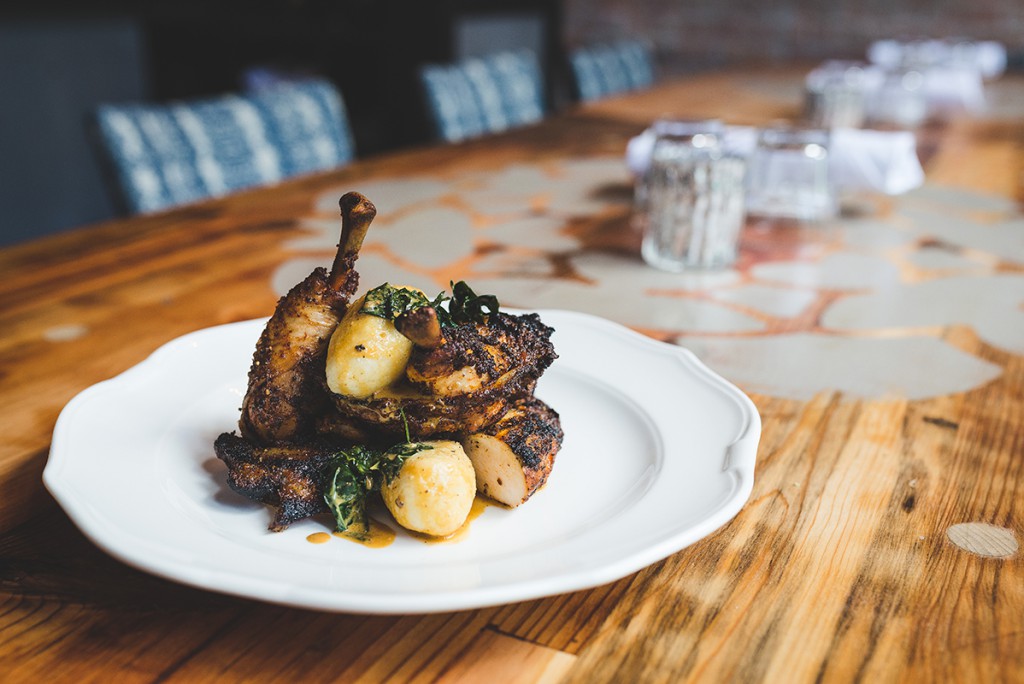 The grilled chicken paprikash is a customer favorite at Boho. (Source: Anthony Barlich)

“When you buy products like what we buy here at Boho, it’s exponentially more expensive than culinary commodity,” the chef said. “It’s hard to equate value to your guests, but you just hope they get it and that it resonates with them – that sustainability is something they want to support. They want to support things with more purpose and ethics behind it instead of just financial gains and making money.”

While brunching at Bohemian House on Sunday, first-time guests admired the atmosphere and service.

“It was a quiet space, and we were able to hold a conversation without having to shout,” said Anne Lyons, a resident of Chicago’s south suburbs. She ordered the omelette ($13), and said it had “a lot of fresh ingredients.”

One of the reasons customers appreciate Boho is the restaurant’s peaceful and friendly atmosphere. (Sony Kassam/MEDILL)

Her relative Amanda Lyons, a local from Printers Row, said the service was excellent. “I had a preconceived notion that we would feel rushed, and we were not. We could eat brunch at our leisure and just hang out.”

“It was so cute inside,” said Hitchens, a Gold Coast resident. “We walked in and we were both like ‘oh my gosh, why have we never been here?’”

Tozzini, from Streeterville, agreed. “We want to come back at night for cocktails,” she laughed.

Through its development as a business, Bohemian House underwent changes based on strategies that worked and some that failed. For example, the operating team had to make changes in the way they trained their staff for the new brunch and lunch hours.

Last year the team wanted to offer a new late-night option for the River North community. Powell said they tried to push the image of a “living room” section of the dining space, with its blue leather couches, cushiony big back chairs and coffee tables, as a way to lure people in to grab a quick cocktail after dinner. 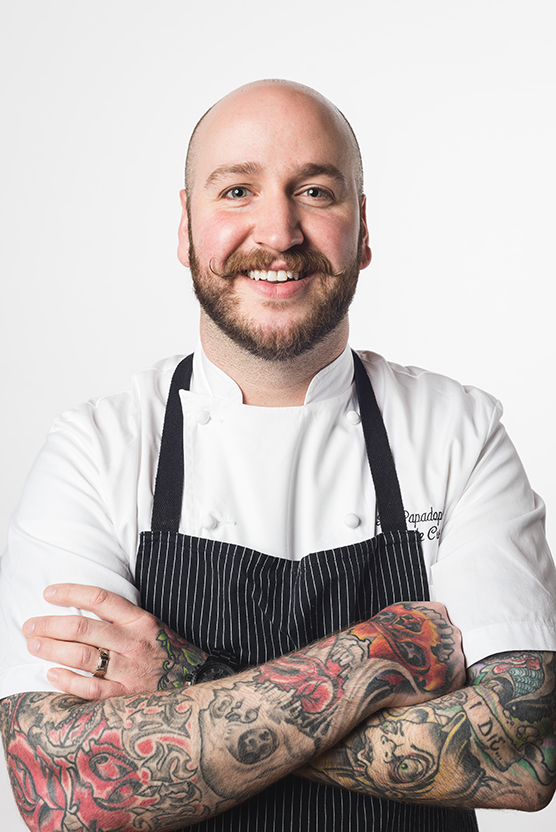 “When you have ‘house’ in the name of your establishment, it really better feel warm and homey.” – Jimmy Papadopoulos, executive chef at Bohemian House
Photo: Anthony Barlich

“But we learned quickly that it was costing more to run that, with the hours for the employees and not bringing in enough income,” Powell said. “So we’re going to try to revisit that later down the road.”

Powell said Bohemian House does not have a “true competitor” based on type of cuisine, but remarked that Chicago’s overall restaurant scene is “fiercely competitive.”

“Chicago has the same amount of Michelin restaurants per capita as New York City,” Powell said. “The James Beard awards are here. They’re going to be here for another two years. I think the nation’s kind of seeing us as this new capital of food in the U.S., so competition is extremely high. Restaurants all over River North are fighting for customers. . .  For the better, I think it pushes everyone to be better.”

Boho differentiates itself from its competitors by focusing on the Bohemian brand and creating a place of warmth and community.

“What makes Bohemian House a special restaurant is there’s a great level of connection and culture and people feel it when they come in to the restaurant,” Papadopoulos said. “You feel it with the food and you feel it with the ambience and the thought that went in with the design. When you have ‘house’ in the name of your establishment, it really better feel warm and homey.”