By Sony Kassam and Sarah Very

Three University of Chicago graduates want to change the way people think about health in the workplace.

Frustrated by the lack of affordable and accessible workplace fitness options during their summer internships and post-graduate jobs, Arnav Dalmia, Shivani Jain and Ryota Sekine decided to take matters into their own hands.

“[Our jobs] had involved sitting for six to eight hours a day, and it was affecting our health,” said Sekine, now the chief operating officer at newly-formed Fitness Cubed Inc. “We started looking at solutions. There were standing desks and treadmill desks, but they cost upwards of $1,000 to $2,000. Right out of college, we didn’t have the salary to afford those things. That’s when we thought we had to create something.”

In 2012, the three friends developed an idea for Cubii, the “first- ever” smart under-the-desk elliptical machine.

“Discovering the Cubii has really changed my life at work,” said Michelle Langley Laubach from Arlington, Virginia. She works in healthcare management and bought a Cubii to use at the office, while her husband bought one to use at home.

“I have really seen benefits,” she said. “I didn’t ever go into it thinking of [Cubii] as a replacement for exercise or my workout… I think of this as like a supplement to it… it gives me that feeling of constantly being in motion instead of locked at my desk. It’s been phenomenal. The biggest surprise I’ve had is that I’ve had to crank down my resistance because it really can be a workout.”

“Thank God,” said Jain, chief marketing officer of the company, “because we needed even more money after that.”

According to Jain, Fitness Cubed then raised $450,000 from angel investors in a seed round of funding in April 2015.

Between launching with Kickstarter and starting to ship in December 2015, the company saw $160,000 in revenue from 500 pre-orders sold through its website. “This was all due to organic traffic since we weren’t focussing on actively marketing during that period,” Jain added.

Since hitting the market Dec. 1, Cubii has made a break into office spaces and homes around the world, selling approximately 2,600 units in the United States, Canada and Europe. Its top line jumped from $30,000 in December to $90,000 in January and $120,000 in February.

The company now predicts 5 percent to 10 percent growth month-over-month, which would total $1.5 million in sales by year-end.

Designed and developed at a Chicago design company and manufactured in Asia, Cubii is currently retailing at $347. It comes in two colors: chrome (silver) and noir (black).

Jain said the focus of the company is to find more ways to seamlessly integrate exercise into people’s lives.

“We’ve realized this pain point doesn’t exist just in the office,” she said. “Lots of people are buying Cubii. They’re using it while watching TV, they’re buying it for their older parents who are using it while knitting…and a bunch of other things that we couldn’t imagine because we didn’t market it like that. People are buying it for their kids who have ADHD or for schools.”

Cubii also has a mobile app, which allows users to track and share their progress as well as compete with friends and colleagues. The Fitness Cubed team is in the process of integrating Cubii with fitness trackers.

“When we started out, there was this huge movement toward connected health and fitness,” Jain said. “Everyone was tracking their fitness. Our vision is going over and beyond that — it’s providing an actual way to improve your health through exercise while still allowing you to stay connected in the fitness ecosystem.” 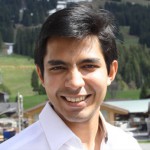 The idea first came to Arnav Dalmia, Fitness Cubed’s chief executive officer, in 2012 while he was at a summer internship during his undergraduate studies. He brought Sekine and Jain on board, and the three used the University of Chicago Booth School of Business’s New Venture Challenge to garner support for their idea. The team placed second in the challenge, securing $15,000 and the chance to create their first prototype.

“Our initial prototype was this 3-D printed model that doesn’t even move,” Jain said. “We still have it.”

Still, it took some time after graduation before the trio decided to quit their corporate jobs and pursue Cubii full time. Dalmia held a corporate job at Sears Holdings Inc. Sekine, who studied biology, also worked at Sears for about a year. Today, he manages operations logistics and product development for Fitness Cubed.

Meanwhile, with an economics degree under her belt, Jain secured a fellowship with the Cook County chief financial officer. Now she manages the marketing, sales and customer relations for Fitness Cubed.

“We were moonlighting for a year, just working on regular jobs,” Jain said. “Then we were getting so many people telling us, ‘You should do this,’ and we decided it’s time to validate it.” 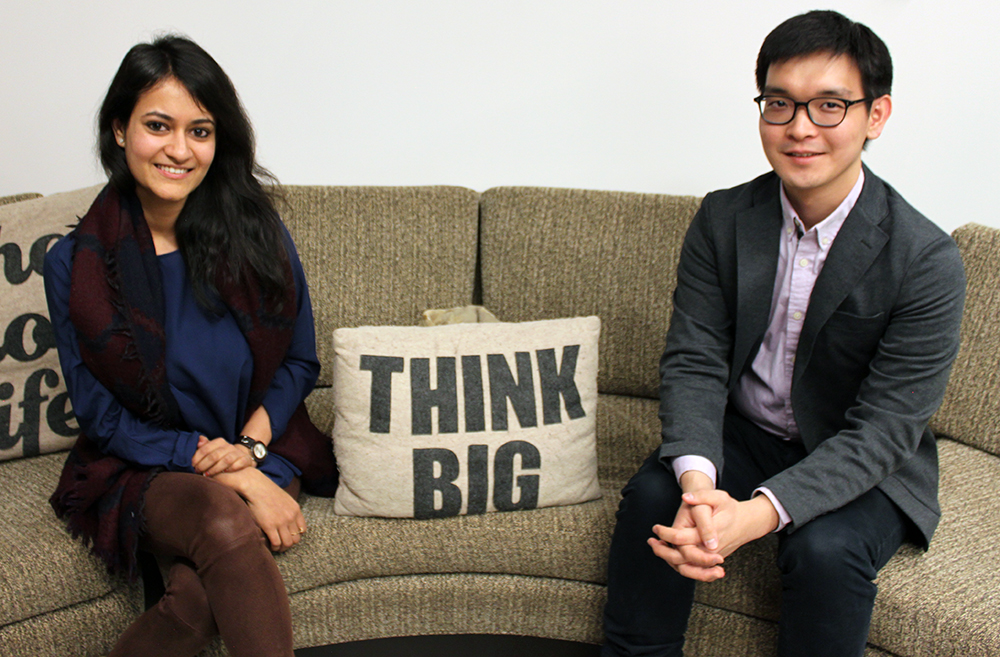 After working at major enterprises for a time, Jain and Sekine followed their passion for health and committed to Cubii full time. (Sarah Very/MEDILL)

Furthermore, the company has three advisors who “guided us and helped us along the way. We gave a little bit of equity to them, thanking them for all their time and the value they bring to the company,” Jain said. “We make them formally part of our company.” Fitness Cubed compensates employees “with a bonus-based structure… It always helps to have the motivations aligned.”

Fitness Cubed recently hired an in-house digital marketer. According to the founders, the company’s market strategy consists mainly of ad targeting, Facebook advertisements, adwords and retargeting. The team plans to bring on at least two more employees this year: one as a customer service representative, and one as a technology lead.

Fitness Cubed also works with several global partners — a tech team in India that manages the Cubii mobile app, logistics partners in Europe, and a domestic partner in Los Angeles. These logistic partners “help with the last mile of fulfillment” for all customers in the United States and the European Union.

Additionally, the company has a customer service representative in the Philippines and a partner in Asia who manages the manufacturing of Cubii. They work with product assembly and a freight forwarding company to transfer shipments to Fitness Cubed’s logistic partners.

The company’s main competitors are standing desks and treadmill desks. Although the products’ value points are essentially the same, Jain said Cubii is “more accessible and is something that has less layers and hurdles to get into your workplace… It’s ergonomic and becomes almost an unconscious motion.” Cubii’s sleek design and quietness are intended to blend in with the a user’s office or home space.

Laubach, the early adopter in Virginia, works at a research institute with treadmill desks for employees to use. But they “were more of a pounding on my knees and my lower back,” she said. After reading an article about Cubii in 2014, Laubach remembers thinking, ‘That’s fantastic, my knees aren’t going to hit the bottom of my desk or the top of my desk. I can sit there and not have to worry about my lower back.'”

Jain said fitness trackers are not competitors for Fitness Cubed because Cubii is a smart device that can plug into these trackers and allow customers to track their fitness goals. “It’s a connected industry,” Jain said. “The reality is that people lose motivation and they need to set goals. We can use this tracking technology to keep them challenged.”

Striving to differentiate itself from its competitors, the company needed time to finalize the product vision — about 15 to 17 iterations, according to Jain.

“We were not engineers, we were not designers, we had no formal background in anything remotely related to this. So it was pretty overwhelming to think where to start,” Jain said.

At first, the founders considered developing Cubii with the capability to generate energy from pedaling.

“Unfortunately, that didn’t happen because we realized the costs were higher than expected,” Jain said. “Generators were also noisy, and the angles, weight and height of Cubii had to be adjusted based on initial user feedback.”

In the future, Fitness Cubed hopes to expand shipment to countries in Asia where it sees demand, such as Thailand, Japan and Singapore. The company also plans to further evolve Cubii’s technology and the app by customizing them for different markets.

“We’re hoping to release version two in the next few months,” Sekine said. “That would incorporate advanced features, for example, being able to remotely control everything about the Cubii, like resistance and upgrades.”

Photo at top: Cubii is a smart under-the-desk elliptical designed to bring fitness into offices and homes. (Sarah Very/MEDILL)