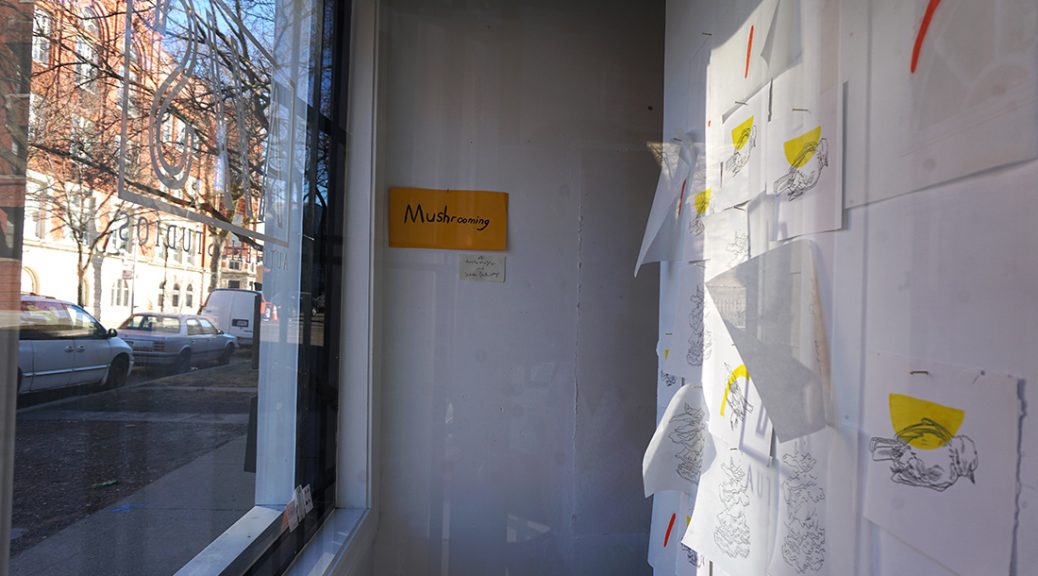 On the corner of Cortland and Richmond in Logan Square sits an unassuming house. This is the new home of The Overlook Place, a studio and residency program dedicated to giving women artists, queer artists, and artists of color a space to create and be heard.

Jennifer Fagan, Overlook’s founder, explained how the art world’s hierarchical culture motivated her to found her own art space.

“There’s women’s art, queer art, there’s black art, and then there’s the art that gets shown, which is not any of that,” Fagan said. “I wanted to create spaces for all this art but not have it pigeonholed as ‘this’ art.”

According to the National Museum of Women in the Arts, over half of visual artists in America today are women, though only 30 percent of works in commercial galleries are made by women. As of 2017, Fagan has managed five residencies with seven artists, hosting shows, events, and recently, a film screening. She also held a feminist conversation the day after the 2016 election. Since then, Fagan said, politics have become an ever-present part of the art community.

“In November, the whole room was daunted by four years – a possible eight years – of this,” Fagan recalled. Her work before the election, she said, had been feminist but not necessarily political. “It’s our responsibility [to] hold each other up and say look at these intelligent ways we can talk about serious things and our anger and our fear and give voices to that.”

“Right now I have no interest in anything that’s not political, art-wise,” Shavers said. “It’s very overwhelming at times, but you have to just keep on making things and doing things…Art for me is trying to start a conversation, trying to bring a problem to light and understand it.”

Shavers’ own activist art has been the source of controversy before; a piece on the sexuality of black women was ripped off its display wall a few months ago.

“I’ve had my work thrown in the trash before when I was in art school,” Shavers added. “It’s an experience; it’s a reaction. I think that’s the most important thing: I want a reaction…Some people might not understand the work, but I’m not super concerned by that. If they think about it later, and if something clicks six months from now, that’s perfectly fine by me.”

Chicago is home to over 200 theaters and art galleries and an estimated 63,000 artists. According to Fagan and Shavers, Chicago artists are consistently concerned with bridging divides, reaching across neighborhood lines and political ones.

“Giving light and a platform to artists that are doing amazing things politically and talking to each other has been really important,” Fagan said. “I’ve been wondering, too, how can we make art or art events or art spaces that’s not just echoing our own community? That’s what’s really hard. Everyone at the feminist film fest knows what we’re talking about. But how can I show that to a group of Republicans, maybe, and have it simmer?”

Fagan said her artists until now have all been women, but she hopes to bring other voices into the Overlook too.

“I think that voices should be heard from men,” Fagan said. “I’m thinking of doing a panel of feminist men…because that’s something that’s lacking. Even from our feminist conversation in November about Trump, where were the men?”

A Washington Post poll after the January women’s march reported 40 percent of Democratic women plan to be more involved in politics, compared to 25 percent of all adults polled.

Stephen Duncombe, a professor of media and politics at New York University, wrote in a 2016 essay that modern protest was akin to performance. “Activists [during the Civil Rights Movement] understood that reality needs to be staged in order to be widely seen, and protest must be made into an emotionally charged spectacle for injustice to be felt.”

Staging the spectacle of injustice is what brought actor-activist Jazmín Corona to Collaboraction for their current production, ‘Gender Breakdown.’ The show features 10 female-identified actors and calls out gender disparity in the theater scene while addressing issues of education and body image, the community and moving forward.

“As an actor, I have the privilege of telling a story in front of an audience for a certain amount of time,” Corona said. “That’s an opportunity that I don’t want to ever waste…This is the chance that I have to affect whatever change I can. I can go to protests, I can write to my senators, I can do all of that, but as an individual, this is what I have inside of me that I can share.”

Gender Breakdown is featured at the Flat Iron Arts Building through March 19. For more information on The Overlook and future events and exhibits, visit theoverlookplace.com.