Asian American organizations have stepped up their efforts to ensure that tomorrow’s Illinois primary runs smoothly for voters, especially those with language limitations.

Asian Americans Advancing Justice—Chicago  trained poll watchers Saturday both to ensure full voting rights for the Asian-American community and to hold the Chicago Board of Elections accountable by providing feedback for any problems and complaints on election day.

“Our primary goal as poll watchers is to ensure that Asian-American voters receive the language assistance they are provided by the law, and that civil and voting rights are respected,” said Joseph Jerr, 29, who has been a poll watcher for the Asian-American community in Chicago since 2012 and an instructor at the training session. “We also act as watchdogs for the Board of Elections, and keep them accountable. By taking notes and recording everything, we can use the information collected to advocate for change in the election system.”

Jerr added, “In doing this, we hope that the Board of Elections shows compliance with how the system is supposed to work.”

Poll watchers are unpaid volunteers who have to be certified by the organization they represent, and are limited to one per organization or two per candidate at each voting location. One of their responsibilities is to record issues and complaints that arise at the polling places to present to the Board of Elections, and ensure that judges are held responsible for their actions.

“In the past there have been issues and complaints that weren’t recorded,” said Andy Kang, legal director for AAAJC. “We’re asking our poll watchers to write down everything now in order to have something substantial to present to the Board of Elections, so that they can reform or change whatever these issues are in advance of the [November] presidential elections.”

During this past week’s early voting, Chinatown had a multitude of problems that were forwarded to the Board of Elections. AAAJC hopes that by sending out more trained poll watchers they can help inform voters about their rights and deter election judges from failing to carry out their duties.

During the almost two-hour-long training, the instructors explained the importance of securing and informing the fast-growing Asian-American population in Chicago about their voting rights, the key Sections 203 and 208 of the Voting Rights Act, before taking the poll watching trainees through a series of role playing scenarios. The  scenarios were designed to show the trainees some of the problems they can expect to see on voting day, such as a judge not offering a Limited English Proficiency voter paper ballots in that voter’s native language, or insisting that voters could not bring their chosen form of assistance. 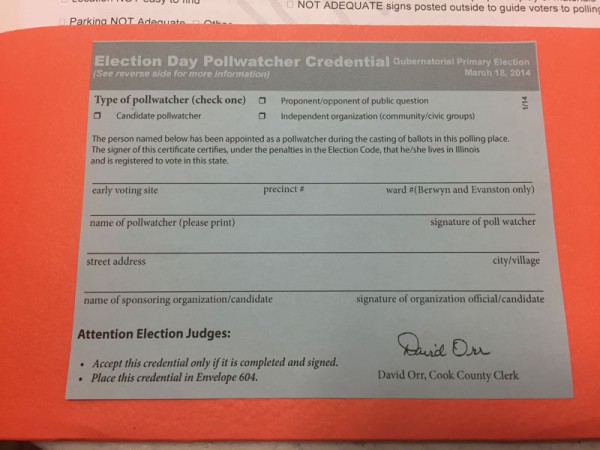 A picture of the poll watching credentials. All poll watchers must have this in order to be at the site.(Colin Mo/MEDILL)

“I feel pretty prepared,” said Kim Nguyen after the training session, as she picked up her poll watching credentials. “This is something that appeals to me as my duty as a good citizen.”