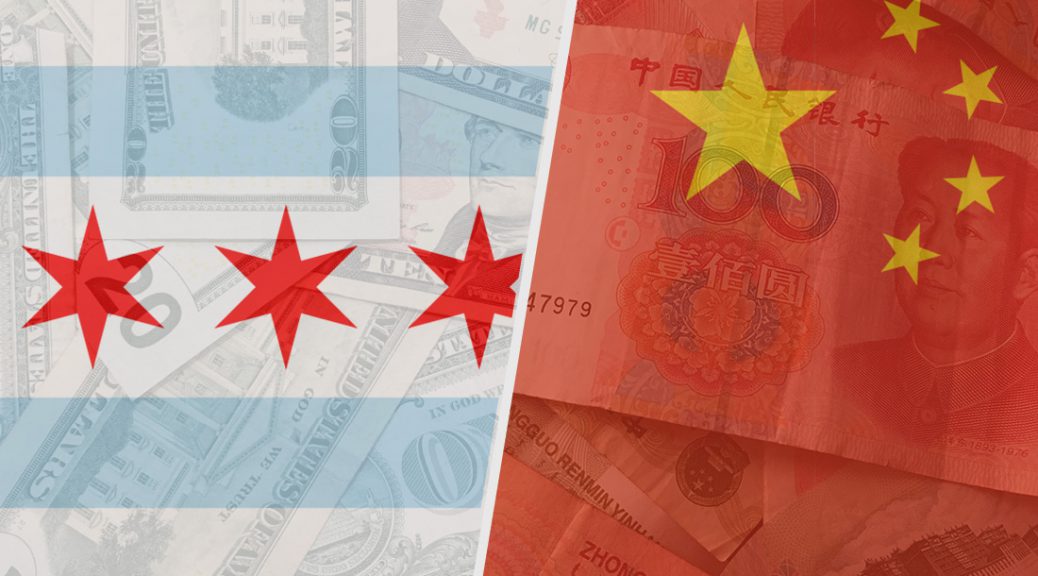 First it was Japan. Now China.

The investment capital that China, Chicago’s shiny new investment star, injects into the local economy has reached new highs almost every year since the Great Recession.

Chinese investment in Illinois — primarily concentrated in the greater Chicago area — hit a whopping $5.5 billion last year, more than 350 times the $15 million invested in 2009, according to the Rhodium Group, a New York-based research firm tracking Chinese investment in the United States.

Since 2000, Chinese interests have invested $9.4 billion in the state, making Illinois the largest recipient of China’s outbound investment after California and New York. The investment boom took off after Mayor Rahm Emanuel signed a Gateway Cities Agreement with eight Chinese cities in 2013, becoming an important U.S. gateway point for Chinese investment and tourism.

“We determined that a strong effort on China and working on a greater Chinese investment environment would be in our interest, and we’ve been proven correct,” said Andrew Spinelli, director of global strategic initiatives at World Business Chicago, in a phone interview. “Since signing that gateway cities agreement, we’ve seen record-breaking investment every single year in Chicago.”

It is a marriage driven by political willingness that  reflects the cash flush Chinese firms’ ambitions for global expansion, desires for technology innovation and local governments’ increasing appetite for foreign capital.

Yet it seems Chicago’s darling investor is facing a somewhat hazy future in the Trump era. All the efforts Chicago has made to woo Chinese corporations, along with the resulting economic, cultural and academic benefits both sides have enjoyed, might be curbed by growing inward-looking policies.

In the U.S., that’s taking the form of greater scrutiny by President Donald Trump’s administration, while in China, officials have put stricter rules in place to discourage the outflow of capital.

Chicago hosts more than 80 Chinese firms, 72 percent of all Chinese facilities across the state. These companies together have created more than 2,110 jobs, according to a Rhodium study published in 2016.

Up until 2013, the most heavily invested sectors by Chinese corporations were transportation, infrastructure and automotive components manufacturing. Since then, Chinese companies have poured substantial capital into Chicago’s real estate and information technology sectors, now the two leading industries receiving Chinese money.

Traditionally, Chicago was not a particularly popular destination for Chinese investment, compared with the East and West Coasts, but the Second City’s hub location and connectivity have in recent years won the hearts of Chinese investors, partly thanks to the city’s aggressive efforts to snag Chinese capital under Mayor Emanuel, Spinelli said.

“When you add the route, it’s not just a route,” said Pubin Liang, general manager of Hainan Airlines’ North America operation, in an interview. “We are going market the route. Our clients that usually fly with Hainan Airlines are going to fly to Chicago, because we have the new flight.”

Besides location, Chicago’s robust technology innovation scene is attractive as Beijing seeks to shift its economy toward technology, services and greater consumer spending, Damien Ma, a fellow at the Paulson Institute, a Chicago-based think tank focusing on U.S.-China relations, said in a phone interview.

Chicago also serves as a lucrative market for property investment, a strong rival to San Francisco and New York City because of its relative affordability, Ma said.

“You get a lot more bang for your buck here,” Ma said.

Illinois is home to Wanxiang America Corp., the American arm of a Chinese conglomerate that provides automotive parts for one of every two cars manufactured in U.S., according to the company. It was among the few Chinese investors that tested the waters in the U.S. market as early as 1994 and has thrived in the Midwest since.

Headquartered in Elgin, Wanxiang has many installments across the country manufacturing automotive parts. The company says it has hired at least 10,000 locals. Its investment — totaling more than $10 billion over the years — has extended significantly to real estate, renewable energy and venture capital sectors, said Pin Ni, the company’s president, in a phone interview.

Ni takes pride in the fact that Wanxiang is a company with an American identity, not a Chinese one. He acknowledges that the firm makes better money in the U.S. — with $3.5 billion of annual revenue —  than in its home country, because he says running a business is simply easier in the U.S.

The secret? Play by the rules; be transparent; know your strengths, Ni said.

Ni, who chairs the Chicago chapter of the China General Chamber of Commerce, said bluntly that while Chinese investors are a lot more comfortable with investing in the other half of the globe today, his fellow countrymen have a long way to go to truly integrate into the U.S. business world. The problem, he said, is a Chinese mindset that might take generations to change.

“You need to respect the rules here,” he said. “You cannot try to get a shortcut. In China it works very well. In fact if you don’t get a shortcut, you are going to be behind everybody else.”

Experts said investment is much more complex than one would think, definitely trickier than trade, because of the issue of cultural integration.

“You have employees come from different cultural backgrounds,” Liang said. “We have to figure out what the best practice is to make sure that we have the talented people work together.”

The Chinese capital expansion in Chicago is largely in line with national trends.

Chinese companies invested a record $45.6 billion in the U.S. economy in 2016, a tenfold increase from just six years ago, the Rhodium Group reported. Last year’s record drove the cumulative Chinese investment in the U.S. since 2000 to $109.5 billion.

Chinese capital started flowing into the U.S. market in large volume after the U.S. financial crisis. After a decade of rapid economic growth in the 2000s, primarily driven by exports, China found itself sitting on a huge pile of foreign exchange reserves, which peaked at around $4 trillion in 2014, Ma said.

At this stage, outbound investment was no longer a state-led affair. More private investors sought to expand markets, as the investment targets started morphing into services, consumers, technology and manufacturing, Ma said.

An overwhelming 93 percent of the Chinese investment in Illinois since 2000 came from private firms, higher than the 71 percent national average, according to the Rhodium Group.

Future in the Trump era

The growing presence of Chinese capital in the U.S. has triggered alarm bells in Washington, including the deal between the long-struggling Chicago Stock Exchange and its buyer, China’s Chongqing Casin Enterprise Group.

The Committee on Foreign Investment in the U.S. cleared the deal at the end of 2016, but it awaits approval from the Securities and Exchange Commission and faces opposition from some Republican lawmakers in Congress.

U.S. business ties with China have come under more scrutiny after then-candidate Trump labeled China a “currency manipulator” and threatened to slap tariffs on Chinese imports.

Adolfo Laurenti, global economist at Bank J. Safra Sarasin Ltd. in Switzerland, said in a lecture that the current administration’s attitude toward China is “problematic.” He said he worries that new rules might make Chinese investing in the U.S. more difficult, which ultimately would hurt the global economy.

“On the one side, I think it would be very unfortunate for American innovation, not to have access to Chinese capital market and Chinese investors,” Laurenti said. “And on the other side, the Chinese will be clearly worse off if they cannot acquire the technology as they have done. I’m worried more that if we lose this mechanism or transmission of knowledge globally, we would once again be all worse off than we have been so far.”

Dali Yang, a political scientist at the University of Chicago, said in a phone interview that while local governments, including Chicago, have been welcoming to Chinese investment, in the long run, it might be more challenging for businesses to conduct large-size deals with U.S. governmental entities under a protectionist framework.

“I think at this point certainly companies would want to take a wait-and-see attitude if they are contemplating various sizes for deals,” Yang said.

What Xi’s speech did not address is the central government’s concerns over the flow of capital out of China as investors seek greener pastures. The outflows have pressured the Chinese currency, the yuan, lower — something the Chinese government has tried to stop by putting restrictions on capital flight.

“They are obviously very concerned about the volatilities of capital leaving the country, so that could potentially constrain some outbound investment, although I think it’s primarily going to affect the major state-owned enterprises rather than the private investors,” Ma said, “So that could have a somewhat modest impact in the near term.”

Ma said it is unclear whether Trump’s inward-looking policies would affect Chinese investment in the U.S., given the unpredictable factors that might impact U.S.-China relations. But he said that as long as China maintains an average of 5 percent to 6 percent economic growth annually, Chinese corporations’ desire to invest abroad will continue.

“It just depends on the mix of companies,” Ma said. “It depends on certain regulations with [Chicago], tax incentives. There is a lot of things that the city can do if they want to continue to attract foreign investment.”

Spinelli said the city will remain committed to strengthening the partnership with China,  while on the lookout for the Trump administration’s actions.

“China has been such a major player in Chicago, and we intend for it to continue to be,” he said.

Ni, the U.S.-based Chinese businessman, answered cautiously but with a touch of  pragmatic business philosophy.

“Policies will always affect us, but you just deal with it,” he said.