Consumer Price Index growth slowed to 0.2 percent in February from 0.5 percent in the prior month, the U.S. Bureau of Labor Statistics reported, stirring divergent anticipations of the likely timing of the Federal Reserve’s next move to curb inflation. The February bump was in line with the Wall Street consensus forecast.

The index increase was held back by a sharp price decline in the energy sector, with the adjusted gasoline index plummeting 0.9 percent after jumping 5.7 percent in January, and the fuel oil index falling 3.6 percent after a 9.5-percent hike a month earlier.

Excluding food and energy, the index for all items grew 0.2 percent, following a 0.3-percent rise the prior month, driven by price increases of shelter, apparel and motor vehicle insurance, the BLS stated.

Andrew Opdyke, economic researcher at First Trust Advisors L.P., said in an interview that the results would give the Federal Open Market Committee “the green light to go ahead and raise rates” when it meets March 20 and 21.

“There’s been a pickup in the rate of inflation,” Opdyke said. “If you compare over the past three months and six months annualized rate, consumer prices are up 3.6 percent compared to 2.2 percent in the last year, and all of those numbers are a bit above the Fed’s 2 percent inflation target.”

Michael Hicks, economics professor at Ball State University, agreed that the Fed might now be more concerned about inflation.

“If you just look at last month, it’s increasing at about 2.4 annual rate, so that’s a little bit faster than I think economists expected,” Hicks said in an interview. “Over the past year it’s been faster than in previous years.”

However, Richard Moody, chief economist at Regions Financial Corp., questioned the impact of the February CPI results on the Fed’s intentions.
“There is nothing in the inflation data that suggests the FOMC needs to move at a faster pace,” Moody wrote in an email.

Similarly, Roberto Duncan, economics associate professor at Ohio University, said in an email that the latest CPI wouldn’t swing the Fed towards a tighter brake on price rises, but might provide “an additional reason to postpone the rise in rate but only for a short period.”

The BLS index of motor vehicle insurance prices continued to jump since December, hiking 1.7 percent in February, while the index for new vehicles fell 0.5 percent, the largest monthly drop since August 2009. 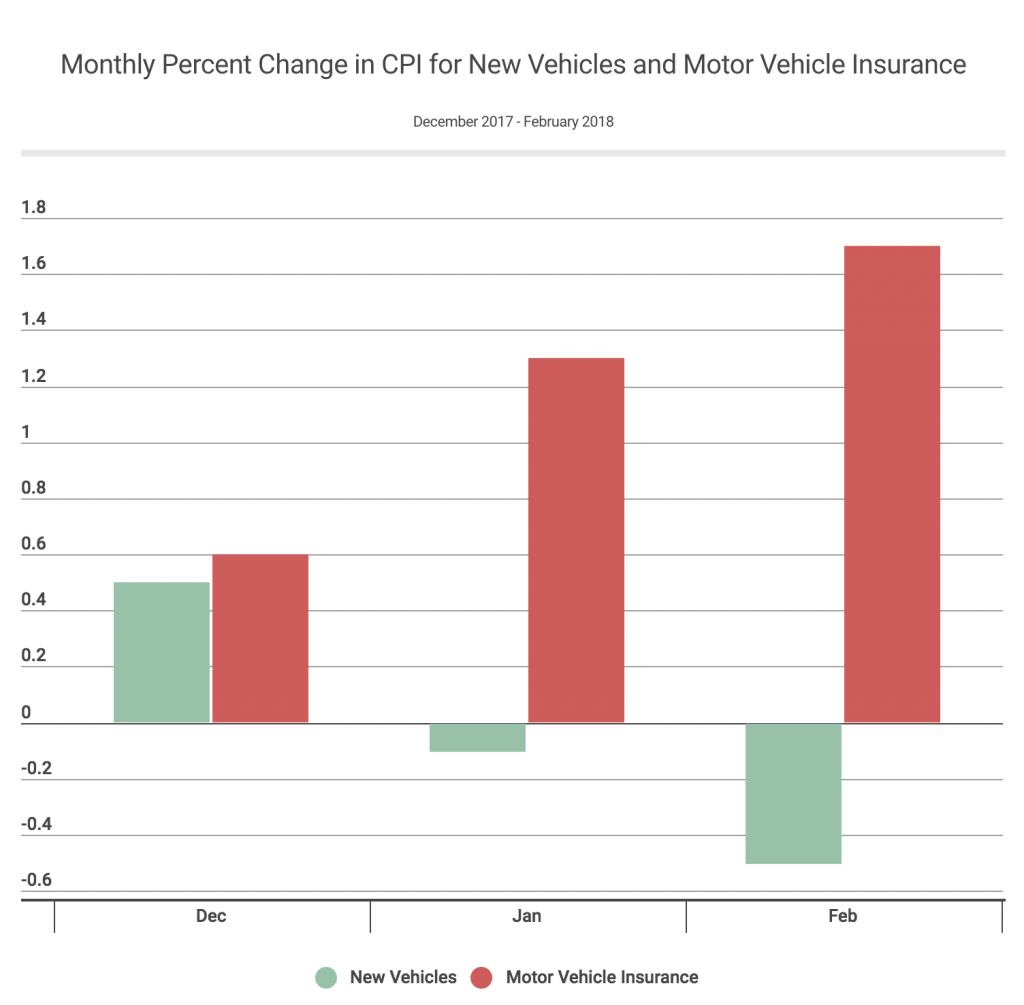 “You have insurance going up faster than the price of new cars going down,” Giacomo Santangelo, economics professor at Fordham University, said in an interview. “You don’t have anything to offset that.”

“We may want to see that people are going to continue to buy new cars,” Santangelo said. “If people are buying used cars, that’s good I guess, but that doesn’t help companies like General Motors and Ford.”

Over the past year ended in February, the all items index grew 2.2 percent before seasonal adjustment, slightly beating the 2.1-percent rise for the 12 months ended in January. Excluding food and energy, the total index climbed 1.8 percent on a year-over-year basis, with a 7.7-percent jump in the energy index and a 1.4-percent rise in the food index.

Interest rate increase expectations have influenced the stock market recently, and on Tuesday and S&P 500 Stock Index closed modestly lower at 2765.31, down 0.64 percent.