Many people were genuinely impressed with the ad on twitter with reactions ranging from being completely floored by its content, to supporting NO MORE in the effort to publicize the issue of domestic violence.

That 911 commercial was by far the most powerful ad I’ve ever seen— Ashley (@Ashleyv_wells) February 2, 2015

Experts such as Margaret Duval, executive director of the Chicago-based Domestic Violence Legal Clinic, also voiced their support for the ad.

“I like this one a lot,” Duval said. “The panning through the house and some of the details ring very true to the experiences of our clients. The wall being punched is something that we see over and over again. The sense of being trapped. The sense of being held in captivity, being chased around the house being beaten and not able to leave or call the police.”

Many viewers tweeted they were also confused. The story of the actual 911 call had not made the rounds to everybody. Some in the audience believed it wasn´t actually real although the 911call did happen and became famous after the 911 operator posted it on Reddit. 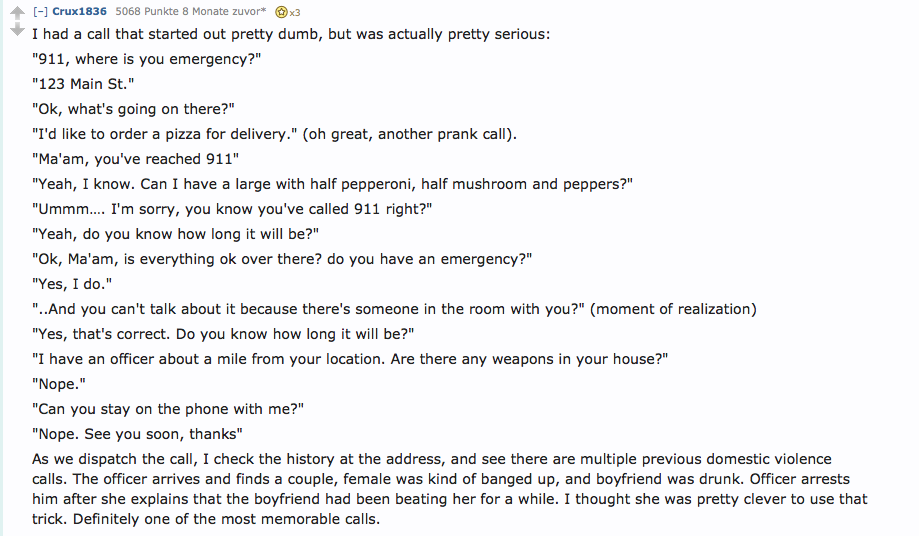 The 911 operator originally posted his story on the Reddit forum before it was picked-up by national media. (Reddit)

Dialing 911 for a pizza was the best ad so far. At first I thought it was a joke. #fb

I started laughing when the woman on the 911 call said “I’d like a pizza”. I thought it was a pizza ad. It was NOT a pizza ad

The confusion was also met with outrage because in some markets, the ad was followed by a commercial for a local pizza chain.

So they played a fake-pizza-dialling-911 ad back to back with a real pizza thing. That seems bad.

Concern was also raised over the overall message of the commercial. Many viewers believed that NO MORE just didn´t get their point across. Of major concern was also the placement of the ad right after viewers supposedly got up for half-time.

@richardroeper @NOMOREorg cmon, for first 20 secs it played like a humorous ‘I need pizza so badly I call 911 for it’ pizza ad. A tonal mess

#Superbowl ad on 911 call for #DomesticViolence and ordering pizza was rather confusing.

Laurie Cairns, an expert in creating brand strategies as well as forming mission statements and brand image and a victim of domestic violence herself, echoed the concerns of many viewers on the overall design of the ad.

“It´s not how it is. The shuffled house. It feels like it´s soft peddling it almost,” said Cairns, currently a managing partner at Blast! Marketing and PR in Chicago.

“The family pictures were kind of trying to say how it impacts the family, it tries to capture that, but doesn´t really capture that tension.”

Michael Oberman has produced several Super bowl commercials and has worked with large cooperations to craft a clear and understandable message.

While he believes it was well done, he said the message was simply not clear.

“Simplicity should be your number one priority,” Oberman said. “The last thing you want is someone being confused by your message. This feels very convoluted to me. If you miss that front end of the spot, you are kind of lost.

Where does it fit in to the whole outlay of (Super bowl) spots? I am confused by what they want from the audience.”

The NFL has tried to confront the issue of domestic violence since the video of Baltimore star running back Ray Rice punching his fiancée in an Atlantic City elevator appeared in February 2014. Partnering up with NO MORE is one in a series of attempts to repair the NFL´s damaged image. The effort also includes clinics for players as well as a memo that went out to all 32 teams identifying support organizations in the respective local markets.

“They waited until it was right in front of their eyes where they couldn’t but do something about it. They would never do any of the things they did unless they weren´t so publicly humiliated about how they handled the case in the first place.”