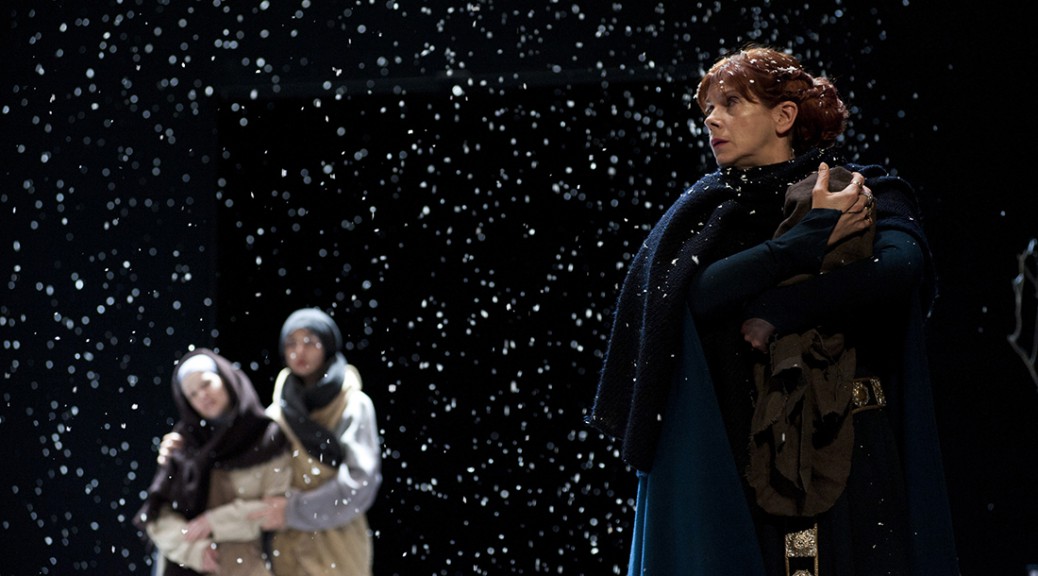 David Grieg’s Dunsinane may share a host of characters and a location with William Shakespeare’s Macbeth, but the similarities to the Scottish play end there. Dunsinane, a production of the National Theatre of Scotland and the Royal Shakespeare Company presented by the Chicago Shakespeare Theater, is a witty, gritty and sometimes uncomfortably familiar look at the aftereffects of foreign military occupation. Buoyed by spectacular performances, brilliant staging and a hefty amount of sheer novelty, Dunsinane overcomes its pervasive, somewhat heavy-handed metaphorical tone to shine as a unique and profound bit of stagecraft in its own right, independent of its illustrious parent.

The play begins as the English army led by Commander Siward, played with brisk efficiency by Darrell D’Silva, invades Scotland and kills Macbeth. Siward is there to restore order and secure England’s northernmost border. But he soon discovers Scotland to be far more inhospitable to strangers and even less inviting to their ideas than he had first supposed. The playwright, David Grieg, is open about parallels to Britain’s involvement in Iraq and Afghanistan that become increasingly obvious as the show winds towards its inevitable and heartbreaking conclusion.

Shakespeare’s version of events is treated as a propaganda tool of the established Scottish regime post-Macbeth ruled by the banal and somewhat foppish Malcolm, wonderfully underplayed by Ewan Donald.

“You told me the Queen was dead,” Siward exclaims, puzzled, at the beginning of the play.

“It seems you were mistaken,” Malcolm shrugs.

And just like that, Shakespeare’s history is acknowledged, addressed and unceremoniously disposed of.

Not that it matters much as Dunsinane winds its own course around three principal characters, none of whom bear much resemblance to their counterpart in the Bard’s original work. Commander Siward (a character who makes only one appearance at the end of Macbeth), Malcolm (the rightful king of Shakespeare’s play, seen here in a significantly less righteous incarnation), and Lady Macbeth (here a much more maligned and dignified queen, known as Gruach). The interactions and witty sparring between these characters, especially Malcolm and Siward, give the play its wry humor and dry commentary on the perils of foreign interference in local conflicts.

Donald’s flippancy and exquisite comic timing as Malcolm give the audience permission to laugh while being drawn deeper into a very bleak and twisted world. Malcolm is a product of his times and his country- ruthless, devious and eerily calm about it all. His exchanges with Siward are darkly funny as Siward struggles to make sense of the bloody political machinations around him and Malcolm stares bemusedly at him over a gilded cup of wine, enjoying the English soldier’s mental and moral quagmire. Siward is ultimately broken by his dogged insistence that all people are essentially the same at heart and by his good intentions, which end up a mangled, bloody mess. Siward seems to be the only one who did not see this coming.

The other interesting dynamic is that of Siward and Gruach, Shakespeare’s queen brought to icy new life by Siobahn Redmond. The two share a bond and their combative volleying highlights the cultural gulf between the Scots and the English. The romantic implications of their repartee, however, fall a bit flat.

Gruach is certainly not the crazed, hyper-ambitious woman of Macbeth who in one of the play’s iconic scenes demands her feminine qualities to be exchanged for murderous resolve. No, in Dunsinane, Redmond creates a Lady whose steely eyes speak only of calm. Though less recognizably murderous than her Shakespearean counterpart, her resolve is equally frightening. However, her performance pales somewhat compared with the sharply dissonant characters of Malcolm and Siward.