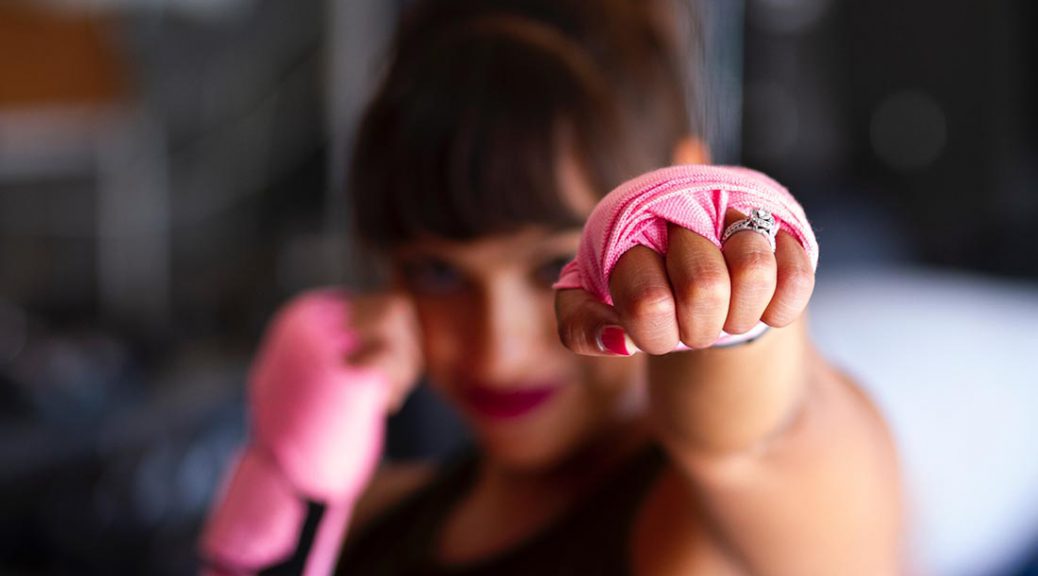 Chicago area women gather at Studio DelCorpo, 1115 W. Armitage Ave., every Thursday evening for Girls Fight Club to sweat, punch and kick their way toward healthier and stronger selves. During the sessions, women of all ages learn a blend of martial arts and boxing from Rachel Lavin, a national and international winner of several competitive fighting events.

The self-defense and workout class is all about building the confidence of women.

“[I have a] fifth degree Black Belt in [Shotokan] karate and I have a Black Belt in Jiujutsu,” Lavin said during an interview in which she, Cheryl Delio Malham—the owner and founder of Studio DelCorpo—and I sat on stability balls in the Girls Fight Club studio.

“Rachel is amazing,” Delio Malham said of her friend and colleague.

“I invited Rachel to come and teach me privately here,” said Delio Malham.

She originally trained in karate for five years but gave it up as an Orange Belt when her best friend and karate partner moved to New York. Returned to the art, she knew she wanted an individualized training, so she reached out to Lavin for one-on-one lessons.

After working with Lavin, Delio Malham realized the effectiveness of her teaching and the benefit of learning how to fight from someone with a widespread understanding of various styles. She also considered how other women could benefit from Lavin’s teaching if there was a space available for classes. Studio DelCorpo was the perfect fit.

“[Lavin] has this extensive fighting background, so that’s where the idea came from for Girls Fight Club,” said Delio Malham.

With the advent of the program this past March, Delio Malham and Lavin set out with a few goals in mind to make the classes most effective and comfortable for their students. First, they decided to make Girls Fight Club specifically for women. After visiting other studios in the past, Delio Malham had an image in mind of what she wanted and didn’t want Girls Fight Club to become.

“I thought it would be more comfortable for the ladies to not have to worry about [men] being super-guys, alpha-males next to them, and sweating on them [or where] the music is cranked and there are black lights,” Delio Malham said.

Lavin’s desire to lead a woman-focused fighting class stems from an experience she had as a child, where she felt unprepared to defend herself.

“I was attacked when I was in eighth grade. And I decided after that that was never going to happen again. So, that really began my interest,” Lavin said. “I think it’s really important to teach women how to defend themselves and to learn how to utilize their own power and strength.”

Following the same guidelines as Delio Malham’s Bespoke Fitness® brand, they also wanted Girls Fight Club to allow each student to gain individualized, face-to-face training. They accomplish this by keeping their class size to about a dozen women.

“You’re getting individual attention because of the small size. You’re not just getting lost in a room where somebody is yelling at you punching combinations,” Delio Malham said.

Finally, Delio Malham and Lavin wanted to create a safe space for all their students, regardless of their fighting and workout experience.

“All levels of fitness are invited to attend,” said Lavin.

They appear to be successful in creating this safe space, because they have regulars ranging in age from college students to women in their late-60’s.

“I think this is a better, safe environment,” said Delio Malham. “It’s welcoming because Rachel is welcoming.”

For those interested in joining this community of women learning how to fight, Girls Fight Club’s sign up is available online through Dabble or Classpass. The first 30 minutes of class from 6-6:30 p.m. costs $20. For the hardcore women out there, looking for a full hour workout, they can extend the class until 7 p.m. for an additional $10.

Delio Malham and Lavin expect that it will eventually expand to multiple days a week as their clientele grows.

So, go ahead. Take on a fight.

Photo at top: A quick shot after getting wrapped for the boxing gloves, before the ring comes off and the gloves go on. (Sarah Cervantes)