From China to the US: Tracking 14 days in exile

Two days after Xu Wu retrieved his passport in Shanghai, the Silicon Valley software engineer boarded a plane to Cancún after a 21-hour overnight layover at Frankfurt Airport. It was Feb. 18, just over two weeks after the Trump administration barred the entry of foreign citizens who had visited mainland China in the 14 days prior to the travel ban.

On the same day, Mrs. Li, who asked we identify her by the last name only,  went to the U.S. Embassy in Barbados to renew her visa. The 30-year-old Chinese woman works in Miami. Yida Yao, a research assistant at the University of California, Berkeley, was anxiously waiting for his Thai visa to be issued. Steven Li, a visiting undergraduate student who now studies in Boston, asked multiple airline companies whether he could travel with a passport issued in Hubei, the center of the coronavirus outbreak.

Thousands of Chinese nationals who planned to travel to the U.S. for work or school were stuck in China due to the travel restriction and these four were among them. To circumvent the restriction, they would have to travel and stay in a third country for 14 days to qualify for entering the U.S

Many of them who went into self-enforced exile, worried about catching or spreading the coronavirus on their trips. Some needed to renew or apply for U.S. visas in seemingly unlikely places. Travel policies in different countries kept changing. But to travel to the U.S. during the global coronavirus outbreak, they had no choice but to navigate a moving target of international crisis.

The travel restriction didn’t move Yida Yao into action at first. Then he thought of Thailand.

As a recent graduate, Yao booked a round-trip ticket between San Francisco and Beijing, both transferring in Wuhan, the provincial capital of Hubei. The Wuhan airport looked the same as usual in early January, though the local health authorities had announced more than 50 cases of pneumonia from “unknown reasons.”

Yao had no knowledge of the pneumonia, though he was concerned about the two plague cases in Beijing last November. Plague didn’t break out, but a virus that caused the pneumonia did, putting Wuhan and the Hubei province under a transportation lockdown. It was the assault of the new coronavirus, COVID-19.

Unable to transfer in Wuhan for his trip back to the U.S., he put off his flight until Feb. 7, learning that the White House opted not to halt flights from China to the U.S. completely. But the U.S. travel restriction took effect on Feb. 2 (Feb. 3 in China), just days before his flight.

Yao was scheduled to work as an unpaid research assistant upon his return. He could have changed his flight again to come back before the restriction went into effect. But he didn’t.

“It would cost several thousand dollars to buy a last-minute ticket,” he said, “I would rather spend the same amount of money for a 14-day trip in Thailand.”

Staying in an intermediary country for two weeks could give him access back to the U.S. He described his strategy as “buying money with time.”

He applied for a visitor visa of Thailand, traveling to the Phuket island before entering the U.S. The virus didn’t scare him away from boat trips and water slides at the beach.

Xu Wu had every intention to leave for the U.S. when the travel restriction was issued, but he couldn’t.

The software engineer had no way to retrieve his passport, which had to be submitted for the visa renewal. The H-1B visa granted foreign employees like him to temporarily work in the U.S. He applied for a renewal before the embassy closed for the Chinese New Year holidays. The visa was issued, but his passport was never returned.

Wu worried that his passport was lost. He spent two days dialing more than 20 numbers, including the embassy, the courier service, all possible branches of a Chinese bank which collaborates with the embassy to return applicants’ passports. No one knew where his passport had gone.

Thousands of Chinese who had passports and visas at that time changed tickets to return to the U.S., including his girlfriend, who received a call from her aunt at 5 a.m. on Feb. 1, Beijing time, when her aunt saw the news that the restriction would take effect 48 hours later.

Wu managed to get in touch with a staffer he knew at the U.S. embassy in Beijing, a friend of friend of friend of his, confiding to him that his passport might have never left the embassy. The staffer suggested that he wait until the embassy, closed due to the virus outbreak, resumed work.

Regular U.S. visa services in mainland China have been suspended since the Chinese New Year holidays in late January. Only emergency appointments were being accepted. Even now, staffing is “very limited” in embassies and consulates.

Still, three weeks after visa appointment, he received an email saying his passport was on its way to him. Wu obtained the contact information for the courier from a bank branch, requested the courier to prioritize his delivery, and watched him unpack packages one by one. He found his passport.

In the next 70 hours, he traveled from Shanghai to Cancún, transiting in Beijing and Frankfurt. He spent more than 24 hours on the plane, wearing a mask. He stayed 14 days in Cancún, didn’t catch the coronavirus but suffered severe traveler’s diarrhea in the final days. He stopped eating and planned for a prolonged stay at a local hospital. The fever was soon gone. He landed in San Francisco 17 days after his lottery moment. 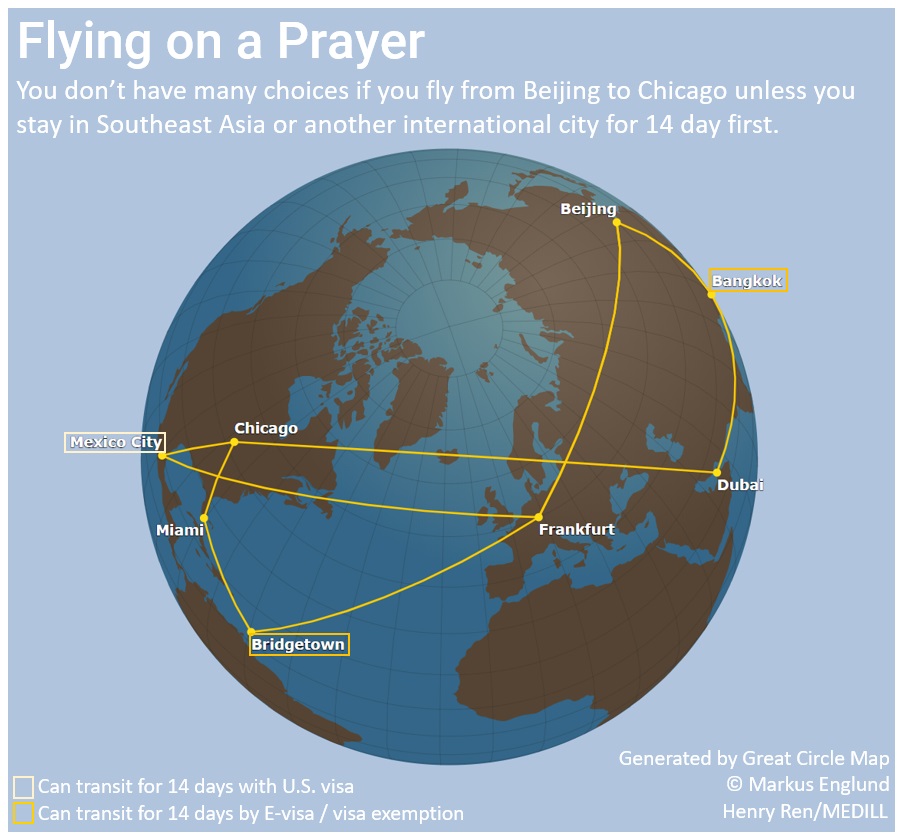 She asked two Barbadian nurses to send her into quarantine. They retreated.

Mrs. Li, the 30-year-old who worked in Miami, renewed her H-1B visa in Bridgetown, Barbados, a seemingly unlikely place for fellow Chinese travelers as the visa service in China was suspended.

Located in the Caribbean, Barbados is home to fewer than 300,000 people. The estimated waiting time before an H-1B visa appointment in Bridgetown is typically one day, an ideal scenario for applicants who could not afford to wait.

Barbados hasn’t issued any travel restrictions, and Chinese nationals can enter Barbados without a visa. Canada was open for entry in February, and daily flights were operated from Beijing to Toronto and Toronto to Bridgetown. The obstacle for Chinese travelers to execute this route is to have a visitor’s visa for Canada. Luckily, Mrs. Li had one.

Mrs. Li was summoned to the port health service upon arrival in Barbados. The only nurse on duty took her temperature while every official questioned her intensely. She was asked to point out where she lived on a map of China, and local officials thought her place was close to Hubei. Mrs. Li wanted to prove the actual distance was more than 500 miles away, but her phone’s internet connection was poor.

The nurse allowed her to dine out or schedule a visa appointment but told her she must wear a mask.

Mrs. Li was asked the same questions by customs and another two nurses who came to her Airbnb the next day. The nurses didn’t allow her to leave the house. She felt baffled.

“Send me into quarantine,” she said.

The nurses retreated. Mrs. Li went for the visa appointment 12 days after she left China. She thought her visa was about to be issued until the visa officer asked her whether she had been to China in the previous 14 days. She said yes.

The officer said her request could not be processed until two days later. Her pleading did not help right away, but she finally received her visa and returned to Miami a week later. She shared her experience in WeChat groups and more than five people reached out to her. Only one has tried out her route.

“The route is not for everyone,” she said. 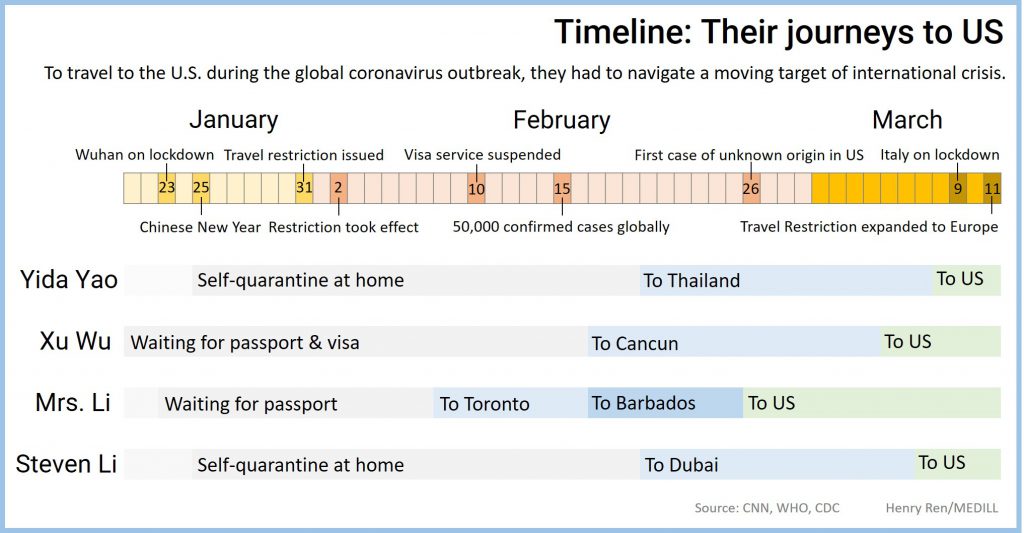 He risked everything to come to the U.S. But his lab was closed.

Steven Li, a visiting undergraduate student traveling to Boston, who is not related to Mrs. Li, spotted two Chinese people on his 11th day in Dubai. They had a 5-minute talk, but he didn’t wear a mask.

Mr. Li regretted his decision until 4 a.m. the next day. He saw the news that local health authorities in Australia confirmed a 20-year-old man from China had coronavirus. The man traveled to Dubai for 14 days before entering Australia.

He sometimes felt uneasy about going on the 14-day trip. He suspended courses at his home institution to pursue his research interest abroad, but he wondered whether traveling during the global coronavirus outbreak was a selfish act.

“I might be infected on the trip. And even if I quarantine myself for 14 days and display no symptoms, there is a possibility that I might catch the virus on the plane to Boston and the whole lab there can be affected,” he said.

The airfare had already cost him about $1,500. To save a night of hotel expenses, he went to the airport 20 hours before the flight was scheduled.

Rumors circulated in WeChat groups that some Chinese nationals could be “blacklisted” and prohibited from entering the U.S. from Dubai. The 21-year-old consulted more than 30 airport staff with all his questions. He didn’t want to repeat them again.

But the “blacklist” never appeared. Li wore a mask for 20 hours on his flights to Boston, couldn’t fall asleep for a consecutive period of 30 hours, and took off his mask for no more than 3 minutes, only when he was having meals. He was hesitant whether to wear a mask in the U.S. The Customs and Border Protection officer suggested he take it off.

Li thought he risked “all he had” for the one-year experience abroad. However, as the confirmed cases of COVID-19 exceeded 300 in Massachusetts, his lab was closed.

He spent four weeks in quarantine at home in China, another two weeks on exile, in exchange for a year of research experience that he valued, only to find out that an indefinite period of working from home awaits him.

Photo at top: Nearly all passengers wore protective masks on a flight from Shanghai to Toronto on Feb. 8. (Courtesy of Mrs. Li)