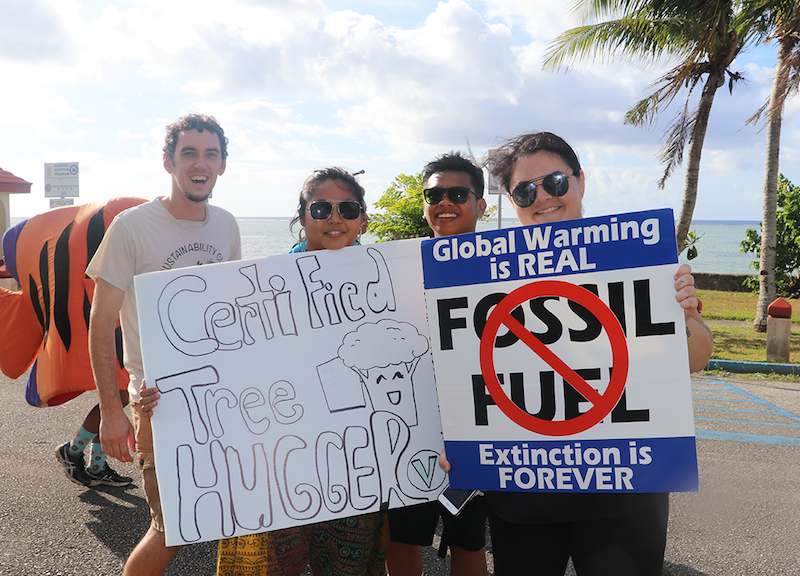 About 60 residents gathered at Paseo Stadium in Agana, Guam, on Saturday, April 13, in an act of solidarity with the island’s natural resources.

As Earth Month hit mid-swing, they carried homemade signs that said things like, “There is No Planet B” and “Certified Tree Hugger.” From local advocacy leaders to college students and schoolchildren, they assembled to participate in the second annual March to Protect Mother Earth.

The march came at a time when the U.S. territory is under considerable strain: forces including invasive species, coral bleaching and wildfires threaten the small Pacific island’s natural resources and wildlife while its consumption and population remain sky high.

“What we love, we can save,” Senator Sabina E. Perez announced to the crowd, after marching alongside the community members.

Sen. Perez is one of several newly elected legislators pushing forward an agenda bent on reevaluating Guam’s resource management and adaptation strategies. The Guam legislature has a host of bills under consideration, including a mandate for the Guam government to purchase energy-efficient products and electric vehicles, funding programs to address invasive species and creating a task force to strategize around the island’s oil disposal. Amid the noise, the marchers used their collective voice to press lawmakers to turn campaigns and proposals into actions.

Photo at top: Guam residents took to the streets during Earth Month to show their support for environmentally-friendly policies such as those incentivizing clean energy and natural resource preservation. (Hannah Magnuson/MEDILL)