Illinois is preparing for a potential coronavirus outbreak after the Centers for Disease Control and Prevention warned on Tuesday that some spread of the virus in the U.S. is expected.

Coronavirus cases have been confirmed in 53 countries, infecting more than 6,000 people outside of China, according to the World Health Organization situation report on Saturday. In the U.S., the CDC confirmed the first COVID-19 death in the Seattle area, while California, Oregon and Washington State have identified four cases of unknown origin, indicating that the virus could be spreading within U.S. communities.

In reaction to CDC’s Tuesday announcement, the Illinois Department of Public Health released a statement this week stating that Illinois was taking “all preventative steps available” to limit the spread of coronavirus, though the current risk remained low.

“While COVID-19 is not spreading in communities in Illinois or the U.S., there is evidence of community spread in several countries around the world and IDPH is committed to working across local, state, and federal agencies to ensure Illinois is prepared,” the statement said.

As of Saturday night, Illinois has identified three coronavirus cases, two involving a couple where one spouse had been exposed abroad. They have recovered and are released from home isolation, while the third patient has been hospitalized in isolation, according to IDPH. The third case was considered “presumptive” as of Saturday and is awaiting CDC confirmation. 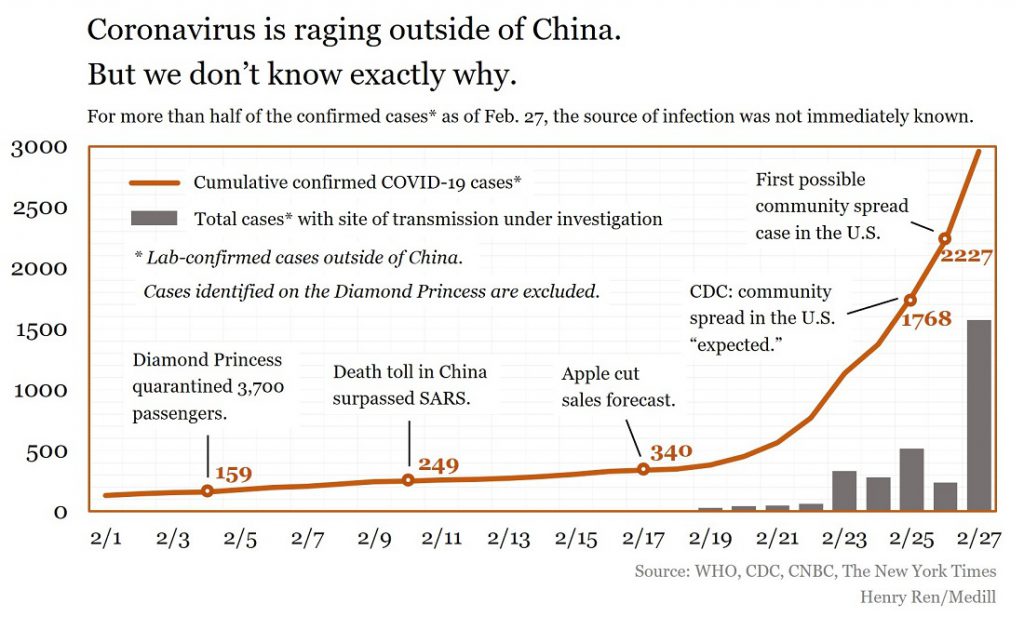 Businesses in Chicago’s Chinatown have been especially hard hit by the coronavirus outbreak.

“The community has already heightened awareness since the very beginning when folks first heard about the outbreaks in China,” said Grace Chan McKibben, executive director of the Coalition for a Better American Community, uniting 14 Chicago Chinatown organizations.

Since the end of January, several organizations have requested that their clients and staff who recently traveled to Asia remain at home for 14 days, she said. Several of the banquets to celebrate the Chinese Spring Festival were canceled due to worries that the virus might spread during gatherings.

“But there is a balance between giving people accurate information and not making people too worried,” McKibben said. “Businesses are hurting because folks are not coming.”

Allison Romer, director of development and communications of the Chinese American Service League, said her agency has increased janitorial cleaning operations in its Chicago building at 2141 S. Tan Court.

“Our janitorial staff is working increased hours to make sure that all the surfaces are disinfected regularly,” she said.

The agency also translates alerts and educational materials from the IDPH into Chinese, which are disseminated to its staff and other organizations serving Chinese immigrants through print and social media.

As of Saturday, Illinois had only two confirmed coronavirus cases. Both patients recovered and were released from home isolation, IDPH announced on Feb. 15.

Dr. Oluwadamilola Adeyemi, an infectious disease specialist at Northwestern Medicine, said educating the public to take basic hygiene is an important precaution under the current situation.

“Remember, we don’t have an outbreak here,” Adeyemi said.

Photo at top: Chinatown Square was nearly empty on the evening of Feb. 26. Businesses in Chinatown “are hurting” due to the fear of coronavirus, and Chinatown Chamber of Commerce has organized 32 businesses to offer discounts to encourage more consumption, according to Grace Chan McKibben, executive director of the Coalition for a Better American Community. (Henry Ren/MEDILL)