Family-focused and community-based approaches are more effective than incarceration in rehabilitating offenders and creating safe communities, according to a new report on Illinois’ juvenile-justice system.

Even when performing at their best, traditional prison-based systems not only fail in adequately supporting development and rehabilitation, but also cause an increase of costs and recidivism rates, according to the Children and Family Justice Center.

Being in detention for any length of time increases the risk of a youth’s being incarcerated as an adult, the report revealed.

“Cook County youth who were sent to juvenile detention were twice as likely -as youth with the same backgrounds who were not detained due to more lenient judges- to be incarcerated in an adult prison by the age of 25,” according to the report.

The Children and Family Justice Center’s year-long series of reports launched Thursday is part of a five-year plan to promote new alternatives to incarceration. After years of surveys, interviews, analysis of data and extensive research, justice center experts started the project to ultimately provide a detailed set of recommendations to end Illinois’ use of adult-modeled prisons within the next five years.

As part of the Bluhm Legal Clinic at Northwestern Pritzker School of Law, the center promotes justice for children and their families through direct legal representation, policy advocacy, and law reform.

“Within five years, no young person should be incarcerated due to a lack of community services, supervision or support, and every youth who is still committed to state custody should be held in a small, local, therapeutic setting,” Director Julie Biehl has told the Illinois House of Appropriations – Public Safety Committee.

Data already showed a significant decline in the number of incarcerated youth over the last 11 years. In 2006, when the Illinois Department of Juvenile Justice was created, prisons counted a total of 1497 youth, while in December 2017 only 424. 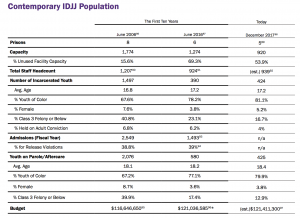 The justice center’s goal now is to invest more in prevention and rehabilitation by promoting youth treatment plans based on individualized services facilitating reintegration.

A deeper dive into the juvenile-justice system, with future reports examining the role of race, economics, family, and community in youth incarceration, will allow researchers and practitioners to explore these new horizons, said the series editor Stephanie Kollmann.