By Teresa Manring and Mariah Quintanilla

“Out of the bars and into the streets!” leaders yelled through megaphones. They invited passers-by and lingering Cubs tourists to join the group of about 50 people marching to Chicago Public Library’s Merlo branch on West Belmont Avenue to cast their ballots.
[vimeo 190637873 w=474]
The LGBTQ community has made tremendous political progress in the past few years. In 2010, Congress voted to repeal “Don’t Ask, Don’t Tell,” a law that prohibited openly LGBTQ individuals from serving in the military. In 2014, President Obama signed an executive order protecting LGBTQ employees of federal contractors from workplace discrimination. And in June, 2015, the LGBTQ community won its battle for nationwide marriage equality in the Supreme Court.

Though the tide has turned in favor of LGBTQ communities in the U.S., activists at the event stressed that the fight is not over.

“We have to act and we have to act now. We have to do this as a wider family and community,” said Derek Bagley, development director at Chicago Votes and co-organizer of the event. “If we don’t, we run the risk of setting ourselves back.”

Bagley said the massacre at Pulse nightclub in Orlando last June, when a lone gunman killed 49 people and wounded 53 others, demonstrated that there is still more work to be done.  Bagley called gay bars and nightclubs “sacred spaces for the queer community.”

He added that LGBTQ groups need to continue fighting for healthcare rights and on behalf of more marginalized members of the community, such as transgender people. More than half of LGBTQ people experience health care discrimination, according to a 2009 Lambda Legal survey.

Safety itself is still at stake for transgender people, said attendee Jodie Gardner, who is a regular at Replay and came out to march with her friends.

“Our trans brothers and sisters have the highest murder rate of any subsection of the queer community and that’s appalling,” she said.

“[This election] is extremely vital to everyone I care about and everyone they love and care about,” Gardner added. 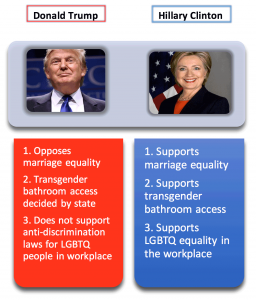 The march was the first time Ryan Willing of Organized Grime Crew, a nightlife promotional organization, was involved in anything political. He co-organized the event with Bagley and decided to participate this year because this election may affect him personally, he said.

“My husband is not from America. That’s one of the reasons why this year’s election has definitely made me focus a lot more on politics than I did before,” he said before the march.

Immigration has been a contentious issue in this year’s election, fanned by Republican presidential nominee Donald Trump’s anti-immigrant rhetoric.

The event was billed as nonpartisan, but many attendees were eager to share their views on which presidential candidate they believed would best represent their interests.

“Love Trumps Hate” and “Trump is Going Down” signs bobbed above the heads of the group as they made their way down Halsted Street in Lakeview. “Make America GAY Again,” was splashed across one attendee’s hat.

“As a queer person of color I have a lot of rights at stake,” said The Vixen, a Chicago-based drag queen/performer/activist with colorful braids and gold, sparkly eyebrows, standing outside the polling booth. “The Republican presidential candidate is not in favor of my kind of people,” she added.

The Vixen said she already cast a ballot for Democratic nominee Hillary Clinton, but she marched in solidarity with friends to ensure they knew how important it was to make their voices heard.

“I told them: don’t vote for Hillary, vote for yourself. Because at the end of the day, it’s gonna affect you on the microbial level. It’s really gonna trickle down to your freedom and your individual rights,” she said.

Chicago Votes is promoting voter outreach, registration and education in preparation for the election. The non-profit organization aims to get young people and other marginalized groups to the polls.

“We’re out in Roseland, we’re out in Englewood, we’re out in Boystown, we’re getting those people that are often marginalized,” said Nicole Johnson, field and outreach manager at Chicago Votes, who lives in Englewood. “We’re going all across the city to make sure that people use their voice at the polls.”

Johnson said the issues faced by the LGBTQ community are not so different from those faced by other marginalized groups.

“This event is important to me because, again, as a black woman, as an ally with the LGBTQ community, we are here today to affirm our humanity,” she said. “We wake up this way, we can’t change our identity and we’re prideful in that.”