Lowe’s Cos. Inc. fourth quarter operating earnings showed a solid increase, as the retailer of home-improvement and building products profited from the recovering housing market and favorable weather conditions.

However, excluding an impairment charge of $530 million for the company’s exit of an Australian joint venture, Lowe’s adjusted net earnings were $541 million, or 59 cents per diluted share an increase of 28 percent and in line with analysts’ expectations. 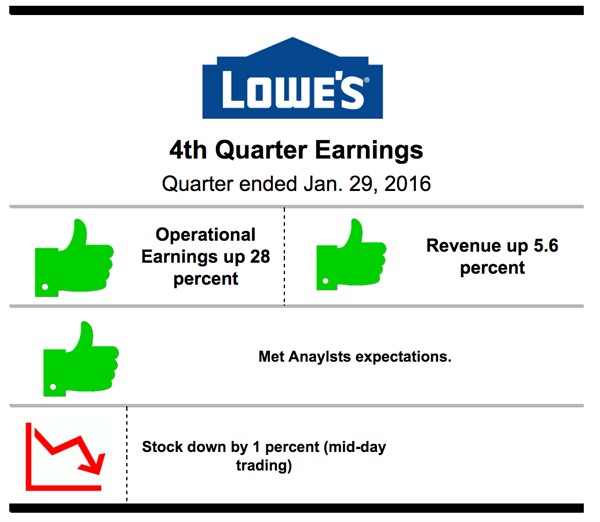 Revenue in the latest quarter surged 5.6 percent to $13.24 billion from $12.54 billion a year ago. Analysts on average were expecting revenue of $13.07 billion.

Lowe’s, and industry competitors including Home Depot Inc., are benefiting from the gradual rebound in the long-stagnant housing market.

In a recent survey the company conducted, most respondents said their spending levels will remain the same, but “While most survey respondents indicated that their spending levels are, they revealed that they’re more likely to allocate funds to home improvement compared to other areas,” the company said in materials that accompanied the earnings. .

Robert Niblock, Lowe’s CEO, also attributed this winter’s warmer temperatures as a reason consumers began coming through store doors at such a clip.

“We capitalized on increased demand for exterior products as a result of warmer weather, while at the same time helped customers tackle interior projects, allowing us to deliver positive comps in all product categories,” he says.

As a result, comparable store sales – those at stores open at least twelve months — climbed 5.2 percent higher this quarter ahead of analysts’ estimate of a 3.6 percent increase.

The 2015 net income is represented as adjusted earnings (in billions). (PoromaPant/MEDILL)

In mid afternoon New York Stock exchange trading Wednesday, a day when the broad market was under eavy pressure, Lowe’s shares were down 68 cents or 1% at $67.22.