Even though Illinois today supports fewer manufacturing jobs than it did before the Great Recession, Chicago-area vocational trainers see a persistent, unmet need for skilled machinists and industrial maintenance technicians.  Their starting salaries are in the $50,000 range, and with experience they can earn as much as six figures.

Guy Loudon, executive director of the Jane Addams Resource Corp., a Ravenswood non-profit that trains and places workers into Chicago-area manufacturing companies, said businesses are struggling to find qualified candidates for “middle-skilled” manufacturing positions, many of which give non-college graduates the opportunity to earn incomes well above the national average.

“From an employer’s perspective, there is an enormous skills gap,” Loudon said.

A 2015 study by Deloitte and the Manufacturing Institute backs up that assertion. The report’s authors surveyed 450 manufacturing executives about their workforce needs and found that a majority had serious concerns about their ability to fill open jobs.

Why a skills gap?

According to manufacturing trade groups, America’s education system has been pushing students away from vocational training because it is seen as inferior to college. Jay Timmons, president of the National Association of Manufacturers, testifying in 2013 before the House Committee on Education and the Workforce, lamented this perception among educators.

“For too many years, anything that looked or sounded like skills development was classified into a lesser accepted form of education,” he said. “It was defined simply as job training, non-creditable courses or career and technical education. In other words, it wasn’t considered real education.”

That view of manufacturing education could prevent current and prospective workers from filling the jobs of the future. In its analysis of Bureau of Labor Statistics data, the Deloitte report found that 3.4 million manufacturing positions will be created over the next decade. If the current skills gap persists, the report said, as many as 2 million of those jobs will go unfilled.

The Jane Addams non-profit works to close the gap in Illinois by focusing its training programs on key skills required by industry. “Manufacturing is very diverse, but within that we have our core competencies,” said Loudon. “Ours are things like CNC [computer number controlled] machining and welding, and we maintain some foothold in metal stamping.”

In order to ensure that its students receive the right technical skills training, JARC keeps in close contact with Chicago-area companies and modifies its curricula based on employer feedback. It even places field trainers at local businesses like Freedman Seating Co., a maker of auto seats, creating a pipeline for students to access open jobs as soon as they complete their JARC programs.

Ric Gudell, executive director of the Illinois Manufacturing Foundation, says that kind of cooperation is sorely needed, but manufacturing educators and employers aren’t getting the job done.

“Chicago continues as the metalworking capital of the U.S., but there is a divorce between education and manufacturers,” he said. “The two languages are not able to communicate.”

Like JARC, the Illinois Manufacturing Foundation is a non-profit that runs training programs for machinists and industrial technicians. In Gudell’s view, better coordination between business and vocational trainers will unlock opportunity for workers, even as manufacturing’s share of total employment continues to fall.

In Illinois, opportunities amid the decline

There is no doubt that, in terms of total jobs, Illinois’s manufacturing sector has contracted over the last two decades. The trend began long before the financial crisis of 2008.

Advances in automation, productivity gains and foreign competition all combined to squeeze out manufacturing jobs nationwide, and Illinois was hit particularly hard.

The manufacturing sector has not come close to recovering the losses it sustained during the Great Recession, even as overall employment has picked up. Today there are over 100,000 fewer Illinois workers in manufacturing than there were in December 2007.

Those figures do not tell the whole story, however.

Jim Nelson, vice president at the Illinois Manufacturers’ Association and executive director of its education foundation, said that high workforce turnover due to retirements will actually prop up demand for certain types of jobs in the state.

“The average manufacturer is going to turn over 5 percent per year for the next decade,” he said. “That’s about 26,000 production workers and 5,000 engineers through 2027.”

The Deloitte study highlighted another development that could create job openings: the potential for “reshoring” of manufacturing operations. According to the report, operating overseas is less attractive than it used to be, and about half of executives surveyed said they would consider bringing back at least a portion of their production operations by 2020.

“Proximity between R&D and production functions greatly benefits manufacturing companies through streamlining processes, reducing product development time and cutting intangible costs,” the report said. “Thus, the case is mounting for manufacturers to bring back operations, as well as jobs, to America as long as they can find the workers.”

Given those potential labor market developments, manufacturing workers may have more opportunities than overall employment trends suggest. The key challenge facing businesses, then, is to figure out how to recruit and train job candidates, especially for those high-skill occupations like industrial maintenance technicians and CNC machinists.

Welding stations at the Jane Addams Resource Corp. training center. JARC provides in-house training to Chicago-area businesses and receives donations of training supplies in return. Those partnerships help the school place students into jobs after they graduate. (H. Will Racke/MEDILL)

To meet the challenges of education and recruitment, says Nelson, trainers and employers have to coordinate their efforts.

“Partnerships are of critical importance,” he said. “Both manufacturers and educators are realizing they have to work together.”

In one such arrangement, the Illinois Manufacturers’ Association teamed up with Harper College in suburban Palatine to offer a three-year apprenticeship for industrial maintenance technicians. After securing a $4 million federal grant, IMA plans to expand the program to other community colleges in the area.

JARC reaches out to private business directly, establishing relationships with company executives who then come to see it reliable source of qualified workers. Metals and Services, an Addison, Ill.-based maker of custom metal products, looks to JARC when it needs welders, and the company donates steel and other training supplies for use in JARC classes.

Loudon believes that model will become more common as state and local governments realize that training programs need to be more responsive to the needs of business.

“There is a strong bipartisan consensus that we need to have a more relevant, employer-driven approach to workforce development,” he said. “We need to put an end to ‘train and pray.’”

The national Workforce Innovation and Opportunity Act, which took effect in July 2015, is one attempt to move jobs training in that direction. The law directs states to align their workforce training programs with employers’ needs.

In the manufacturing sector, Illinois fulfills its responsibilities under WIOA through its Accelerated Training in Manufacturing program, which allows businesses to request pre-employment or on-the-job training to meet their anticipated skills requirements. The initiative is funded with state and federal grants administered by the Illinois Department of Commerce and Economic Opportunity.

Developing a well-trained manufacturing workforce is especially important in Illinois, where manufacturing remains a key part of the state’s economy. 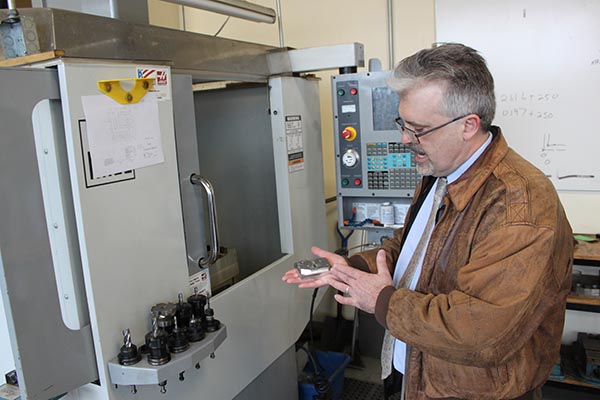 Above, JARC executive director Guy Loudon displays a machined part created by one of the students in the CNC machinist training program. Click on the Soundcloud link to hear more from JARC instructors and students. (H. Will Racke/MEDILL)

Manufacturing accounts for 14.1 percent of the Illinois economy with a total output of just over $100 billion—the third-largest manufacturing base in the country after California and Texas.
Bob Johnson, director of economic analysis at Morningstar, says manufacturing punches above its weight because of its wage and production value.

“It has good-paying and long-hours jobs, although it doesn’t drive employment the way it used to,” Johnson said. “It still adds a lot of value. You can’t underestimate what companies like Boeing or the auto industry do for the U.S. economy.”

According to a report by the National Association of Manufacturers, in 2013 the average annual compensation for Illinois manufacturing workers was $78,971—48 percent better than the average of $53,276 in other non-farm industries. Manufacturing jobs often provide a path to the middle class for workers who do not have a four-year degree.

Many of those jobs, however, require advanced skills that aren’t taught in public vocational schools.

According to Gudell, the problem is that few area high schools or community colleges offer training for careers in manufacturing due to either a lack of funding or insufficient commitment to mechanical education.

“There is nothing in place that leads to an apprenticeship or develops personnel for those industries,” he said.

The City of Chicago has tried to remedy the deficiency through various public-private initiatives. One highly publicized effort was the creation in 2007 of Austin Polytechnical Academy, a career academy located on the site of the old Austin High School on Chicago’s West Side, an area of high unemployment and low incomes.

Now called Austin Multiplex High School, it was the brainchild of labor activist Dan Swinney and the Chicago Manufacturing Renaissance Council, a coalition of area business, labor, and education leaders. The school is part of the council’s mission to revitalize the neighborhood through community-building initiatives in manufacturing and workforce development. Its Manufacturing Connect program provides students with a curriculum built upon the latest industry standards and accredited by groups like the National Institute for Metalworking Skills.

A 2014 Chicago Tribune article identified problems at Austin Multiplex, including poor test scores and low enrollment, but Swinney explained that Manufacturing Connect is just one program inside the school and is not responsible for standardized test scores or larger administrative tasks.

“People were conflating the program with the Austin public school,” he said. “Manufacturing Connect is a program within the school, and it can work within any school.”

Despite initial difficulties, Manufacturing Connect has been successful in terms of credentialing and job placement. Between 2010 and 2015, it placed almost 250 students into manufacturing internships and summer jobs and issued 280 nationally-recognized industry credentials.

The city remains committed to Austin Multiplex and Manufacturing Connect. In 2014, it secured a $2.7 million grant from the U.S. Department of Labor to bolster the school’s careers program, which seeks to create a pipeline of skilled workers for the metro area manufacturing economy.

While Chicago’s public school system struggles to develop similar career programs, both non- and for-profit training schools have stepped in to fill the void.

“Schools are looking for alternatives to college, not everybody is going to college,” Gudell said. “Unless somebody knows about manufacturing, how can they talk about it to the students?”