They each shared confident thumbs up and generic good-natured banter with voters and media as they both predicted victory.

Both mayoral candidates started greeting voters at 6 a.m. at train stations across the city. 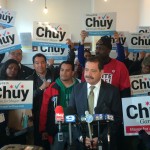 Turnout could prove critical to the outcome of this election, especially for the grass-roots campaign of Cook County Commissioner Jesus “Chuy” Garcia, Continue reading →

Garcia started at the Chicago Transit Authority Jefferson Park Blue Line station where he spoke to voters, the media and rubbed the paint-chipped nose of the Thomas Jefferson statue for good luck outside the station.

He also spent time at the Merchandise Mart Brown Line station around 9 a.m. before heading to his canvas kick-off at his field office on Hubbard Street.

He later plans to greet voters at Ms. Biscuit, a restaurant on Wabash Avenue, talk to students on State Street and meet voters at the 18th Street Pink Line station this evening.

Emanuel’s schedule is less full, starting by shaking hands and taking pictures with voters in the 8th Ward at the 95th Street Red Line station. Emanuel told voters “it’s their future on the ballot,” and he will eat lunch with supporters at Manny’s Deli on Jefferson Street this afternoon.

Voters will have until 7 p.m. to end Chicago’s first-ever, six-week runoff at polls across the city to settle 18 aldermanic races and decide who will be the Chicago’s next mayor.

Campaign advertising seeks to sway minds up to the last minute

Campaign advertisements unabashedly seek to sway your mind as they glorify candidates, nudge opinions and try to cinch the outcome of an election.Continue reading →

More than 142,000 people voted in the early voting period, which is more than double the amount of early votes in the February early voting period. As voters head to the polls to choose between Emanuel and Garcia, they use the Twitter megaphone to share their thoughts on the election with divisive hashtags, such as #dumpRahm, #chuy2015 and #ImWithRahm.

Passing out #Chuy2015 flyers at polling place in Beverly. Most common comment: “I don’t need the flyer. I’m voting for Chuy.”