It had been 46 days and 11 games since the Northwestern University men’s soccer team played a winning match.

But Friday on senior night against Division III opponent Concordia-Chicago, the Wildcats ended that winless streak with a 6-0 beatdown of the Cougars in addition to honoring the squad’s six seniors.
Head Coach Tim Lenahan knew, coming into the game, that his side would generate a lot of chances to put the ball in the back of the net.

“Looking at the schedule and how difficult it was all year, we really wanted to have a game where we could have the ball a little bit more,” Lenahan said. “

A win on the final day of the season means the Wildcats will finish with a 5-8-5 record overall, with a 0-5-3 mark in Big Ten play. It is Northwestern’s first winless Big Ten season since 2003.

But the Wildcats’ victory added a measure of glory to the close of the season. Camden Buescher led the charge for Northwestern with three goals and an assist in his final regular season game at Martin Stadium. As a team, the Wildcats matched its goal output for the last 11 games with other goals coming from forward Jose Del Valle, defender Jake Roberge and midfielder Matt Moderwell.

Buescher conceded that, after his second goal, he was absolutely thinking about picking up a hat trick on senior night.

“I’d be lying if I said it didn’t creep through my mind,” Buescher said. “But all in all it was a good team win and I’m proud of the guys.”

Buescher finished the regular season with six goals and two assists, contributing to a team-high 14 points.

But Lenahan said plenty of other teammates played quality soccer over the course of the evening.

“I don’t think Mac Mazzola lost the ball all night,” Lenahan said. “He doesn’t usually play in that [holding midfielder] position but you can see his vision and how easy the game is for him.”

Lenahan added that in addition to Mazzola, players such as first-year Connor McCabe and junior Sean Lynch made the game easy for the Wildcats and helped dictate what seemed like endless possession.

In addition to dominating the possession battle, Northwestern throttled Concordia-Chicago when it came to other statistical measures. The Wildcats took 26 shots on the evening to the Cougars’ three shots and had nine corners on the night while Concordia-Chicago had one.

After the conclusion of the regular season, Northwestern will turn its attention to the Big Ten tournament, which begins Friday in Westfield, Indiana. As the number eight seed, the Wildcats will face the Ohio State Buckeyes, with the winner moving on to face top-seed Indiana University.

The last time the Wildcats and Buckeyes matched up, the two sides played to a scoreless tie in double overtime. However, the Wildcats had a one-man advantage for most of the game as Ohio State received a red card early in the second half.

For Buescher, he’ll know if it’s going to be a successful match based on one simple metric.

“I think just like we did tonight coming out and getting an early goal,” Buescher said. “Last time against Ohio State, we had the majority of possession, but we couldn’t put one away, so getting one early will be critical.”

Should the Wildcats win against Ohio State on Saturday, it will be Northwestern’s first two-game winning streak since early September, and the team would move on to face Indiana on Sunday. 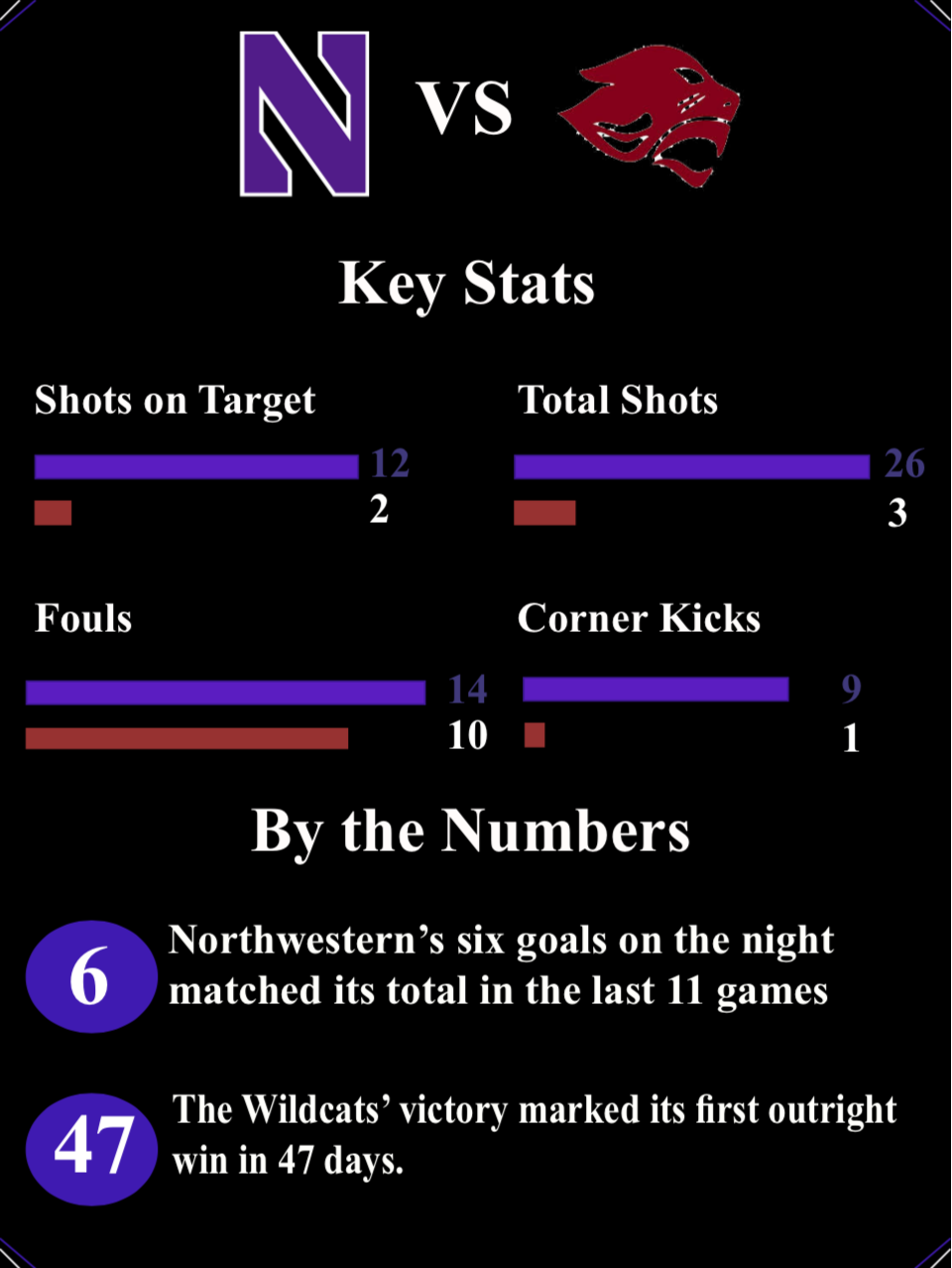 Photo at top: Midfielder Sean Lynch crosses a ball into the box for waiting attackers.(Nichilas Hennion/Medill)