On a scale of 1 to 10, how helpful are self-monitoring tools for mental health?

You settle into your seat on the bus and open the app with the virus icon.

Self-monitoring tools are becoming a part of our daily lives.  While those for COVID-19 prompt us to consider our physical health, the less familiar territory of mental health tools helps people tune into and track their moods, behaviors and other symptoms.  These include pen-and-paper tools, from journaling about what you did and how you felt that day, to coloring in hand-drawn charts.  They also include smartphone apps and other digital tools where you can input observations about your mental health, such as rating your mood on a scale of one to 10. 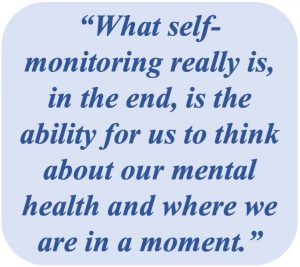 “What self-monitoring really is, in the end, is the ability for us to think about our mental health and where we are in a moment,” said Lisa Razzano, an associate professor of psychiatry at the University of Illinois Chicago and the vice president of research at the mental health service provider Thresholds.  “What are the circumstances when I feel well and what are the circumstances when I don’t?”

At a time when many people are looking to take stock of their mental health, a natural question arises: Should these tools be used without the guidance of a mental health professional?  For those with more severe mental health conditions such as bipolar disorder, self-monitoring should serve as a complement to rather than a substitute for professional help, experts advise.

“I think the danger, from my perspective, is that it can be seen as replacing the interaction that has to happen between the patient and the professional,” said Paul Pendler, a clinical assistant professor of psychiatry and behavioral sciences at Northwestern University.

However, people with mild or temporary symptoms related to a life change, for instance, can safely explore using self-monitoring tools independently, experts say.  When self-monitoring on your own, though, it’s important to make sure some resource is filling the role of the professional in helping you use the information you gather productively, explained Sheehan Fisher, an assistant professor of psychiatry and behavioral sciences at Northwestern University.  He recommends pairing documentation tools with a self-help book that is supported by scientific evidence, such as those recommended by the American Psychological Association.

Some mental health mobile apps serve both purposes, proposing action items based on the data they record. “For people that have more mild issues, smartphone applications could ultimately be a perfectly adequate substitute for a real live person,” said Stewart Shankman, the chief of psychology in the Department of Psychiatry and Behavioral Sciences at Northwestern University.

When self-monitoring with an app, it’s critical to select one that’s backed by sound research, according to Shankman.  It’s also important to ensure that the app is responsive to the moods and behaviors you think it is, Razzano explained.  “We might think, ‘I feel X, I’m going to pick this app,’ and the app actually works on Y versus X,” she said.  Razzano recommends using the American Psychiatric Association’s App Evaluation Model to find a credible app that’s a good fit for you.

Even then, it’s important to evaluate if self-monitoring independently is meeting your needs.  Yesenia Castaneda, a 30-year-old business analyst from Detroit, Michigan, used the app Ginger to help her cope with seasonal affective disorder and isolation during the pandemic.  While she recognized the value of reflecting on how she was feeling, she realized that she needed more personalized feedback and started seeing a therapist.

“The app was picking up on keywords… it was much more formulaic,” Castaneda said. “I find that the therapist is able to unpack things on a deeper level than just, ‘Oh, you’re feeling sad.  Go for a walk.’”

Like Castaneda, many people need two-way conversation to understand how to translate awareness of their mental health into changes to improve it. “I think working with a psychologist or psychiatrist to help process and figure out what that [insight] means in terms of treatment is useful,” said Christina Boisseau, an associate professor of psychiatry and behavioral sciences at Northwestern University.

Self-monitoring records can allow mental health professionals to obtain a clearer picture of someone’s condition by helping the person recall and communicate their symptoms more accurately.  “It can help you discuss what’s going on in your day-to-day life with your psychiatrist or psychologist,” Boisseau said.  “Our recollection is often different than what actually happened at the moment or how we felt at the moment.”

Additionally, a professional can help interpret self-monitoring data to identify any patterns or trends in the symptoms.  “One of the things we look at it is: Are there particular situations or events in your life that trigger an anxious or depressed or other mood?” Boisseau said.

Victoria Watters, a 28-year-old student from Westwood, Massachusetts, journaled regularly about her anxiety in addition to meeting with a therapist.  “It was a really helpful tool during therapy because I would have space to process by myself and then a counselor to talk through things,” she said.

Watters said journaling helped her recognize that her anxiety peaks when she is not taking care of her needs—something she had been conditioned to do as a child.  “I grew up in a pretty abusive home, and I feel like women in general were kind of expected to take a smaller portion of anything, whether that’s a meal or time or attention or whatever,” she said.  “Times my anxiety has been the most intense is when I’m actively denying myself in times when I should be advocating for myself instead.  As I’ve gotten older, my anxiety, in that way, is not as intense because I speak up more.”

While it has yielded valuable insight into her condition, being so attuned to her emotions has been difficult for Watters at times. “Journaling does feel like a very pointed opportunity to know how I’m feeling,” she said.  “I think the self-awareness can be kind of intense.”

One concern surrounding self-monitoring is the risk that this heightened self-awareness could ultimately reinforce negative symptoms. A study of people with bipolar disorder found that those who engaged in daily mood tracking using a smartphone app displayed worse depressive symptoms than those who did not.  “I think it’s a really fine line between spending too much time on an app almost overemphasizes the problem,” Pendler said. 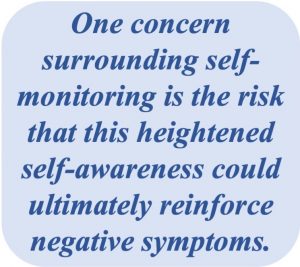 This may be the case if someone perceives self-monitoring practices as a reminder of their symptoms.  Another study of people with bipolar disorder found that 43% of participants who engaged in daily mood tracking reported that the tool served as an unpleasant reminder of their condition.  “It’s hard to get away from the idea that you have a chronic illness when you’re engaging in this kind of daily self-reflection about your mental health,” said Emma Morton, a post-doctoral fellow at the University of British Columbia who studies digital tools for mental health.

Negative symptoms can also be reinforced if someone is not satisfied by the degree of improvement reflected in their self-monitoring data.  “Sometimes, change takes a little while,” Pendler said.  “If you’re not aware that it may take a little while and you don’t see your numbers coming down, you may wind up getting more anxious.”

Mental health professionals are cognizant of the potential pitfalls of being hyper-attuned to symptoms and can offer support as people adapt to self-monitoring.  “Being more aware of those things could create emotional distress, and it might be useful for them to have someone to talk to,” Fisher said.

Additionally, a professional can assess an individual’s needs to determine which specific self-monitoring tools are right for them.  “The type of self-monitoring we ask patients to do really depends on what they’re presenting with,” Boisseau said.  “It needs to be… tailored to the person, their goals, their values and what they’re dealing with.”

For example, people who tend to fixate or ruminate on negative experiences may require strategies to prevent self-monitoring from becoming all-consuming.  “You will have to give them some tools to be able to document, but then redirect their attention back to the present moment, rather than that being a trigger for them to spiral out,” Fisher said.

Some clinicians may advise against self-monitoring altogether for people with these tendencies. “When I work with people like that, I basically just want them to go with the flow, and documenting and using an app is the antithesis of going with the flow,” Pendler said.

Alternately, the timing and rigor of self-monitoring regiments can be adjusted as a person’s needs evolve.  “Over time, maybe you don’t need to be constantly checking in with yourself.  And even being reminded of some of these things, it’s not beneficial anymore,” said Elizabeth Murnane, a professor of engineering at Dartmouth University who studies technology for human wellbeing.  A mental health professional can help implement these “moments of tighter or looser monitoring,” as Murnane said, to maximize its value for an individual.

Another approach that a professional may recommend is monitoring a broader range of areas of life.  In one qualitative study, Morton asked participants with bipolar disorder to use a “quality of life” tool to reflect on 14 different life areas ranging from money to leisure to self-esteem to relationships.  Many reported that the tool helped combat the sense of discouragement they encountered using other forms of self-monitoring.  “It was quite validating to reflect on a broad range of life experiences, not just their symptoms,” Morton said. “It picks up areas of strength as well as areas that people might be struggling with.”

Mental health professionals also play a critical role in highlighting growth in an often gradual and non-linear path of progress.  They can point out that even if someone is not yet where they want to be, they have come a long way from where they were.  “It can be helpful to show people that this situation that used to make you very anxious is only making you moderately anxious now,” Boisseau said.

Watters’s therapist provided specific journaling prompts such as, “What has your anxiety taught you?” that helped her find meaning in her journey, even if it wasn’t one of constant progress toward treating her condition.  “Even just the reframing of ‘What has my anxiety taught me?’ versus ‘How do I overcome my anxiety?’ was really helpful,” she said.

As we ventured into another sensitive and personal topic, I asked Watters if she wanted to take a break.  “That’s okay,” she replied.  “I’ll just journal about it later.”

Sarah Anderson is a health, environment and science reporter at Medill and a Ph.D. chemist.  Follow her on Twitter @seanderson63.