Open any medicine cabinet in any bathroom and you are likely to find some form of ibuprofen, aspirin or acetaminophen. These generic NASIDs (Nonsteroidal anti-inflammatory drugs) act as painkillers, fever reducers, and are a first line of defense in curing general aches and pains.

They can be found in many over the counter medicines. While many people treat these drugs as interchangeable, there are strengths and weaknesses to each.

Information from story sources and packaging labels. Produced by Valerie Lapointe via Piktochart

“Acetaminophen has an excellent safety profile when administered in proper therapeutic doses, but chemical driven liver damage can occur with misuse and overdose. In the United States, acetaminophen toxicity has replaced viral hepatitis as the most common cause of acute liver failure and is the second most common cause of liver failure requiring transplantation.” said Dr. Susan Farrell, assistant professor of medicine at the Harvard School of Medicine in an article on Med Scape.

Adhering to the recommended dose is critical. The National Institute of Health’s Medical Encyclopedia says “Acetaminophen overdose is one of the most common poisonings worldwide. People often assume this medicine is very safe, however it may be deadly if more than the normal or recommended amount is taken.”

The Federal Drug Administration medication guide for NSAIDs states, “The exact mechanism of acetaminophen is not known. Acetaminophen relieves pain by elevating the pain threshold, that is, by requiring a greater amount of pain to develop before it is felt by a person. It reduces fever through its action on the heat-regulating center of the brain. Specifically, it tells the center to lower the body’s temperature when the temperature is elevated. Acetaminophen relieves pain in mild arthritis but has no effect on the underlying inflammation, redness and swelling of the joint.”

If you are trying to treat a hangover headache, better to choose Ibuprofen. Ibuprofen, however, has been shown to increase salt and fluid retention, so for women needing relief from menstrual symptoms, it may relieve your cramps but make your bloating worse.

Aspirin, one of the oldest drugs which can trace it’s origin back to the time of Hippocrates,  shouldn’t be given to children or teenagers, as it could result in Reye’s syndrome, a serious condition that causes brain swelling. Low dose aspirin, or as it used to be called, baby aspirin, isn’t actually for babies at all, but is the dose  used as a part of a regime for those suffering from certain heart conditions, 81 mg compared to the normal 325mg. “I generally only recommend aspirin if a patient has a heart condition,” said Northwestern Medicine Pharmacist Vanessa Copeland. “It isn’t typically recommended as a general pain reliever over Ibuprofen or Acetaminophen.”

Ibuprofen has been shown to be more effective as an anti-inflammatory, for minor physical injuries and treating swelling due to arthritis. It can also be used by children under 6 as well as pregnant or nursing mothers. 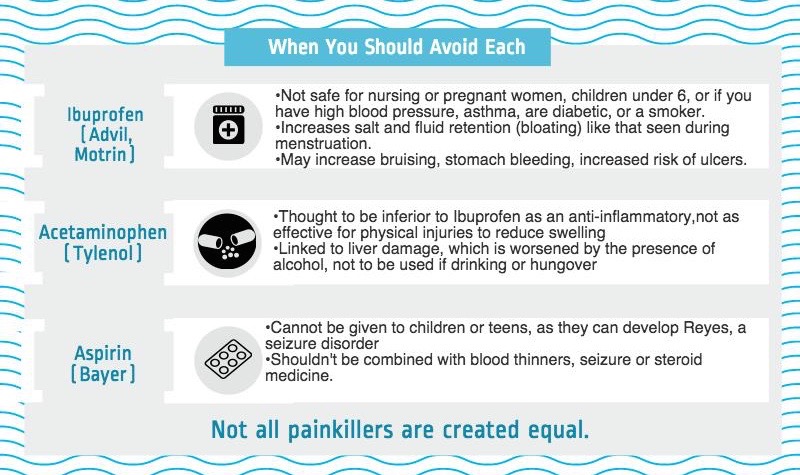 Information from story sources and packaging labels. Produced by Valerie Lapointe via Piktochart

Knowing the differences between these over-the-counter painkillers can make a difference in providing the best relief for your situation as well as avoiding potential side effects.

Photo at top: Shelves of over-the-counter painkillers leave consumers asking: Which one do you choose? (Valerie Lapointe/MEDILL)