Power up your fingers to climb higher

Rock climbing’s debut in the Summer Olympics in Tokyo last year helped peak interest in the sport. After viewing videos of athletes hanging by their fingertips and even upside down, many people wanted to try climbing out for themselves. To increase your chances of sending a climb (that is, completing one without falls), you need strong fingers. But how can you get them?

It’s simpler and safer to grip anything (especially a climbing wall) with your whole hand rather than with just your fingertips. So, beginners should start out with large “holds” or “jugs” and leave tiny “pockets” and “crimps” for later. “It’s easy to get an injury from pulling too hard,” said former pro-climber and American Ninja Warrior Matt Wilder. “Doing a good warmup is critical for preventing injury. Start with juggy climbs and work your way to things that are more fingery.”

Try these tips to get dexterous digits of steel — and to also be the go-to person for opening kitchen jars.

Play around on the moonboard

The moonboard – a standardized training wall – improves grip strength and strengthens fingers to better grasp tiny holds. A two-hour moonboard session at least once a week will do wonders for finger strength, said Claire Gordon, a climber and coach for nationally ranked Team ABC who recently scaled Water Hazard in Bishop, California.

“I like them because it’s basically like a pull-up for your fingers,” said Molly Mitchell, a professional trad and sport climber. “It’s such a good training tool in my opinion for simulating that feeling of just being so pumped you can’t reel it in when you hit an edge.” To execute finger rolls, start with a three-finger grip position on a rung. Close both hands into a full crimp at the same time. Release back to open hand and repeat, going from open hand to closed hand. Many people practice finger curls on a campus board, which is a slightly overhanging, suspended wooden board with different-sized edges and holds in evenly spaced vertical increments. 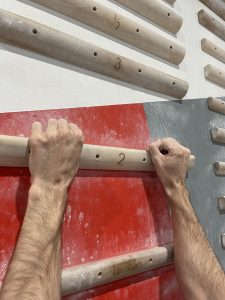 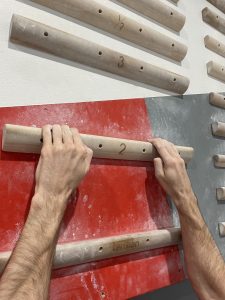 Hang on the hangboard

As the name implies, you simply hang from a hangboard. This wood or plastic beam contains holes or grooves you can grip using a varying number of fingers. It attaches to a wall or door frame so you can simulate the motions of rock climbing. Hangboarding efficiently increases strength in your arms, hands and fingers; it’s a climber’s best friend other than chalk. (Chalk helps climbers secure a proper grip by drying up sweaty hands and inducing friction.) Incorporating a hangboard workout of 10 to 20 minutes two to three times a week helps Olivia Jacobs, who designs artificial rock-climbing wall routes, be able to tackle harder routes without her fingers getting too strained.

Competitive climber Aishi Goel used a lot of TheraPutty (commonly used during rehabilitation to improve hand strength) when recovering from finger surgery to repair a fracture and torn ligament. “Starting off with an easy resistance, I would make circles with the putty and stretch it out with my fingers,” Goel said. “Repeat for a few minutes at a time, taking breaks in between. You can eventually work your way up higher resistances.”

This pocket-size tool – which contains individual spring-loaded buttons for each finger – strengthens fingers, hands, wrists and forearms. You can exercise each finger individually, or the entire hand, to develop strength, dexterity and endurance. Jacob leaves one in her car to use when she’s stuck in traffic, she says.

Pro-climber Matt Fultz trains with a tension block to strengthen his fingers. “If you attach the block to a loading pin and some plate weights,” Fultz said, “then you can do single-arm ‘no-hangs,’ which takes pressure off your shoulders and really isolates your fingers and forearm flexors.”

Climb, climb and climb some more

The best way for climbers to strengthen their fingers is to just climb, according to Gordon and Wilder. Change surfaces, from slab (where the rock face is at an angle less steep than vertical) to overhang (where the rock face is a slope of more than 90 degrees), and climb on various holds, from pinches (holds with edges on either side that allow you to position your thumb opposite your other digits) to crimps to slopers (rounded holds that lack any lip or edge to gain a good grasp on). “Do lots of volume at the gym or outdoors if possible,” Wilder said. “This leads to simultaneous improvements in technique and body strength too. Focus on trying problems that test your weaknesses – so if your weakness is crimps, seek out crimpy problems.”

Finger injuries can be a climber’s worst nightmare, so here are tips to keep those fingers healthy.

Take time to properly warm up and always listen to your body. “Start climbing on jugs and then slowly work into smaller and smaller holds,” Gordon said. “It is important to do finger stretches before starting. If you have any aches or pains in your fingers, it is time to back off, take some rest and ice your fingers.”

To prevent injuries, be smart and know your limits, Jacob said. “If you make a dynamic move to a crimp and catch it with less fingers than you intended to, sometimes it’s worth it to just let go and drop off, instead of trying super hard to hold it and potentially straining something.”

“Taping a finger that is weak can provide some support and help prevent injury or speed recovery,” Jacob said. Proper taping adds a protective layer above your skin and supports injured soft tissue such as pulleys and tendons.

Listen to your body and rest. “Although it’s easy to get sucked into trying a move on a route ‘one more time,’ sometimes the smarter thing to do is to just move on and attack it again another day,” Mitchell said. “You don’t want to be throwing to a small hold again and again when you’re tired and losing form.”

*Send: Doing a climb without falls, regardless of the amount of times you’ve tried the route/problem.

*Jugs: Large holds and most jugs should have space for both hands to fit on the hold. Jugs are usually seen on beginner climbs, as they are easy to hold.

*Volumes: The giant prism features that are attached to the wall like any other climbing hold, yet they provide places to attach other holds.

*Crimps: Small edges and the small (tiny) climbing holds. When you crimp a hold, you are grabbing the small edges with your fingertips flat on the surface while the fingers arch above their tips.

*Slab: Where the rock face is at an angle less steep than vertical.

*Overhang: Where the rock face is a slope of more than 90 degrees.

*Pinches: Holds with edges on either side that allow you to position your thumb opposite your other digits.

*Slopers: Rounded holds that come in all shapes and sizes. The key attribute of a sloper is the lack of any lip or edge to gain a good grasp on.

*Both sport climbing and trad climbing are a form of lead climbing, which means the first climber to go up is not protected by a rope from above. A trad climber carries not just quick draws, but also a whole rack of climbing gear consisting of cams, nuts and sometimes hexes that get placed into cracks in the wall; they are basically placing all the necessary protection gear required to arrest any falls as they are climbing.

Gelsey is a magazine journalism graduate student at Medill. You can follow her on Twitter at @gelsey_plaza.