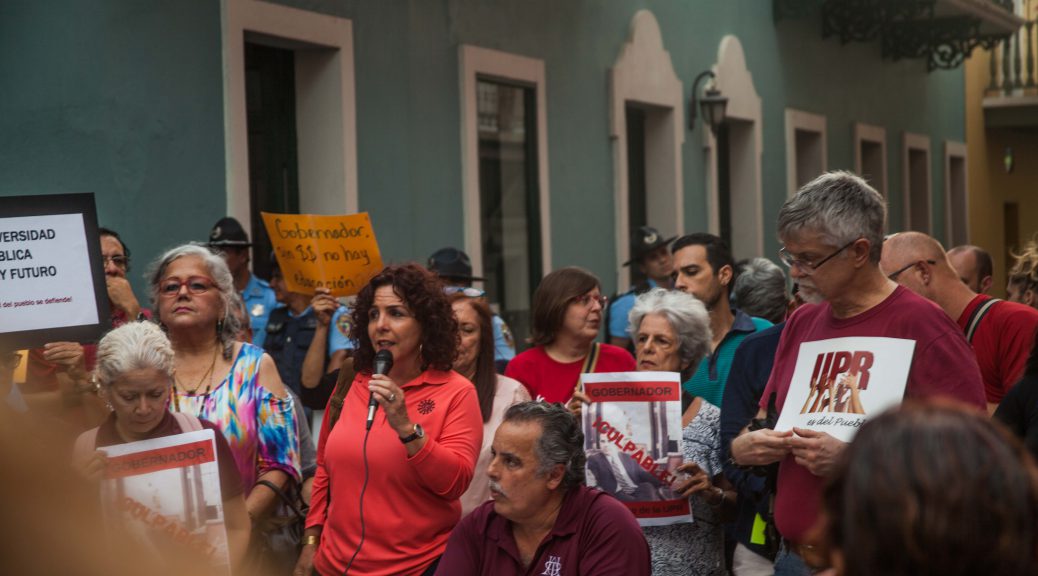 Puerto Rico remains in the midst of a massive fiscal crisis with over $72 billion in debt. To address this crisis, in 2016 the United States Congress created a Fiscal Oversight Board that was not elected through the passage of the PROMESA ACT in order to manage and reduce Puerto Rico’s debt.

The seven-member board was appointed by former President Barack Obama and includes many people from the finance and banking industries.

The board has proposed a series of austerity measures to cut funding for many of the island’s institutions. In particular, the University of Puerto Rico, with its eleven campuses across the island, has been hit particularly hard.

The university system is at risk of losing its accreditation, student tuition is increasing, and many faculty are at risk of losing jobs. On February 13, 2019, members of the Puerto Rico Association of University Professors rallied outside the governors house in Old San Juan to voice their opposition to the cuts.

Jimmy Seale Collazo, a professor at the University of Puerto Rico-Rio Piedras campus said looked at the impact of losing accreditation. “That would be an absolute catastrophe for this country,” he said. “And if that were to happen the primary responsibility for it would rest on the tenant of that house back there [the governor of Puerto Rico], together with the fiscal oversight board that was appointed without the votes of anyone here, together with the governing board of the UPR, together with the President of the UPR, and the Chancellors of the eleven campuses.”

Javier Cordova, the president of the Puerto Rico Association of University Professors, said the association still hasn’t had any response from the governor after attempts to set a meeting. “Today we’re here to send him a letter,” he said in Spanish.

Photo at top: The Puerto Rico Association of University Professors holds a rally in front of the Governor’s Mansion in San Juan to protest budget cuts due to austerity measures. (Photo by Ankur Singh/Medill)