It’s 10:30 on a sunny morning in West Humboldt Park and  time for Benjamin Kant to feed his fish. The 30-year-old entrepreneur scoops a bucket full of pellets and steps up to a five-foot tall blue tank teeming with hundreds of tilapia.

Kant raises the bucket over the open tank and fish surge to the top to gobble up the chunks of reconstituted sea protein as soon as the pellets hit the water. He grins as the feeding frenzy roils to the surface and sprays water in his direction. For the founder and CEO of Metropolitan Farms, dodging the backsplash from hungry tilapia comes with the territory of aquaponics—an agriculture system where urban farmers raise plants and fish together under the same roof.

Metro Farms opened in October, one of the newest additions to Chicago’s urban agriculture scene. The business at 4250 W. Chicago Ave. sits on a 33,000 square foot plot that formerly served as a parking lot for the Becker Dairy’s fleet of delivery trucks.

There, Kant and his business partner Shockey Funke built a greenhouse that sustains crops of lettuce, kale and about a dozen herbs, in addition to Rocky Mountain and American Blue tilapia that live in six 800-gallon tanks.

It’s all part of what Kant calls a “biological machine,” and it stands as a testament to the potential of aquaponics to become a major part of urban agriculture in Chicago and other cities with unused industrial or commercial space.
[vimeo 165350194 w=474]

Urban farmers have long used hydroponics—growing plants in a nutrient solution without soil—to produce crops in unconventional settings such as garages, basements and warehouses. Aquaponics adds aquaculture—fish farming—to the process.

In a typical aquaponics system, fish waste is captured from tanks, broken down into nitrates by naturally occurring bacteria, and channeled as a source of fertilizer for plants growing in special beds connected to the fish environment. The plants, in turn, filter and oxygenate the water, which is then pumped back into the fish tanks. The process runs continuously, forming an energy-efficient system that puts waste to productive use.

Because aquaponics doesn’t require soil and nutrients from the ground, it can be practiced just about anywhere there is space, indoors or out, for fish tanks and planting beds. At Metropolitan Farms, Kant and Funke turned a neglected concrete patch along the Chicago Avenue industrial corridor into a working farm that produces greens and fish year round in a greenhouse.

“With aquaponics we create an ecosystem,” said Kant. “It fits into nooks and crannies, and there is a lot of room for technological innovation.”

Flexible space requirements make aquaponics uniquely suited to urban settings, and bring several environmental benefits as well. According to the Aquaponics Association, this type of farming uses just a fraction of the water required for soil agriculture—about 10 percent, depending on the type of crops and climate.

In cities, aquaponics farming cuts down on transportation energy by bringing the players closer together. With producers, consumers, utilities and distributors in a tighter radius, less fuel is used for food delivery.

What’s good for the environment is also good for the bottom line. By operating close to customers, Metro Farms doesn’t have to spend as much to bring its products to market.

“Aquaponics is extremely capital intensive, but we’re cutting out the middleman and distributing directly to our buyers,” said Kant.

Once farmers make capital expenditures to get up and running, the system becomes largely self-sustaining because aquaponics doesn’t use chemicals or fertilizer and fish waste is recycled.

Repurposing waste as part of food production makes aquaponics a uniquely sustainable farming method, and it is the focus of another innovative urban farming center: The Plant Chicago.

“Businesses here produce waste, but that can fuel another farm on the site,” explained Kassandra Hinrichsen, Plant Chicago’s education and outreach manager.

She leads a Saturday afternoon tour through the Back-of-the-Yards building, pointing out to visitors all the ways that food producers located within the erstwhile meatpacking plant make use of what would normally be unwanted refuse.

Whiner Beer, a brewery on the second floor, pumps spent grain into an anaerobic digester, which converts the sludge into biogas for an electricity-generating turbine.

Fruiting Mushrooms recycles sawdust and coffee chaff to create a growing medium a Blue Oyster variety that adds a touch of sweetness to recipes at Logan Square’s Lula Café.

And algae from a shrimp farm gets processed into food for the fish in the aquaponics tanks.

The Plant’s tenants produce vastly different food products, but they all have the same attitude toward waste. To paraphrase an old saying, one company’s trash is another company’s treasure. 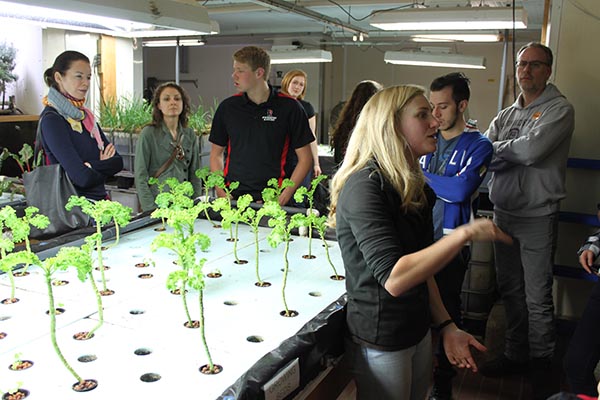 Plant Chicago’s outreach manager Karissa Hinrichsen explains how aquaponics works to a group of visitors on a tour of The Plant. (Will Racke/MEDILL)

To that end, Edel’s company Bubbly Dynamics LLC purchased The Plant’s Southwest Side home from Peer Foods, which until 2007 had used it to process pork. The building is now a laboratory of sorts, dedicated to creating “circular economies” of food production. In such a system, byproducts generated by one producer are captured and used by another, creating a closed loop cycle that, ideally, generates zero net waste.

At The Plant, finding ways to close waste loops is an obsession that extends beyond the food producers to the building itself. One highlight of public tours is a bank of meat coolers that are being converted into bathrooms and showers for the building’s workers.

A mural illustrating The Plant’s urban farming ethic overlooks outdoor growing beds. The South Side farm is located on the site of an old meat packing facility. (Will Racke/MEDILL)

Potential for farmers and communities

Metro Farms and The Plant demonstrate the how urban agriculture, especially aquaponics, can transform neglected or defunct sites into productive spaces run by local residents.

One key advantage is “the ability to make use of the small, unused, and sometimes unusable areas present in many urban environments,” noted Eric Weber, The Plant’s farm technology coordinator, in an email. “Everything from abandoned buildings or lots to building rooftops to individuals’ yards that would be otherwise growing grass.”

Instead, people can turn those kinds of places into productive mini-farms.

“The scalability in this sense is infinite, as you’re only limited by the number of these types of spaces available,” Weber noted.

Aquaponics farming, in particular, can be done by commercially-focused, large-scale growers like Metro Farms, or backyard garden enthusiasts like Dave Johnson of Villa Park.

Johnson, whose professional background is in construction, had no experience with gardening or farming aside from the few herbs he grew on a window sill. One night, while eating Tilapia for dinner, Johnson wondered if he could raise his own, since they are among the most commonly farmed fish.

Soon he was looking up aquaponics farming techniques on hobby websites and watching tutorials on YouTube. His garage became a greenhouse, complete with a 200-gallon fish environment consisting of a breeding tank and two nursery tanks.

Those fish help support an impressive variety of plants, from typical crops of lettuce and strawberries to the more unconventional dwarf oranges and lemon cucumbers.

“When you start researching, you find so many things you never even heard of,” said Johnson. “You can find plants to grow that you can’t find here [in Illinois] normally.”

Just like the Metro Farms greenhouse, Johnson’s garage set up runs all year long, so fresh produce and fish are always just steps away from the kitchen.

Johnson and his girlfriend went to The Plant’s Saturday afternoon tour to see what a larger aquaponics farm looks like and to glean some technical knowledge in case they ever want to produce larger quantities for sale.

“Right now it’s just for us,” he said. “But we can use the surplus in a farmers market, and we might scale up in the future.”

According to Weber, that kind of individual-level farming benefits local communities by fostering social cohesion and connecting food producers to their customers in ways that aren’t possible with large-scale rural farming.

“You could call it ‘citizen farmer,’ versus the large farms that exist outside of populated areas being operated by people you wouldn’t be likely to meet at the corner store,” said Weber. “Bringing the community more in touch with how the food they eat is grown is the driver behind … urban farming.”

Patience with bureaucracy and tolerance of failure are virtues for Chicago’s would-be urban farmers who want to move beyond the hobby stage to commercial production.

One stumbling block is the city’s distinction between community gardens and urban farms. Once an operation begins to sell its produce, it moves into the urban farm category and has to satisfy a host of zoning, permitting, and licensing requirements.

These regulatory hurdles, when added to startup costs, may hinder small-scale entrepreneurs without the business acumen or capital investment of an operation like Metro Farms. “We will probably see much slower growth in the commercial sector, simply due to the amount of capital required, and the convoluted maze of red tape that must be tackled currently,” said Weber.

Kant recalls having an empty site leased for eight months while he waited for the city to approve the zoning and building permits he needed to build the Metro Farms greenhouse. Once construction got a green light, there were other routine delays—meetings with baffled insurers, repeated city inspections—and freak accidents—a driver jumped the Chicago avenue sidewalk and smashed his car through the greenhouse wall, nearly rupturing a plant bed and draining the entire system.

On top of that, it took almost seven months for the Metro Farms bio system to come on line with the right balance of fertilizer and nutrients.

“It was a brutal process,” Kant said. 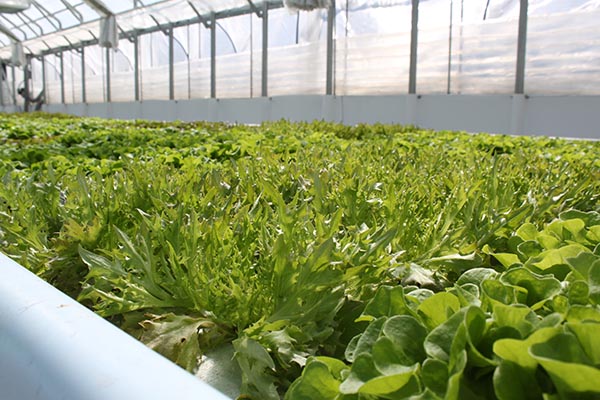 Lettuce for spring mix grows in one of Metro Farms’ plant beds. The greenhouse operation supports weekly harvests throughout the year. (Will Racke/MEDILL)

To build the complex system, Kant and Funke enlisted the help of Nelson Pade Inc., a Monticello, Wisconsin-based specialist that provides project planning, pre-fabricated systems, and grower support for home and commercial aquaponics farmers. In its current configuration, the 10,000-square foot Metro Farms greenhouse comprises three separate bays constructed of twin-wall polycarbonate. Two of the bays are dedicated to plant production and the third houses fish tanks, a packing operation and a storage cooler.

Now that it has successfully passed through a hazardous two-year startup phase, Metro Farms is focusing efforts on growth, both agricultural and financial. Kant hatched the idea for his farm while earning an MBA at UIC and is eager to show that aquaponics is a viable—and profitable—subset of urban agriculture.

“We are doing well, making money every week,” said Kant. “We’ll hit our stride in about a year. We’re trying to innovate our business model and find the right types of production and choice of crops.”

With a recent Certified Naturally Grown designation and a system capable of producing crops such as 80 pounds of basil per week, Metro Farms is already in the vanguard of Chicago’s urban farms.

Photo at top: A variety of herbs and lettuce grow inside the greenhouse at Metro Farms. The custom plant beds connect to fish tanks via a network of pipes, valves and pumps that circulate water between both growing environments to fertilize the plants and filter the water. (Will Racke/MEDILL)