Next-generation solar cells might power personal electronics such as watches and backpacks that could recharge your cell phone.

These solar cells are being tested and prototyped in a research hub launched this year by the Institute for Sustainability and Energy at Northwestern University.

The ISEN research hub, named Glovebox Inert Atmosphere (N2) Thin-film Fabrication and Testing or GIANTFab, allows academic and commercial users to explore new materials for solar cells in a set of connected and airtight glove boxes that eliminate air interference. The goal is to find more efficient alternatives to expensive and rigid silicon solar cells, a game-changer for solar energy.

The GIANTFab is the only publicly accessible user facility in Chicago that offers a one-stop solution for users to both build and test solar cells without the interference of the air, said Nathan La Porte, ISEN’s Operations Director of the GIANTFab. 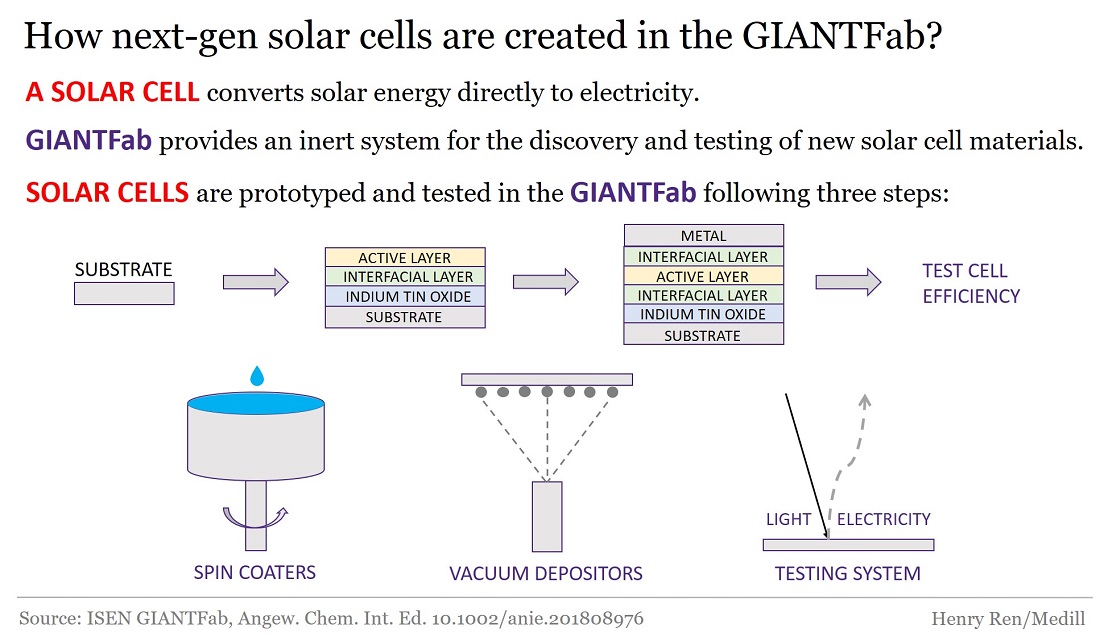 Solar cells are devices that convert solar energy directly into electricity using photovoltaic materials. Silicon solar cells have already been widely used in commercial products, while cells with organic and perovskite compounds have gained an increasing research interest due to their lighter weight, greater flexibility and lower manufacturing costs. These two research materials are not widely commercialized as yet.

However, even a short exposure of the new types of solar cells in the air can cause a loss in their efficiency, as the test cells are not sealed in devices and are sensitive to oxygen and moisture exposure.

“The bottlenecks of organic and perovskite solar cells are their efficiency and stability. Once they are removed, mass production will not be a problem,” said Wei Huang, an optoelectronics researcher at Northwestern University. Huang works at the research group of Tobin Marks, a Northwestern chemistry professor.

“That’s why we need to use the GIANTFab facility,” Huang said. The airtight glove boxes allow him to get real efficiency data by preventing raw solar cells from being degraded in the air.

Huang predicted that these solar cells could be widely used in commercial products including watches, wristbands, backpacks and clothes in years to come. These tiny and bendable cells can be as printable as paper and even charge your phone batteries in the future. They are expected to be cheaper than silicon solar cells.

Users like Huang can coat different layers of solar cells with the GIANTFab’s spin coaters and vacuum depositors to try out different layering of materials. That allows researchers to determine which combinations of layers work best. The thickness of one layer can be controlled to one-tenth of a nanometer by vacuum depositors, while a solar cell overall can be as thin as one-millionth of a meter above its base.

Users can then store their cells in glove boxes or test their cells with the testing systems. All systems are interconnected through chambers.

“The core facility frees researchers from the time-consuming job of maintaining their own equipment, allowing them to spend their time developing new materials and technologies to advance the cutting edge of science,” La Porte said.

The GIANTFab is open to all users from 8 a.m. to 6 p.m. on weekdays, but reservations are needed. Students and staff at Northwestern University, the University of Chicago and the University of Illinois at Chicago can use the spin coaters, vacuum depositors or testing systems at $35 per hour, while other academic and commercial users pay at $52.50 and $70 per hour, respectively.

Photo at top: Joaquin Alzola, a graduate student of the Wasielewski Group at Northwestern University, uses the spin coater at the Glovebox Inert Atmosphere (N2) Thin-film Fabrication and Testing core facility. The facility was launched in January by the Institute for Sustainability and Energy at Northwestern University to power the research of the next-gen solar cells. The Wasielewski Group is led by ISEN Executive Director Michael Wasielewski. (Nathan La Porte/ISEN)