After years of delays and false starts, the crumbling Western Avenue overpass in Roscoe Village is under demolition, but some area businesses are worried their shops will come down with the bridge.

The 17-month and $26 million reconstruction of the overpass kicked off Tuesday with its permanent closing. Upon completion in 2017, the intersection of Western, Belmont and Clybourn Avenues will be transformed into a grade-level intersection designed to improve traffic flow and pedestrian walkways along this pivotal stretch of Western Avenue. 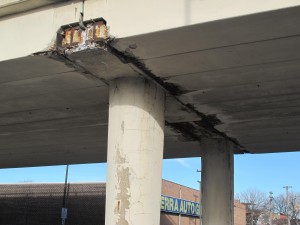 The Western Avenue overpass opened in 1961 and has remained in use beyond its safe lifespan. (Siri Bulusu/ MEDILL)

Starting Friday at 8 p.m., there will be a three-day full closure of Western Avenue from Nelson to Roscoe and at the intersection with Belmont and Clybourn Avenues, which will reduce the total time of the project by one month, according to a spokesperson at the Chicago Department of Transportation.

In order to avoid the condensed lane space during the remainder of construction, CDOT is advising motorists to avoid Western Avenue between Diversey and Irving Park. This diversion of traffic could negatively impact small businesses located within the construction zone.

“We’re still in the first week right now and traffic is already backed up,” said Bob Bothur, owner of Soundz Good, a car electronics shop in the 3400 block of Western.

Bothur said “if he makes it through the year,” he looks forward to the re-pavement and median work that will improve safety and traffic outside his storefront. However, his business is still recovering from a sewer line replacement last summer that took CDOT twice the estimated weeks-long period. 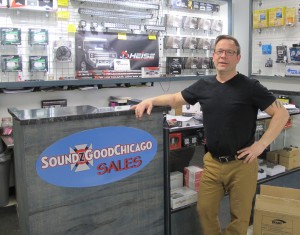 “It’s inevitable and I can’t control it,” said Bother, adding that he is not crunching any numbers to predict how the upcoming project will impact his business. “I’m stuck between a rock and hard place. Sometimes ignorance is bliss.”

Another business coming to terms with the Western Avenue reconstruction is Bothur’s neighbor, Keep It Clean car wash.

Manager Jose Tiscareno said last year’s construction affected the business “traumatically” with an estimated 70 percent decrease in revenue during the summer. Now facing a 17-month project, Tiscareno is bracing for another serious downturn.

“We won’t go under but business will go down,” Tiscareno said. “With that wall to wall traffic, of course it’s going to have an impact.”

Tiscareno said that on a good day, the car wash services 100, but with side streets taking on the burden of lane closings, he doesn’t anticipate customers sticking around two or three times the usual wait.

“We don’t get any foot traffic. People have to bring their cars in,” Tiscareno said. “Hopefully, once they open two lanes back up, we’ll bounce back. We have loyal customers. ”

Bothur also believes in his loyal customers and is taking steps to ensure he makes accessing his business as easy as possible.

Bothur said it’s imperative he informs his customers that he’s doing the best he can.

“I have my Web guy creating a route map for our site,” Bothur said. “We’re also advertising free valet parking. If people call before they get here, we can be outside waiting for them.”

Keep It Clean, which has been operating for two years, is also developing special deals including a VIP program that will keep customers coming regularly. But if traffic problems cause numbers to drop substantially, Tiscareno worries he may need to cut staff in half.

“If there isn’t enough work to do, it affects everybody,” Tiscareno said. “I’m sure it’ll look nice and everything, but we have to deal with it now.”

A spokesperson at the Chicago Department of Transportation said that building an intersection at grade will “re-establish the fabric of the neighborhood grid and create new opportunities for economic development and job creation in this northwest side area that borders on Lakeview and Roscoe Village.”

Bothur said in an attempt to keep a positive outlook, he’s focusing on the future prospects of Roscoe Village after the construction is complete.

“Two years from now, we’ll look back and think maybe we should’ve done this or that, but there is nothing we can do,” Bother said. “In two years it’s going to look great, everyone is going to do great. It’s just a matter of squeaking by in the meanwhile.”