Stericycle Inc. (NASDAQ: SRCL), the Illinois-based world’s largest provider of regulated medical waste management, reported higher profits in both the fourth quarter and the year 2014 due to its successful acquisition strategy.

On an adjusted basis, which excluded elements such as acquisition and restructuring expenses, the company earned $1.12 per diluted share, up from 99 cents per diluted share, in the year-earlier quarter, equalling the consensus estimate of $1.12 by 16 analysts. 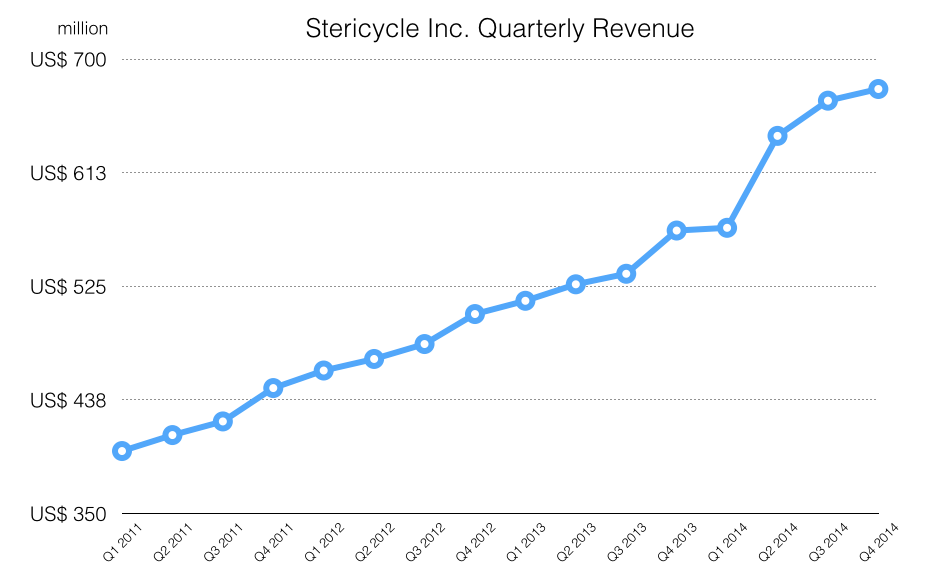 Acquisitions greatly contributed to Stericycle’s fourth-quarter and full year performance. “In the quarter, we closed nine acquisitions, five domestic and four international. The revenues from the nine acquisitions were $7 million in the quarter and annualized approximately $43 million,” said Brent Arnold, chief operating officer of Stericycle, in the conference call. According to the press release, combined with previously completed acquisitions, total  acquired revenue growth was $93.1 million in the fourth quarter.

“In 2014, we expanded our international operations completing 27 acquisitions in 10 countries including a new geography — South Korea,” Arnold said.

Al Kaschalk, analyst at Wedbush Inc., said because the majority of the acquisitions were executed internationally, volatility in foreign currencies became an inevitable factor influencing Stericycle’s earnings. In the press release, the management stated that there was unfavorable foreign exchange impact of $17.0 million in the fourth quarter and $33.6 million in the full year.

For 2015, Stericycle lowered its expectation of diluted EPS to $4.63 to $4.69 per share, to account for the foreign-exchange impact. According to William Blair & Co.’s estimation, currency is expected to reduce total 2015 revenue by about $70 million.