Panic crept in as Airbnb host Samuel Szobody lost $48,000 worth of guest bookings in the two weeks that followed Illinois Gov. J.B. Pritzker announcing a statewide lockdown on March 20.

“From April through June, all my calendars just went completely empty,” he said.

Szobody manages nine Airbnb listings in the Chicago suburbs including Aurora, Schaumburg, St. Charles and Waukegan. Like many other Airbnb hosts, he rents houses from landlords, furnishes and sublets them on short-term rental platforms such as Airbnb, Vrbo and Booking.com.

Instead of lowering the price to attract short-term renters, Szobody raised the price to up to $300 a night but offered a 15% monthly price discount for his five-bedroom Schaumburg house. He even encouraged travelers who booked before the pandemic to cancel their short-term stays by offering full refunds which allowed him to have guests seeking month-long stays, he said.

“We have a huge opportunity to host people for the long term,” Szobody said. “I’m doing long-term booking only.”

As short-term Airbnb renters curbed business and vacation trips after the pandemic hit, suburban Airbnb hosts like Szobody pivoted to long-term renting to make up for the loss. An average guest now stays for more than a month in his rentals compared to a previous average of 2.5 days.

While travelers tended to avoid Airbnbs in March in the city of Chicago, an early hot spot of coronavirus infection, suburban and rural Airbnbs in the greater Chicago area thrived. According to AirDNA LLC, a market-research firm that analyzes Airbnb bookings, Airbnb revenues in March doubled year-over-year in Michigan City, Indiana, and tripled in Waukegan, Illinois, while Chicago shrank 11%.

“Travelers [were] fleeing urban centers and heading towards homes just outside the city,” an AirDNA report on non-urban short-term rental markets wrote. 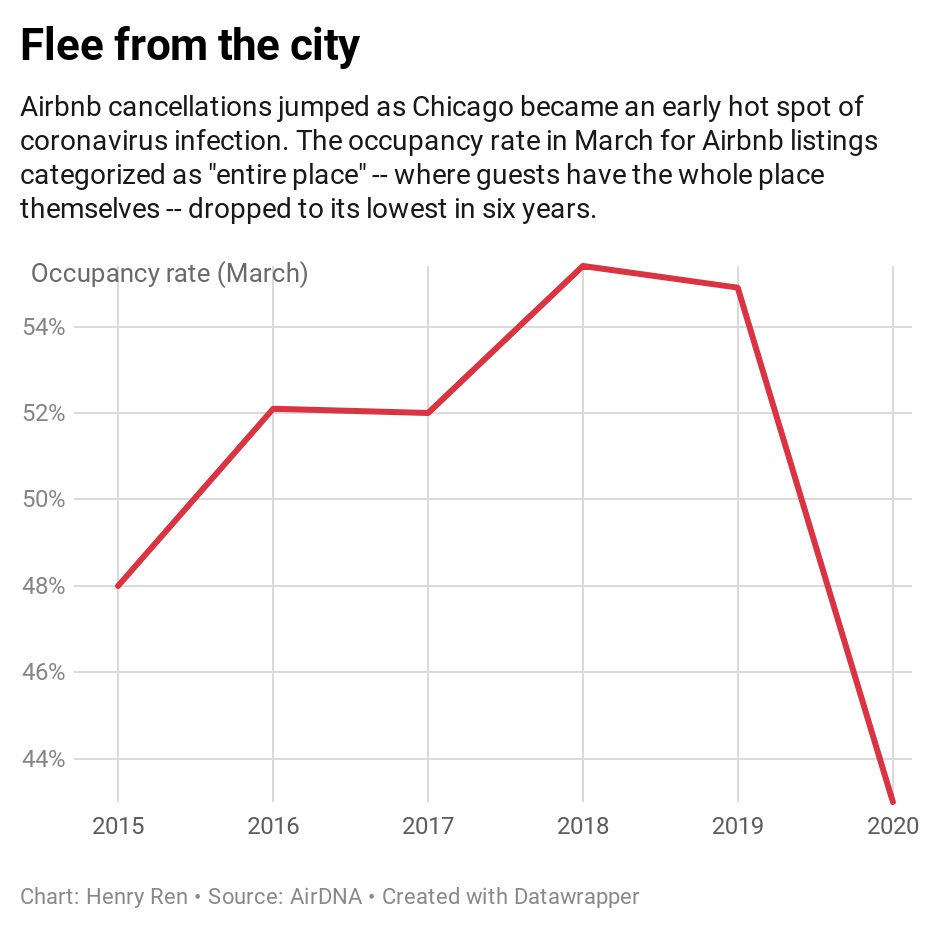 Junqing Qiao, a doctoral candidate at Massachusetts Institute of Technology, fled from his student apartment in Boston in late March, fearing the coronavirus might spread through the apartment’s central air conditioning system. He spent the last two months in a lakeside Airbnb chalet close to North River, New York.

“I don’t see any people from the three-story chalet,” Qiao said. “It’s happy though lonely to stay in a rural Airbnb.”

Szobody was prepared to host urban travelers like Qiao who sought shelters to hunker down in the midst of the pandemic. He stocked houses with six-month supplies of toilet paper and cleaning products.

Szobody purchased an ozone generator with UV light filtration for every one of his Airbnbs. Installed on a smart outlet, the ozone generators can be controlled remotely on Szobody’s electronic devices. High levels of ozone will be used for 12 hours to kill microorganisms after a guest checks out, he said.

“We did everything we could to make our homes into ‘safe havens,’” Szobody said.

With supplies stocked and ozone generators ready, Szobody’s nine houses are fully booked until July. The occupancy rate of his suburban Airbnb portfolio increased from 70% before to more than 85% in June, he said, which means his Airbnbs are empty three out of 20 nights versus three out of 10 nights prior to the pandemic.

Apart from shelter seekers, Szobody was called by house insurance adjusters who want to move clients into Airbnbs for months while fixing their homes.

Ousama Issa has stayed at Szobody’s Schaumburg house since April 19. The house is the third accommodation that Issa’s family of four has resided in since State Farm started investigating a leaking roof at Issa’s home in December 2019. As the pandemic prolonged the fixing process, the family extended the stay at Szobody’s Airbnb until July, Issa said.

Short-term rental marketplaces like Airbnb are winning new customers like insurance adjusters because most hotels are closed during the pandemic, Szobody said.

“When hotels come back online, insurance adjusters are going to stick with short-term rentals because they offer better amenities for customers at a lower price,” he said.

Although the long-term renting discounts dragged Szobody’s revenues down 20% in April from pre-pandemic predictions, Szobody profited about $10,000 in April because costs dropped 40%. Cleaning costs fell as Airbnbs do not need to be cleaned during longer guest stays, Szobody said.

Alex Khokhari, Szobody’s co-host and housekeeper, said he cleaned once or twice per house in April, compared with about 10 times per house before the pandemic.

To retain five part-time housekeepers, Szobody pays them for one housekeeping visit per week for bookings of more than 14 days.

“If my business is covering its costs, it’s not right for my housekeepers to be suffering,” he said.

“Domestic travel is not really likely to bounce back for at least the next three to six months,” said Makarand Mody, an assistant professor of hospitality marketing at Boston University. “While travelers are away, the only way that Airbnb hosts can still make money on their properties is by putting them on the medium- and long-term rental market.”

To win customers during and after the coronavirus lockdown, Chris Anderson, a Cornell professor of service operations management, said Airbnb hosts need to have facilities that make social distancing easy.

“What’s going to do well for Airbnb [guests] is a mix that provides safety, security, comfort, distancing and sanitation,” he said.

Anderson’s comments were echoed by Szobody, who is looking for property owners in the Chicago suburbs to fill all the long-term renting inquires.

“If short-term rental businesses are able to pivot, and if they are able to create safe, sanitized and stocked spaces for people to stay in and offer big discounts for [stays of] 30 days or more, they will be profitable again,” he said.

Photo at top: The five-bedroom Schaumburg house that Samuel Szobody rent to the family of Ousama Issa. After the pandemic hit, Szobody raised the price per night but offered large monthly discounts to attract long-term renters. (Courtesy of Samuel Szobody)