The hands of the Doomsday Clock moved to 100 seconds to midnight on Thursday, indicating that the world is closer to catastrophe than ever since The Bulletin of Atomic Scientists debuted the symbolic clock in 1947.

The Bulletin announced the move to 100 seconds from a mere 2 minutes to midnight in the annual resetting of the clock based on the threats of nuclear disaster, climate change and disruptive technologies.

“We now face a true emergency — an absolutely unacceptable state of world affairs that has eliminated any margin for error or further delay,” said Rachel Bronson, president and CEO of the Bulletin. 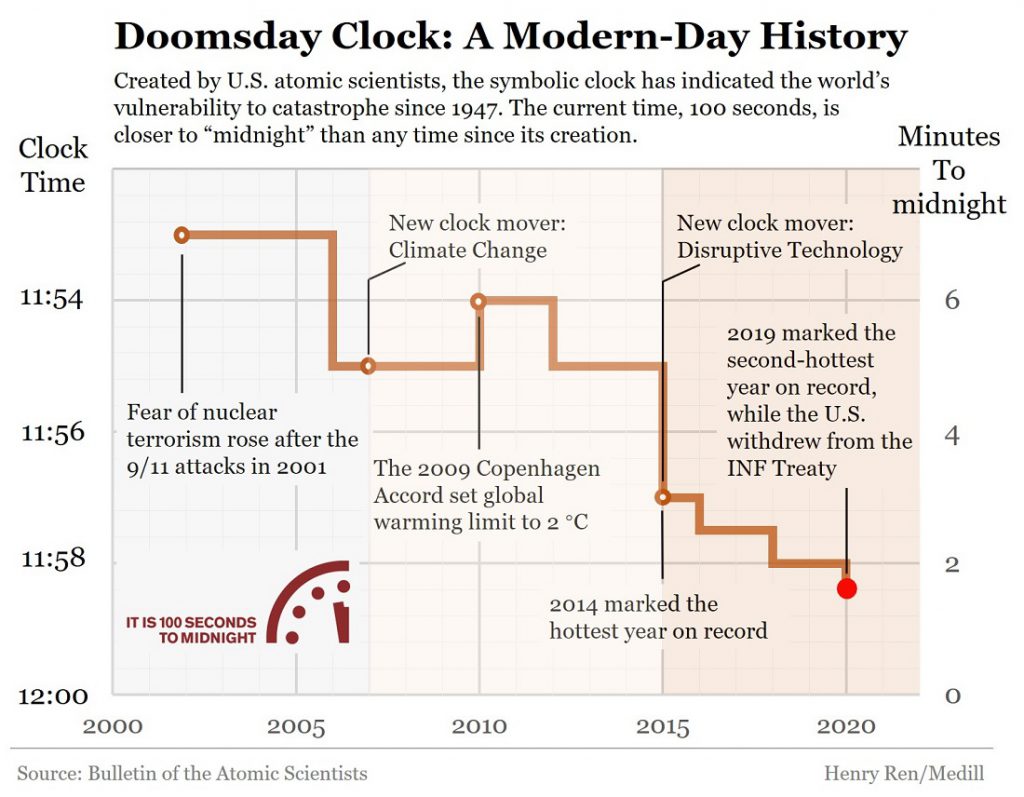 Created by U.S. atomic scientists in reaction to the development of nuclear weapons, the Doomsday Clock has served as a symbol for proximity to a human-caused global catastrophe since World War II. The clock never veered closer than the “two-minute warning,” even at the height of the Cold War. That changed Thursday.

The worsening threats of nuclear war and climate change are the main clock movers, according to a statement issued by the Bulletin.

The U.S. withdrew from the Intermediate-Range Nuclear Forces Treaty with Russia in August, while the Trump administration dismantled the Obama-era Iran nuclear deal and heightened tensions with the assassination of Iranian General Qassem Soleimani.

The year of 2019 was also the second-warmest year on record behind 2016, capping the warmest decade on record, according to the National Oceanic and Atmospheric Administration.

“At the time when world leaders should be focused on clear and present dangers of nuclear escalation and climate emergency, we are instead witnessing denial, disregard, and dangerous brinkmanship,” said former U.N. Secretary-General Ban Ki-moon.

“The dangers that we talked about last year are still all there, and in fact, they are getting worse,” said the Bulletin board member Herbert Lin, a cybersecurity expert at the Hoover Institution of Stanford University.

Meanwhile, the institutional structure for dealing with these problems is being attacked and dismantled, making the nuclear and climate threats more difficult to cope with, Lin added.

In the statement, the Bulletin claimed that the nuclear arms control boundaries and the environmental policies in the U.S. and Brazil are also being dismantled.

In reaction to the Bulletin announcement, Richard Alley, a geoscientist at Pennsylvania State University, said climate change is pushing us toward a threshold where human systems fail, though the climate changes in slower motion than imminent threats.

“When a climate-related problem happens, a stressed, unhealthy and non-resilient society sometimes breaks,” he said, “More progress needs to be made.”

The Bulletin leaders also stated that nuclear and climate threats are now compounded by the misinformation on digital platforms, another existential threat to the civilization in the long run, according to Lin.

Lin said the new information environment is replacing civilized discourse with rage and fantasy. To solve the problem, Lin argued,  social media companies should understand and change their roles in spreading misinformation.

Daniel Holz, another board member of the Bulletin, said the latest setting of the Doomsday Clock is a “wake-up call.”

“The science is so well established. The question is action,” the  University of Chicago astrophysicist said.

He encouraged ordinary people to “agitate for change” by being politically engaged, reducing carbon footprints, going to climate protests or contributing to organizations.

“Everything matters,” he said.

In an op-ed published on the Wall Street Journal on Wednesday, former Bulletin board member and theoretical physicist Lawrence Krauss wrote that “it’s time to retire the clock.”

“‘Atomic scientists have no special authority when they opine on politics or military strategy,” Krauss wrote.

However, Lin rebutted the idea. He said the Bulletin and scientists should be concerned with policy issues that are embedded with “a strong scientific component.”

“Scientifically informed judgment and reasoning are important parts in solving the problem,” he said.

Holz said the Doomsday Clock acts as a tool to help build the public awareness of the threats to human existence. Understanding and appreciating the problems, he said, is the first step.

“The notion that we would give up on this powerful symbol is tantamount to just giving up the planet,” Holz said.

Photo at top: Former California Governor Jerry Brown (left), former President of Ireland Mary Robinson (middle) and former U.N. Secretary-General Ban Ki-moon (right) unveiled the latest setting for the Doomsday Clock at 100 seconds before midnight Thursday at the annual event organized by the Bulletin of Atomic Scientists. (The Bulletin of the Atomic Scientists)
Share on facebook
Share on twitter
Share on linkedin
Share on print