The Cubs are on a winning streak. What now?

Rookie powerhouse Kyle Schwarber has hit 3 home runs this postseason while the team slugged a total of 15. The Cubs easily dispatched the Cardinals in four games, and the club is preparing to play either New York or Los Angeles in the National League Championship Series.

Blame it on curses or blame it on nerves, the Cubs more often miss as a clutch baseball team. It’s the sad history of choking in the playoffs.

There was the September collapse during 1969 season. The ground ball that squeaked past Leon Durham in the 1984 playoffs. 1989, 1998, Steve Bartman, the list goes on.

All of these moments have fed the mythology of Cubs torment—moments of postseason failure that linger and leave fans shaking their heads and asking what happened. Some attribute this to a Bill Goat Tavern owner Billy Sianis, who hexed the team for kicking him and his billy goat out of Wrigley Field during the 1945 World Series.

So, billy goat curses aside, what did happen? Can science tell the team anything about avoiding the mistakes, fumbles, and chokes that have plagued the club in the postseason for near a century?

Neuroscientists that study the psychology of choking and brain activity during competitive play do offer some answers for plagued ball teams. The advice actually sounds like a pep talk from a high school coach calming the nerves of his team before a state championship.

It is all about framing, according to Vikram Chib, who studies the psychology of competition at John Hopkins University School of Medicine. He said the Cubs need to focus on playing well over an entire series rather than focusing on the pressure of one play or one game.

Chib researches the science of choking—a stress response that impairs, judgment, muscles and confidence. He has proved that the response exists—and how neurological responses, money, and pressure affect performance. He is interested in how people are impacted by what he calls “incentives,” which could be money (financial incentive) or crowds (social incentive).

Chib is picking up conversation started by psychologist and Nobel laureate Daniel Kahneman, who argues that people are motivated more by the fear of losing than by the hope of gaining anything. To use a Kahneman lens, the Cubs lose in the playoffs because the stakes are higher and choking effect ripples through their play. So it’s not because of the billy goat curse.

Last year, Chib organized a study, published in The Journal of Neuroscience, on individuals playing a complicated video game. After learning how to play, the participants were given $100 and placed inside an MRI machine. Before the game, they were told that they were either going to win or lose some amount of money, and Chib monitored the participants’ brain activity while they played. 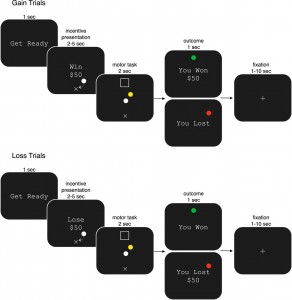 An active ventral striatum—the ‘reward center’ of the brain—can signify a heightened ability to perform. Chib found that activity in this part of the brain decreased as the stakes were increased.

People perform better when more money is on the line “only up to a point,” Chib said. Beyond this point the “larger incentive” will only decrease performance, “a phenomenon known as ‘choking,’” he wrote in the journal article.

No doubt, the Cubs have more financial incentive to win in the playoffs than any average person would know what to do with, but the more relevant aspect of Chib’s research is what he calls the social incentive.

Got that? Think about it this way. When Jake Arrieta first took the mound at the beginning of his dominating 4-0 win over the Pirates to advance to the National League Division Series, he was thinking about the crowd. (This is true, the Cubs pitcher tweeted out to his fans, “Bring out all the reinforcements. I need it LOUD.”)

David. Bring out all the reinforcements. I need it LOUD. https://t.co/vxhbjNVqBm

Chib would argue that this internal thought process, Arrieta thinking about the crowd and how it might perceive his performance, can impact his pitching.

“That’s where it gets complicated,” Chib said, “Because it’s not just thinking about losing the game and money; it’s, man, these fans really want it—If I lose it, it’s horrible.”

That means that Arrieta and crew are going to be thinking about the crowd, the curse, the money, and all of it combined; stacked like the bricks of Wrigley Field.  Studies  show that increased social pressure can make a player perform better, but—like Chib’s financial incentive study—only to a certain point.

Cubs fans know what happens here, but where is the tipping point?  “We are still trying to figure that out,” Chib said.

Does he have any advice for the team? Chib said the Cubs players need to focus on “the entire portfolio of performance over the series” and not losing one individual game. Take investing,” he said. To shake off the anxiety of high-stakes decisions, a trader should think about all of the different investments rather than about making one specific decision.

Sullivan interviewed top litigators, soldiers, athletes (including Woods) to determine what makes a clutch player, and he compiled all that research into a book, “Clutch: Why Some People Excel Under Pressure and Others Don’t.”

He writes that performance players have a combination of presence of mind, discipline and a desire to succeed  – without a fear of failing, which mirrors Chib’s idea that competitive players need to change how they frame an event.

But for the Cubs, Sullivan is not so sure staying focused and present can help the team. When asked by this reporter to give some playoff advice to the Cubbies he tweeted, “Is it pressure or that old Billy Goat curse?”