Alderman George Cardenas (12th) and public health advocates are moving along a proposal for a penny-per-ounce sugar sweetened beverage tax in Chicago, despite disinterest from Mayor Rahm Emanuel.

But opponents warn about job cuts and an added pinch on budgets that will hit lower wage earners the hardest.

A penny-per-ounce tax is volume based and would apply to all sugar sweetened beverages—any drinks that have more than 5 grams of sweetener per 12 ounces (which would be a 12-cent additional tax). It is informally referred to as a soda tax, though it exempts diet sodas. Such a tax has been adopted in Berkeley, California and Mexico, though proposals have also failed in many cities around the U.S.

Advocates say that this tax will allow the city to dissuade sugary beverage consumption, and at the same time, reap money from consumers to potentially fund education or public health.

“I think it’s one of those health crises that needs leadership and a strong coalition of folks who really care about this issue,” Cardenas said.

Jim Soreng, executive director of the Illinois Beverage Association, said that a new tax would not only cut jobs in beverage industries, but also in an array of manufacturing jobs, like plastics and aluminum. Moreover, restaurants that make a large portion of their profit on beverages could also see a loss.

“This is about people in your neighborhood,” Soreng said. “You end up paying more in taxes than you would for the actual product.”

According to Harvard School of Public Health, people who regularly consume sugary drinks have a 25 percent increased risk for developing Type 2 (adult onset) diabetes. They are also at a higher risk for heart disease. However, there is little disagreement over whether soda is harmful; massive sugar consumption is known to take its toll. Advocates and those opposed disagree more broadly on the best ways to go about changing the public habits.

Soreng said IBA is making its own strides toward influencing healthier habits. He pointed out that IBA successfully worked with local and state industry leaders to offer healthier drink choices in vending machines in schools and city buildings. On a larger scale, the beverage industry paired with the Alliance for a Healthier Generation with the aim of reducing beverage calories for an average consumer by 20 percent by 2025.

“Companies find you can do more through partnership than through taxation,” Soreng said.

There is also the question of whether a soda tax will actually make people consume less soda, and whether people will make healthier choices or just substitute the a soda with sweet foods, such as ice cream.

Frank Chaloupka, a health economist at University of Illinois at Chicago, and his colleagues conducted a 2013 study on the relationship between sales taxes on sugar sweetened beverages, buying patterns and weight. The study is part of a longer, ongoing research project on soda taxes.

“If you have a tax that’s comprehensive on SSBs, you see something like a 24 percent reduction in consumption,” Chaloupka said. He added that a penny-per-ounce tax is near the level of taxation where behavior change is really observable.

The study also measured other dietary trends to see if consumers were just shifting unhealthy habits onto another food vice. “There is substitution, but it is not going to be complete substitution. At the end of the day you do get real reductions in caloric intake and weight,” Chaloupka said.

Some communities have greater barriers to healthy habits and lowering soda consumption than others, which are often linked to income and food deserts.

“When you look at the rate of diabetes, obesity, heart disease, and some cancers related to obesity, African Americans continue to disproportionately represent,” said Malik Nevels, executive director of the Illinois African American Coalition for Prevention.

Bukola Bello, lobbyist for the American Heart Association and the Illinois Public Health Institute, said that increased risk for these diseases often has to do with opportunities as well as choices. For example, if someone lives in an area without a nearby grocery store—a food desert—they may be more likely to shop at a convenience store or buy soda, since they don’t see healthier options within a reasonable distance from their home. Advocates for the tax, like Bello, often contend that if soda is more expensive, healthier choices will seem more within reach. 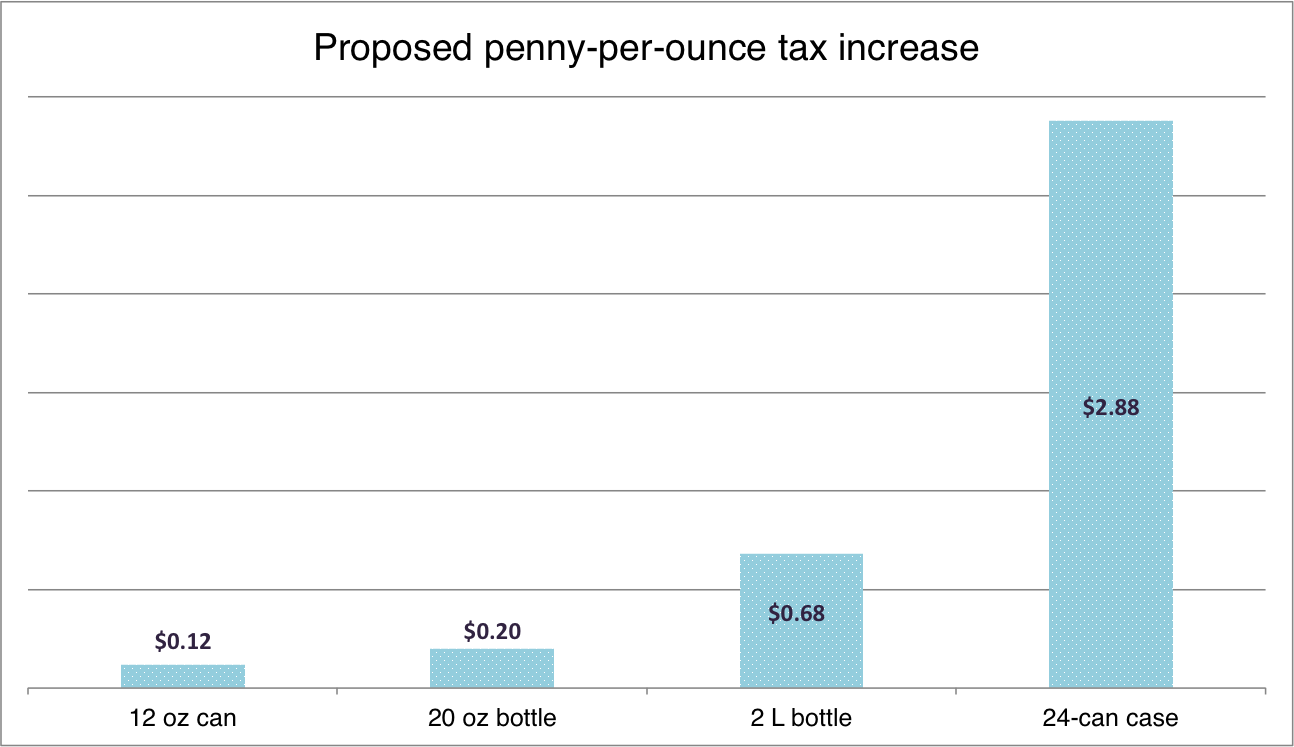 “We are hoping that in that regard, we will be able to elicit a response that will affect behaviors directly, similar to tobacco and smoking,” Bello said.

“We are going to continue to educate community residents about the importance of passing this tax and we are going to work with city council members, particularly black caucus members, to educate them about how sugar and soda are really damaging our communities,” Nevels said.

Others believe that changing people’s habits should not be at the hands of city government nor the beverage industry. Baltazar Enriquez, vice president of the Little Village Community Council, said in a low-income community, such a tax would be a burden on residents financially, as well as culturally.

“In the Latino community, Coca-Cola is a big factor when we sit down to eat. It’s part of our culture to drink something refreshing,” Enriquez said. He added that taxing soda would not halt soda consumption, but costs will just add up until there is “no room to breathe.”

“It’s not like we are defending Coke or Pepsi or anything, it’s just not fair,” Enriquez said.

Cardenas says that a tax will be most beneficial if paired with educational programs on nutrition and the effect of soda on the body. Moreover, such educational efforts could be funded, at least in part, by money accumulated from such a tax.

Soreng said that enacting a soda tax is unlikely, as Cardenas has been pursuing a proposal for years with no results thus far.

Soreng and the IBA have their own network of support both at the city and state level. In reaction to a possible soda tax, the IBA formed the Chicago Coalition Against Beverage Taxes. Their website lists over 1,000 businesses and groups opposed to the tax. While the list is mostly restaurants and stores, it also includes many chambers of commerce. Moreover, 25 community councils, religious organizations and nonprofits signed on, including the Little Village Community Council (Enriquez’ group).

“I told the lobbyists in the industry, you will see a tax eventually,” Cardenas said.

Photo at top: Soda, along with other sugar sweetened beverages, could see a penny-per-ounce price increase if a tax proposal moves forward (Amanda Koehn/Medill)