Tommy John of the Los Angeles Dodgers took to the mound in 1977 like he did hundreds of times in his career. But this time would be different — early into the game he felt a sharp pain in his elbow.

“I hurt my elbow in the second or third inning … and the rest is history,” John said.

John tore his ulnar collateral ligament in his pitching elbow and the injury would require surgery. The surgeon who operated on him was Dr. Frank Jobe, who created the procedure to reconstruct the ligaments in the elbow. Jobe’s technique was the first of its kind and it spread with the name Tommy John surgery.

While surgery remains a popular choice, the surgery has evolved with a procedure that inserts a brace inside the elbow and cuts the rehabilitation time in half. But a holistic rehabilitation approach is also available,  developed by Tommy John’s son Dr. Tommy John, who practices in San Diego,. That can bypass surgery.

In the final year of the five-year study, Dr. Marcus Rothermich, a surgeon and researcher at Andrews, is noticing a trend in the different surgeries that college athletes are getting. These went largely unnoticed because “nobody had ever looked at college,” he said.

Before Rothermich and his medical partner Dr. Jeff Davis started doing research, initial data showed that roughly 20-40 Division One college baseball players had Tommy John surgery a year. Rothermich and Davis thought that the number had to be low.

As a result, Rothermich asked athletic trainers at all of the Division One baseball teams in the U.S. to see who had the surgery. A total of 296 out of the 299 schools responded and the data has shown that baseball players are opting for the UCL reconstruction, the same surgery Tommy John had, is decreasing.

The reconstruction replaces the tendon in the elbow and the rehabilitation time requires between 12-18 months. In the last few years, a new surgery became a choice for college students and pitchers, allowing them to be back on the mound in six or seven months instead of 12.

A second finding, however, shows that the initial data about Tommy John in college baseball players was incorrect. From the surveying of athletic trainers, a total of 230 surgeries were reported in Division One baseball players in a 12-month period from June 2018 through May 2019.

“It’s 18-19 year olds who are coming in from high school with blown out elbow surgery,” he said.

One of those 18-19 year olds was Ryan Kutt. Kutt, an Orland Park native and a red shirt sophomore at University of Illinois, where he pitches for the baseball team. He had Tommy John surgery in August 2018, when he was almost 20.

“I knew something was wrong at the end of senior year when my elbow started to hurt,” he said.

Kutt made up his mind that he was going to play through it his freshman year at college and was able to manage the pain. He was able to get into a groove that allowed him to play his best, Kutt said. But the pain never went away and because Kutt is a pitcher, he would feel the pain every time he was on the mound.

Pitching can cause a lot of pain at the joints and with the mechanics of pitching pain was inevitable. One of the phases in pitching called cocking, when the pitcher brings the ball back, creates the maximum amount of torque on the elbow and the part where the elbow is stressed the most.

Leading up to the date of his surgery he was playing baseball in the Northwoods League and noticed a couple things about his pitches. His velocity started dropping, he was losing control of the ball and the pain got worse.

“I got the MRI and they didn’t see a tear but they saw a lot of swelling and flew me down to see Dr. [James] Andrews,” he said.

Kutt was in Florida for a few days and he got the surgery. Roughly six and a half months after, Kutt picked up a baseball and started playing catch. About 12 or 13 months post-op, he was on the mound pitching again. Kutt got the Tommy John surgery because of the pain in his elbow and how it was affecting his pitching. Roughly nine months post-surgery, he felt no pain.

“For the most part it feels awesome not to have soreness anymore,” he said.

Coaches and athletic trainers at Illinois wanted Kutt to take his time rehabbing his elbow because they wanted to get it slow and right. Kutt hoped to be back on the mount for the 2020 season but, due to COVID-19, the season was cancelled. Luckily, the NCAA restored another year of eligibility to Kutt and his teammates so finally next spring, Kutt can take the mound after getting Tommy John surgery.

Surgery is a common option for repairing the UCL, but there is one doctor supporting and leading the charge for a different approach. This could be beneficial to all patients who may be considering Tommy John surgery and especially for kids as young as 12 who may be facing it .

“Are they up for the work, discipline and lifestyle change,” said Dr. Tommy John, son of baseball player Tommy John.

TJ, as he is often called, worked with kids and their families in the Illinois suburbs on baseball performance. He is also a doctor who works with young athletes, the elderly and even the Chicago Bears. While he was working with his older patients he noticed something peculiar about the youth injuries.

“There were other athletes coming in from all sports, experiencing adult injuries as kids and that’s when I was like okay something’s terribly wrong with the entire system here,” he said.

John said he felt he was monetizing the problem of injuries in youth sports and he wanted to change it. He put his home for sale and went back to chiropractic school. Now he has his own practice where he works with people on rehabilitation and proper healing from injury.

Surgery can be a traumatic event on the body from, from undergoing anesthesia to the actual surgery to rehabilitation. If a baseball player were to get surgery, they would be out of the game for maybe one or two years. Instead of surgery during that time, Dr. John helps athletes and families “work with nature”.

In the years they would be preparing and recovering from surgery,  John advises people and parents of young kids to take time off from the sport, especially if the ligament is partially torn. He looks at nourishment, stress, sleep habits and physical therapy or other  movements while the kid takes time away from baseball.

“But are they up for the work, discipline and lifestyle change?” he said.

After a few years, they would be stronger and could return to the mound. John has patients where the time away has worked. A lot of parents think his method of healing is “antagonistic,” though.

He tries to communicate with parents about the importance of time away from baseball, proper meals, stress management and even the importance of playing multiple sports. Even if surgery remains necessary “you are going to be those things -eating better, rehabbing, and taking time away from baseball anyway,” he said. The difference in his method is that kids won’t get cut if parents stick to the plan.

But, if they are professional athletes and are risking a paycheck, Rothermich and John agree they should get the surgery.

With the surgery, John was able to extend his career by 15 more years. Kutt is able to pitch in college for another year. Due to COVID-19, baseball’s Opening Day is postponed until further notice.

Even though baseball is postponed the debate over the best course of action to repair the ulnar collateral ligament in pitchers will continue, even if baseball is cancelled. 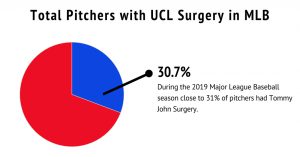 Photo at top: This a breakdown of the pitching motion of Ryan Kutt. The second picture is called the cocking phase, the highest amount of torque with maximal shoulder rotation — the phase also where the elbow is stressed the most.