Are you voting for someone because you think he or she has a cool name? Or it’s the first person on the ballot? Do you ever guess for offices further down the sheet or simply leave blanks?

In this big election year, a pair of online services want to empower you with free, nonpartisan candidate information for each race so that you can vote confidently — and not just for president.

“Learning about your local elected officials is a gateway to becoming more knowledgeable about what is going on in your community,” BallotReady Inc. CEO Alex Niemczewski said. “It could be motivating for people to take action on the things they care about.”

Cutting its teeth on the Chicago mayoral runoff and two state elections in Kentucky and Virginia last year, the for-profit startup is riding the tides of this election year to attract more voters to use its service. The four-person company is raising initial capital, and looking ahead to business expansion and profitability based on Democracy 101 – the representation of voters’ opinions.

Enter your ZIP code, address and which party’s ballot you’d like to see on BallotReady’s website, and you can compare each candidate’s profile including experience, education and stances on issues. More than 40,000 web surfers have used the website to ready their ballots in the past month. 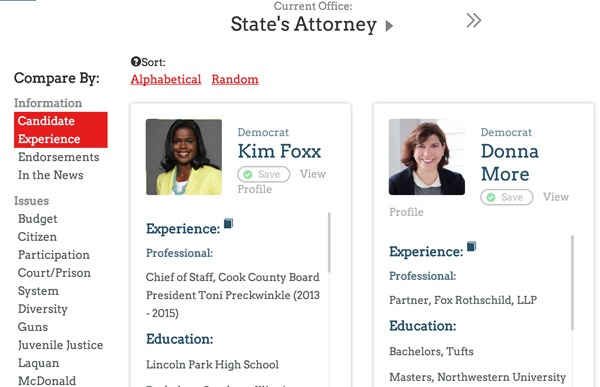 Illinois has 7.5 million, or 74 percent of state residents age 18 and over who have voted in the past four years, according to  nonpartisan advocacy group Illinois Campaign for Political Reform. The average voter turnout for Illinois primaries was a low 22 percent from 2008 to 2014, and 54 percent for general elections in the same time frame. Those who vote are BallotReady’s current target audience.

BallotReady, funded by organizations including the University of Chicago Institute of Politics with a total $140,000, is currently striving to raise $750,000 in a seed round until May to operate through 2017, according to CEO Niemczewski.

“We’ll cover one primary in a new state every month through September, and seven states this November,” Niemczewski said. “In the long run, we want to cover every candidate in every race in every election.”

BallotReady is banking on its belief that voters want the officials they elect to represent their viewpoints. Not profitable yet, the firm is focusing on enlarging the user base. The company plans to aggregate data on the issues voters care about and sell the data to analytics firms and work with campaigns.

“The market size of campaign spending is big enough that it’ll be more of an opportunity and more sustainable to run as a for-profit than relying on foundation support,” Niemczewski said. “We plan to do online surveys in the fall to get voters’ feedback on candidates’ policy proposals and sell that back to the campaigns.” 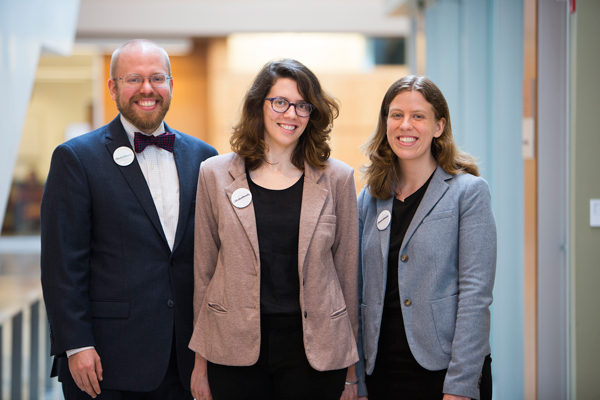 But some voters are concerned about their privacy. “I don’t like the idea of pandering and commodifying my personal data,” said Andrew Catalfamo, 29, a sales and support representative in a supply company who voted Sunday at Pottawattomie Park in Chicago’s 49th Ward in Rogers Park.

Candidates’ campaign ads in their BallotReady profile are also considered. Niemczewski said that when they tried out campaign ads in Kentucky’s election last fall, the company received only positive feedback from users, because, she said, voters like seeing how candidates represent themselves.

The problem BallotReady tries to solve is voters skipping or guessing for offices further down the ballot because it is time-consuming to glean information on dozens of non-presidential candidates who don’t have much new coverage, and many people have little interest in politics.

“The dominant, top-of-the-ticket, most interesting and most important race is the presidency,” said Brian Gaines, a political science professor at the University of Illinois. “If someone is really excited about a particular race, presidential or the state’s attorney or something, votes in that and skips the others, they’re still taking part in the realm of politics that is salient to them and has caught their attention. I think that’s fine.”

But BallotReady’s starting point is “local elected officials matter,” Niemczewski said. “They control the quality of our water, they decide on school funding and whether to open or close mental health clinics, and they control how much taxes we pay. It’s hard to get information on them.”

Considering the current fiscal issues troubling Illinois and the Laquan McDonald shooting plaguing Chicago among other issues unnerving the nation, some voters reflected on why they go to the polls in the first place.

“I think voting is a right, it’s a civic duty, and I’ve voted in almost every single election since I was 18,” said Linda Lynch, 57, a programmer analyst who voted Sunday at Pottawattomie Park. “Think about all those countries where people cannot vote, and how excited they become when they first cast their ballots.”