Last week’s police killing of George Floyd in Minneapolis, Minnesota resulted in widespread outrage and calls for protest nationwide — a protest that turned into days. Here’s what Medill reporters documented over the weekend.

Chicago’s Loop on Friday: The first sparks of protest in Chicago

CHICAGO — The omnipresent whirring sound of police helicopters echoed through the canyons in Chicago’s downtown Loop on Friday evening. Protesters marched north on State Street, accompanied by a heavy police presence, until they were blocked by a wall of officers on Ohio Street, preventing them from moving east.

The crowd yelled “Say his name, George Floyd!” as they confronted the line of officers, before resuming their march up State Street.

“Chicago police should walk with us,” Chicago Public Schools teacher Amreen Khadeer said after the confrontation. “Chicago’s teachers strike all the time, why can’t you strike against the system?”

Protesters marched south after a speech from organizers at Clark and Superior Street, when a demonstrator spotted Chicago Police Director Glen Brooks walking in a blue suit in the crowd.

“We’re going to watch very closely,” a protester tells CPD Director Glen Brooks walking south on Clark Street. “We know that your police are not going to keep us safe.”

“We’re going to watch very closely,” the demonstrator said to Brooks over a megaphone. “We know that your police are not going to keep us safe.”

Brooks declined to comment saying CPD is not holding interviews at this time.

Chicago’s Little Village and beyond on Saturday: Sights and sounds

CHICAGO — At 11 a.m., we started in Little Village, where protesters gathered in a strip mall parking lot across from the neighborhood’s iconic archway reading “Bienvenidos a Little Village.” Although Little Village’s population is predominantly Latinx, I saw people of every race.

The parking lot hosted one of the meeting spots publicized by the Chicago Alliance Against Racist and Political Repression, Pueblo Sin Fronteras, Familia Latina Unida and Black Lives Matter Chicago. The organizations had created a Facebook event titled, “Chicago: Justice 4 George Floyd — Stop Police Crimes — Free Them All Caravan.” And soon, this group and one gathered on the South Side would make their way toward Chicago’s Loop, one protester-filled car behind another.

At the Little Village spot, community leader Mara Castillo was one of the first to arrive. She greeted every passerby without hesitation and encouraged her teenage daughters to do the same.

“We want to unite, and this is the time for us to say to everybody — especially white supremacists — brown and black unite,” Castillo said as she raised her fist above her head.

Castillo’s message embodies the sentiment I observed as I documented the protests that unfolded later in the Loop. Every shout, every step, every question of whether anybody needed water or food, and every raised fist meant something.

People of every background, united in solidarity, demanded and continue to demand justice for George Floyd and every other victim of racist police brutality across the city and across the country. 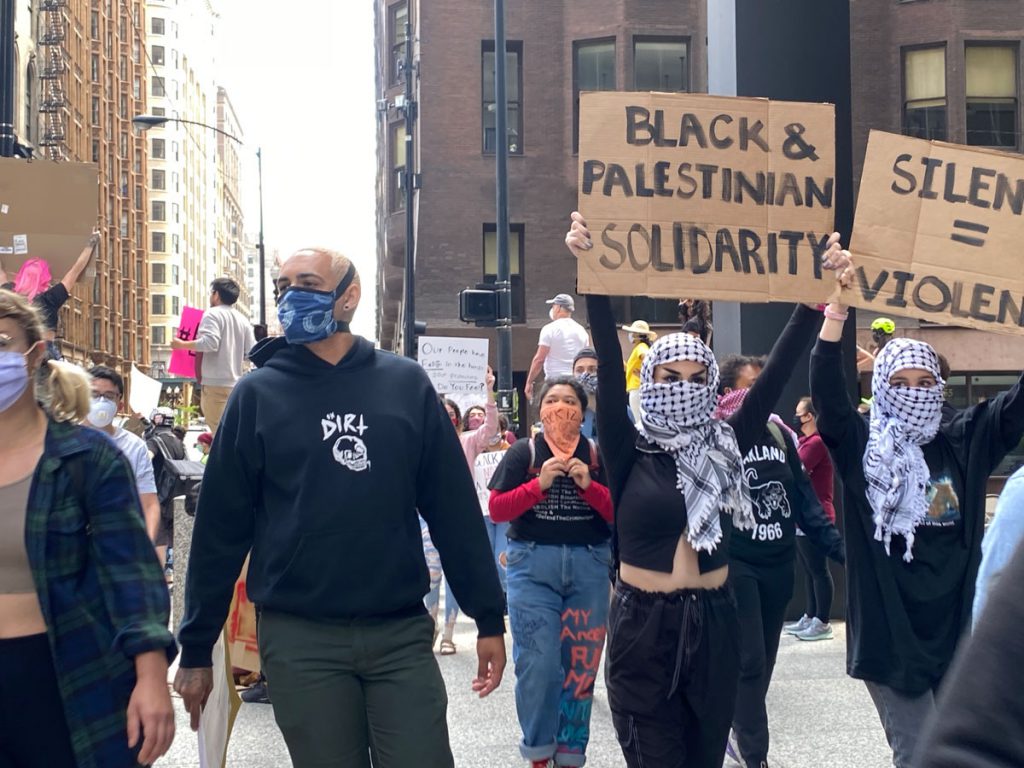 CHICAGO — “Hands up, don’t shoot. I can’t breathe,” chanted some thousands of people in downtown Chicago on Saturday, May 30.

With bullhorns in hand and masks on, protesters united at Federal Plaza in honor of the Black Lives Matter movement.

The protest was in defense of black life, but the crowd reflected a broader diversity.

There were signs that said “Latinos 4 Black Lives,” “Koreans 4 Black lives” and “Palestinians for Black lives,” suggesting a sense of collective communal accountability.

“I’m from the Latinx community. There’s lot of racism in the POC community. We perpetuate a lot of negative stereotypes of the black community. We need to hold each other accountable,” he explained.

As the momentum of the BLM movement fluctuates, many young African Americans wonder how to and why keep their momentum.

“I have to hold my fist because there’s nothing else I can do,” he said.

Chicago’s Loop on Saturday: A stopped bus in the march

CHICAGO — On May 30 at 3 p.m., protesters climbed on top of a 151 CTA bus in front of the Madison/Dearborn-State bus stop. They were waving signs and yelling slogans.

I stood under the bus stop and raised my head to see more and more teens climb onto the top. The bus driver, stuck in the empty bus, paced from the back to the front.

The sound of an approaching police siren from the opposite side of the street dropped like an invisible bomb in the crowd. The panic and fear felt transient. People spread in different directions. Protesters above hurriedly jumped down from the bus top. Some shouted, “Don’t jump!” But everyone quickly left the bus. People still in the middle of climbing soon gave up.

The crowd started to move. I walked past the bus, the front glass of which was painted in green. Several protesters stopped to take photos with the bus, an abandoned trophy. I didn’t see any police officer coming.

Tampa on Sunday: Thunderous protests spread throughout the Lightning Capital

TAMPA, FLA. — The Tampa weather felt hot on the afternoon of May 31 — 91 degrees and humid. I drove through Ybor City, a neighborhood that usually burst with life and characters. Instead, business owners boarded up their windows.

I drove downtown and followed a group of officers in riot gear to the other gathering. Police vehicles blocked the entrance to Interstate 275. Officers with protective face masks, shields, tear gas, batons and guns stood firm in a line. Protesters with their signs faced them, occupying the parking lot at Scott Street E and Jefferson Street N, chanting.

I arrived as the police deemed it an unlawful gathering, giving everyone five minutes to disperse. Helicopters flew overhead, sirens echoed through the air, one protester yelled, “Are you kidding me?” A few pop, pops of rubber bullets were heard over it all.