With an assist from the Blackhawks, a family tries to honor their son’s last wish

For weeks, 5-year-old Ross MacNeill had been experiencing headaches. His mom, Kim MacNeill, took him to the doctor for an MRI. Shortly after, on July 3, 2009, she received a phone call she would never forget. The doctor said the test showed her son Ross — whom she called “the greatest bundle of joy”– had a brain tumor.

Over the next year Ross received intensive chemotherapy and radiation treatments, but then another MRI revealed that the cancer had spread to another part of his brain. This time, no new medical treatments were available for children with his condition. Despite the pain, Ross lived by the motto “life is good” until he died on May 13, 2013.

He showed “a level of courage, selflessness and maturity that I had never seen before,” said Rachel, his 16-year-old sister. Cancer didn’t stop him from going to school, playing hockey, working with a personal trainer once a week and even mastering the cello. Just three months before he died, the Blackhawks fanatic skated in his last game.

The MacNeill family decided to try to fulfill his last wish–that no kids suffer the way he did. In 2011 they started the Ross K. MacNeill Foundation to fund research into a cure for pediatric brain cancer. Ross’ bravery and mission to help other kids caught the attention of his favorite hockey team, the Chicago Blackhawks, which has provided a powerful platform for Ross’ message to be heard. On game days, coach Joelle Quenneville will sometimes wear a tie that’s orange — Ross’s favorite color, in honor of Ross. “He said to me, ‘Mom, you can’t wear orange and not be happy,'” Kim MacNeill said. The Blackhawks, whose players have contributed time and money, have become an official partner of the foundation. 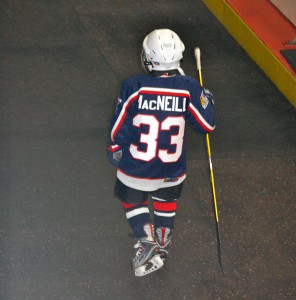 So far, it has raised more than $500,000 for research and new treatment therapies. It’s also funding a trial at Lurie Children’s Hospital of a vaccine that may be the future of treating children with brain tumors, said Kim MacNeill. The foundation also gives grants to researchers at the University of California San Francisco who are trying to stop tumor growth. Kim said she hopes that together they’ll one day prevent brain tumors from taking another child’s life. Ross never stopped fighting, and neither has the MacNeill family. 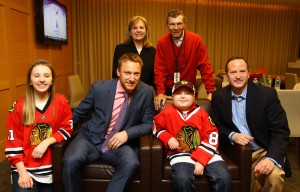