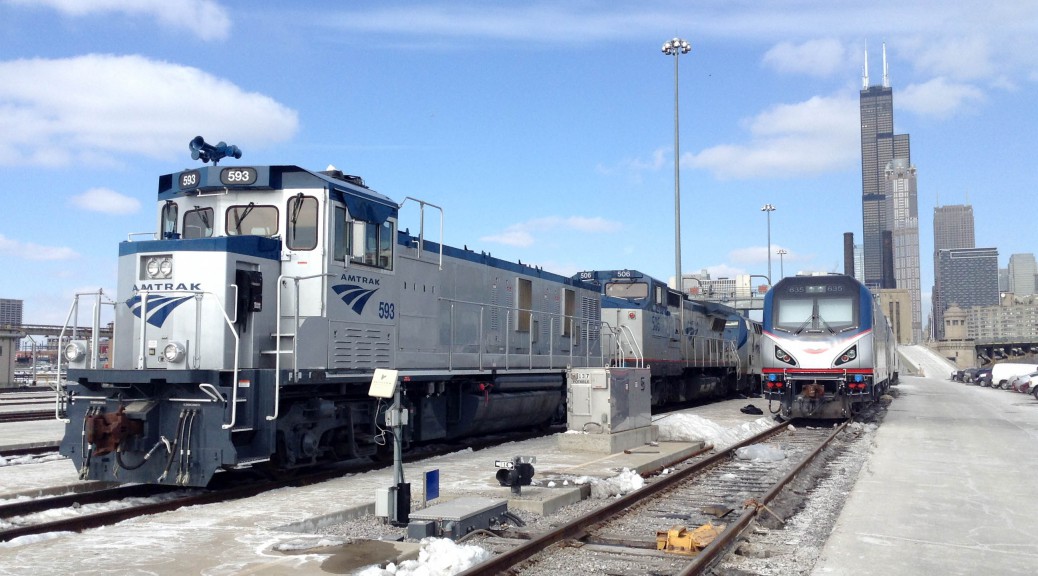 Chicago railroads are teeming with activity, routing 1,300 trains daily.  Travelers fill 800 passenger trains, while another 500 haul freight cars filled with corn from Iowa, coal from Wyoming, wheat from the Great Plains, oil from North Dakota and so many other commodities.

Currently the nation’s railways are the busiest they’ve been in years, causing logjams at spots throughout Chicago – such as 63rd and State, and along 75th Street. The bottlenecks reverberate throughout the economy and across the country.

“The railroads are moving more traffic than at any time since 2007 and the last recession,” said Ed Greenberg, a spokesman for the American Association of Railroads. Greenberg reported that 2014 saw more than 28.7 million carloads, containers and trailers take to the railways.

While the spike in rail traffic is a national phenomenon, Chicago shoulders a big share of the burden with its prominence as a rail hub where six of the nation’s seven largest railroads converge.

“Chicago is at the epicenter of the nation’s rail system,” said Greenberg. “Roughly 25 percent of all rail traffic cuts through Chicago.”

Increased rail volume has created the bottlenecks, according to local rail authorities.

“The Chicago region has become capacity-constrained and this is a choke point for freight,” said Jeff Sriver, director of transportation planning and programming at the Chicago Department of Transportation.

Shipping oil from the domestic fracking boom is often blamed for the glut. But numbers show that crude oil is still just in the minor leagues of rail transport and suggest that a more general upswing in the economy may be the main force behind snarled rail traffic.

Amtrak identified a litany of factors that have caused rail traffic to slow, stating that, “the congestion problem is caused by a combination of rising demand on the East Coast for more intermodal freight and crude oil shipments which originate west of Chicago.”

Delays for travelers and freight

That influx in activity has caused considerable delays for rail travelers and even worse delays for freight, which does not enjoy the same prioritized service as passenger trains on shared lines. Amtrak warned holiday passengers that, “delays of four hours or more for Amtrak trains operating between Chicago and Cleveland have become a near daily occurrence.”

Wasted time is just one impact of congestion. Other ripple effects include increased road traffic and elevated levels of air pollution. Collectively, the problems “threaten the economic vitality of the region,” according to the Chicago Region Environmental and Transportation Efficiency Program, or CREATE – an effort launched in 2003 to address the region’s notorious standing as a rail traffic pinch point. The organization partners rail companies with government agencies at the local, state and national level to improve the flow of freight and passenger trains through the area, through construction of overpasses, underpasses and other projects.

“Chicago is at the epicenter of the nation’s rail system. Roughly 25 percent of all rail traffic cuts through Chicago.”
-Ed Greenberg, American Association of Railroads

Since inception, the program has directed $3.8 billion in investment toward 70 projects, including a $142 million railroad bridge at 63rd and State streets in Englewood that was completed in October. Attention is now shifting to CREATE’s largest effort, the 75th Street Corridor Improvement Project, which aims to implement a series of improvements to rail crossings along two passenger and four freight lines in the neighborhoods of Ashburn, Englewood, Auburn Gresham and West Chatham.

Of the 70 projects targeted by CREATE, 70 percent are reportedly done or approaching completion. Since its founding, the average time for a train to pass through the Chicago area has been improved from the glacial rate of 44 hours to 33 hours.

At the Chicago Department of Transportation, Jeff Sriver said that the increase in freight traffic is part of a decades-long trend, and confirmed that oil is just one of several factors fomenting the rail gridlock.

“These oil fields have come up over the last ten years and they don’t have pipeline access,” said Sriver, describing rail’s role in absorbing the output from the Bakken oil fields in North Dakota and Montana.

“Adding that whole new commodity to the system has made an impact,” he said.

Yet oil represents just a sliver of overall freight on the tracks.

“Crude by rail accounts for about 1.6 percent of all carloads that are moved in the U.S. by railroad,” said Greenberg.

Meanwhile, the most prevalent rail cargo remains intermodal freight – the term given to shipping containers and trailers that can travel by boat, truck, or train. The strengthening economy has led to record volumes of intermodal traffic occupying the nation’s rail lines, constituting 47 percent of all domestic rail freight. Over 665,000 more intermodal containers were moved by train in 2014 than in 2013 – a surge the American Association of Railroads website says is a good “indicator of overall economic growth.”

To alleviate the pressure, considerable public and private investment is being funneled toward improvements in rail infrastructure. The railroad industry has assumed a significant share of investment on their own, spending a record $27 billion on capital and maintenance projects in 2014, according to the Association of American Railroads, with another $29 billion in the pipeline for 2015.

“We’ve been doing a lot of work to expand our capacity,” said Roxanne Butler, a spokeswoman for BNSF Railway. Butler said that service has been steadily improving since February of 2014, a period she characterized as “the most challenging time ever” for the railroad due to high demand and other pressures, such as a harsh winter.

In Chicago,  CREATE has produced a number of success stories. But the triumphs on the local level are often overshadowed by the traffic more broadly choking the country’s rail network.

To help build on the inroads made by CREATE, railroads and a number of government agencies have established a leadership panel called the Chicago Gateway Initiative, which, according to a December press release, will attempt to secure additional funding for rail infrastructure projects and “improve cooperative efforts among the railroads.”

That initiative, however, is currently compiling a final report on recommended infrastructure investments that will be issued in May.