A grandfather’s battle against the lead in drinking water

Hyde Park resident Gordon Berry had never imagined that the drinking water in his century-old house could be contaminated by lead, until his 2-year-old granddaughter, who resided with him, had a routine blood test in January 2016.

“They found lead in her blood,” Berry said.

Horrified by the result, Berry “immediately” called the city to test the water. He didn’t hear the test results from the city until an investigative reporter knocked at his door in early May 2016.

“She said, ‘did you know this house has the highest lead content in the water of any house measured in Chicago?’”

“And we would never have known but for her,” Berry said.

The reporter also told him that three Chicago residents had filed a legal complaint in February, alleging that the city’s maintenance work on water lines was causing “elevated and unsafe” lead levels in the water delivered to their houses.

In Chicago, about 80% of the properties, including Berry’s 131-year-old house, connect to the water mains through aging lead service lines. A disturbance such as installing water meters, an EPA study has shown, can damage the protective coating inside the lead service lines, thus causing lead to leach into the water.

Berry joined the lawsuit as a plaintiff in January 2017.

He claimed that the water meter replacement in 2009 – which the city said was 2005 – placed his family at a higher risk of lead contamination. The city countered that the basement piping in Berry’s house was to blame.

The plaintiffs’ complaints were dismissed twice by the circuit court, but the dismissals were reversed over a dissent by the appellate court in May 2019. The city appealed to the Illinois Supreme Court, which decided to hear the case.

“We will be almost dead before it’s all done,” Berry said.

In his brief to the Supreme Court, Berry’s attorney, Mark Vazquez, wrote that the plaintiffs now “must undergo diagnostic testing to determine the extent of their physical harm.”

The plaintiffs asked the city to establish a trust fund to cover the medical test costs for residents who had had their water mains or meters changed after January 2008.

The city, however, argued that plaintiffs didn’t prove a “present physical injury.”

Vazquez rebutted that waiting until physically manifesting an injury is too late. He compared the case to a company dumping waste into a river and exposing nearby residents to the polluted water.

“Who should pay for that testing now? Why should the residents have to pay for it when a company has been exposing them to this harm?” Vazquez said.

Berry is not the only Chicago resident who has requested a water test. In the first half of 2019, representatives of the Chicago Department of Water Management (DWM) visited 30 residences on average every day for water testing. 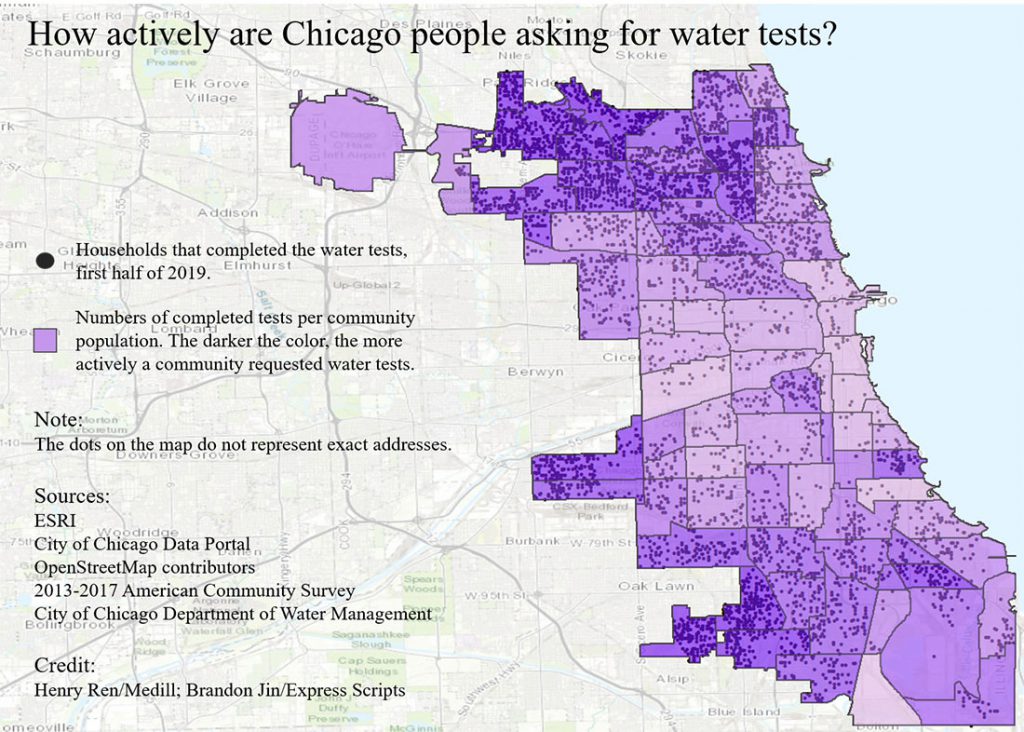 The results showed that about 36% of the tests, or nearly 2,000 residences, yielded a lead level of no less than 5 parts per billion in at least one sample collected. The maximum lead content allowed in bottled drinking water is 5 ppb.

David Jacobs, adjunct associate professor at the School of Public Health of the University of Illinois at Chicago, said the 5-ppb level is not “extraordinarily high”. For children, he said, the primary source of lead exposure is in paints, soil and dust.

But he added, “lead in any amount is not a good thing and should be reduced to the fullest extent possible.”

Still, the city has no timetable to replace the lead service lines, though the DWM has announced plans to explore the feasibility of citywide replacements in 2018.

Elin Betanzo, a water quality expert and former EPA employee based in Michigan, criticized the Chicago water utility for not replacing lead service lines at the time of water main replacements, which, she said, is the cheapest time to do so.

“They are allowing a very well-known and well-documented risk to continue to occur in homes,” Betanzo said.

All lead service lines in Michigan are required to be replaced over 20 years starting from 2021, as the state set a new standard in 2018 to safeguard drinking water.

But replacing all lead service lines in Chicago could be a “multi-billion dollar program”, according to the DWM. 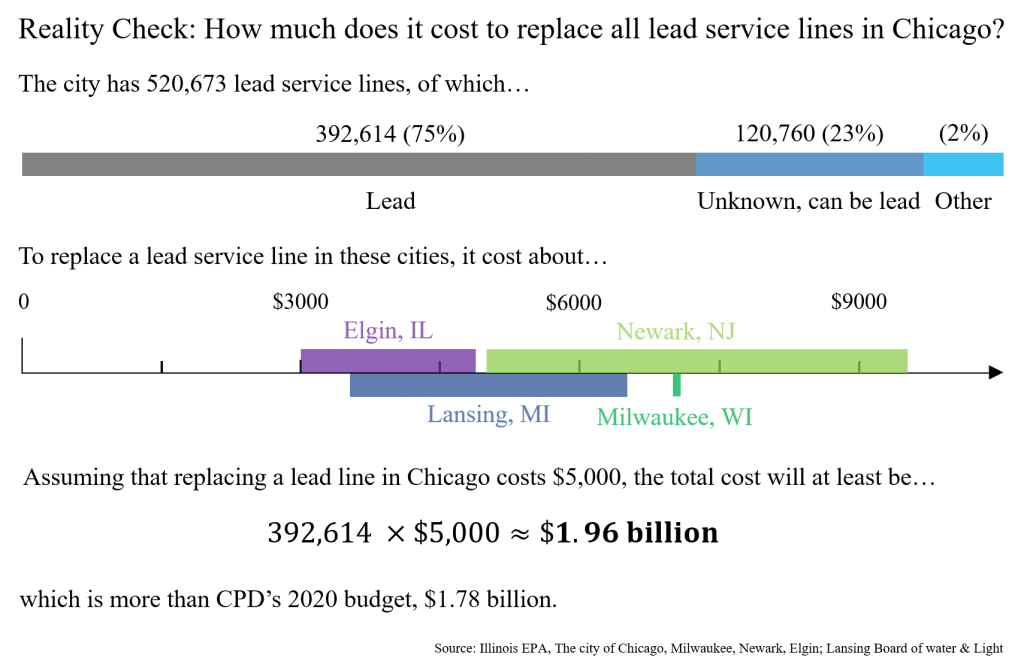 The quote Gordon Berry got, however, was not that cheap. Replacing the lead line from the street to the house would cost him $30,000, which he said is because the house is “long.”

Weeks ago, plumbers changed all lead pipes in his basement to copper, which cost him $3,000.

Since three years ago, he has flushed the toilets and run the water in the kitchen sink for five minutes every morning to reduce lead, as suggested by the city.

He installed a chemical filter in his house, but he rarely uses it now, because the filter requires changing every few months. He still drinks tap water because he “flushes the water regularly.”

But not his granddaughter, if she and her mother come to Berry’s house.

“They only drink bottled water, I think, even at home on their own.”

“Her mother never drinks the water even from the filter. She doesn’t want it to happen again.”

Photo at top: Gordon Berry, a Hyde Park resident, stands next to the copper pipe in the basement of his house. He changed his indoor piping from lead to copper weeks ago, which cost him $3,000. (Henry Ren/MEDILL)