What started as an idea formulated in MacLeod’s garage is now a thriving business and pioneer in online radio news. Launched in December 2014, Rivet obtained investments from friends and family totaling $20,000 in its first year of operation, according to Terri Lydon, vice president of sales and marketing.

“When a story breaks, a lot of times you will get bombarded with several push notifications on your phone from other news outlets. Instead, here at Rivet, we’ll wait a few minutes to see what develops and once we have a new interesting fact about the story, then we will make the decision about whether to push the story or not,” Harston added.

Personalized user experience is important to the company, so Rivet can be seen as the “Tinder” of audio news, following a Tinder-inspired “swipe” interface, according to Harston.

While other on-demand digital radio services and podcasts exist, such as music streaming website Deezer’s Stitcher Radio, Rivet distinguishes itself from its competitors by producing original content.

Harston said, “While Stitcher only does podcasts, we do podcasts, some original content and we have content from our partners. While Stitcher is a good competitor, we are not all created equal.”

Rivet’s revenue surged to $600,000 in 2015. A significant contributor is its “Intercall Conferencing Center” described by Harston as playing news on-hold during conference calls instead of “boring” music. Rivet creates and produces the content for these conference calls.

Part of the company’s business model and strategy includes content partnerships with outlets including the Associated Press, Market Place and American Public Media, aimed at driving consumer acquisition and promotion of the brand.

While Rivet Radio has raised $4.8 million through sales of convertible notes, like all small businesses the company has faced several challenges since its creation. 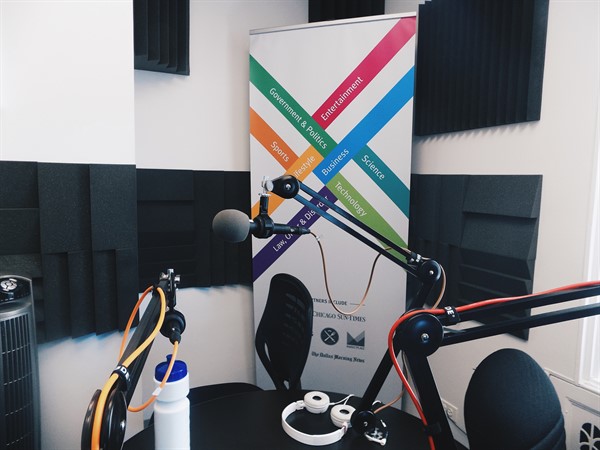 “The main challenge we’ve faced is determining on which business opportunity to focus in the near term. While consumers in cars, home an on mobile devices are our long term big opportunity, it is going to take time and capital before we see significant revenue from these efforts,” said Lydon.

The company is focusing on accelerating advertising revenue through its business and media costumers.

“Customers running on our platform will generate millions of monthly ad impressions and we’ll participate in that revenue. Plus, we’ll be able to leverage our customers’ advertising volumes to monetize Rivet’s direct distribution,” said Lydon.

With an increasing demand for podcast and digital radio services, founder John MacLeod believes in the future of audio news. He aptly says, “If you are inside someone’s ear, you are in someone’s head.”

A listener catches up with news of the day on Rivet Radio’s mobile app. (Poroma Pant/MEDILL)