SIEM REAP, Cambodia – Click. I duck. Click click. I take two steps back, one to the left. Click click. I lift my camera. Focus. Click the shutter once, twice more, and spin around, clutching my camera to my chest and catching a stream of cold water on my back. I’m rapidly getting soaked, but my camera is dry.

With eye-catching decorations, reverent religious ceremonies and near-constant water fights, this past week’s Khmer New Year celebration is every photographer’s dream – and nightmare. Sprinkling people with water is a blessing in many cultures, and while Cambodia’s New Year’s water fights hark back to those customs, holding a camera doesn’t give you immunity to blasts of water from the hoses, buckets and neon water guns that nearly everyone above the age of three seemed to be wielding.

Nevertheless, capturing the beauty of the city festooned in decorations, of Cambodians and foreigners alike diving into the games and water fights, is worth the certain soaking.

Khmer New Year is about more than just water fights, though. Spread over three days, from April 14-16, the celebration is a time of family, friends and religion for Cambodian people. 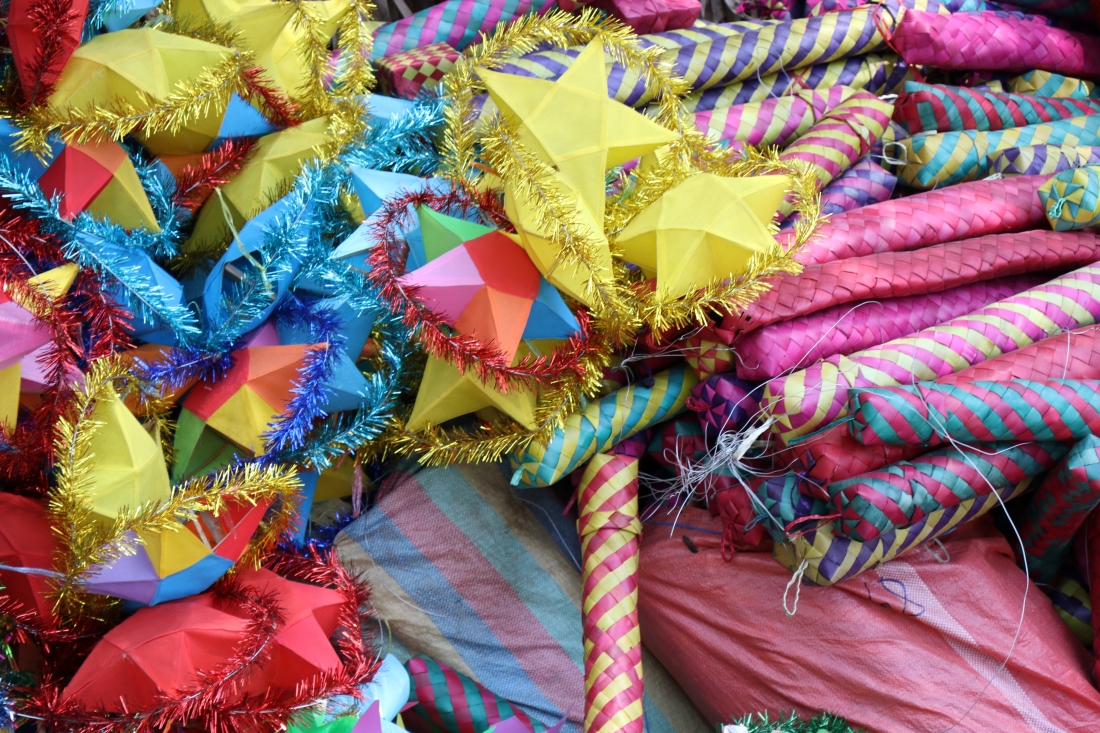 “Khmer New Year is a traditional celebration to mark the end of the year and to welcome the new year as well,” said Phanna Sok, a resident lecturer in environmental ethics and development at the School for Field Studies in Cambodia.

The capital city of Phnom Penh is usually a ghost town during the New Year, as its residents travel to visit their families in their home provinces, Sok said. Siem Reap, on the other hand, comes alive.

“Usually, people don’t tend to stay in the capital city or in the urban areas,” Sok said. “They usually travel to the provinces of their origin. The people you witnessed at the Royal Garden could have come from different places. They are probably not the local residents here.” 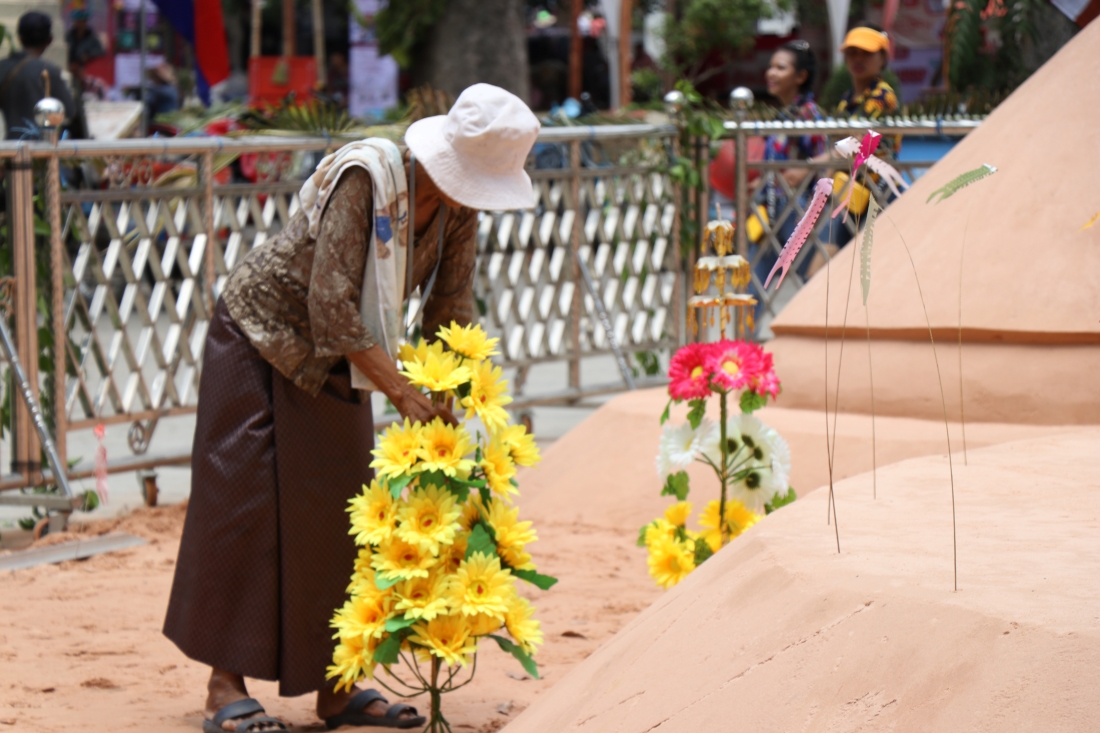 In Siem Reap, this year’s celebrations centered at the Royal Independence Gardens, a change from previous years when the celebrations were hosted at the city’s historic Angkor Archeological Park. The three-day celebration included religious ceremonies, traditional sand dunes and vendors selling everything from roasted meat to cotton candy to t-shirts.

The gardens also featured a very loosely enforced “wet zone” for the water activities, though no one seemed to take the zone’s boundaries all that seriously. 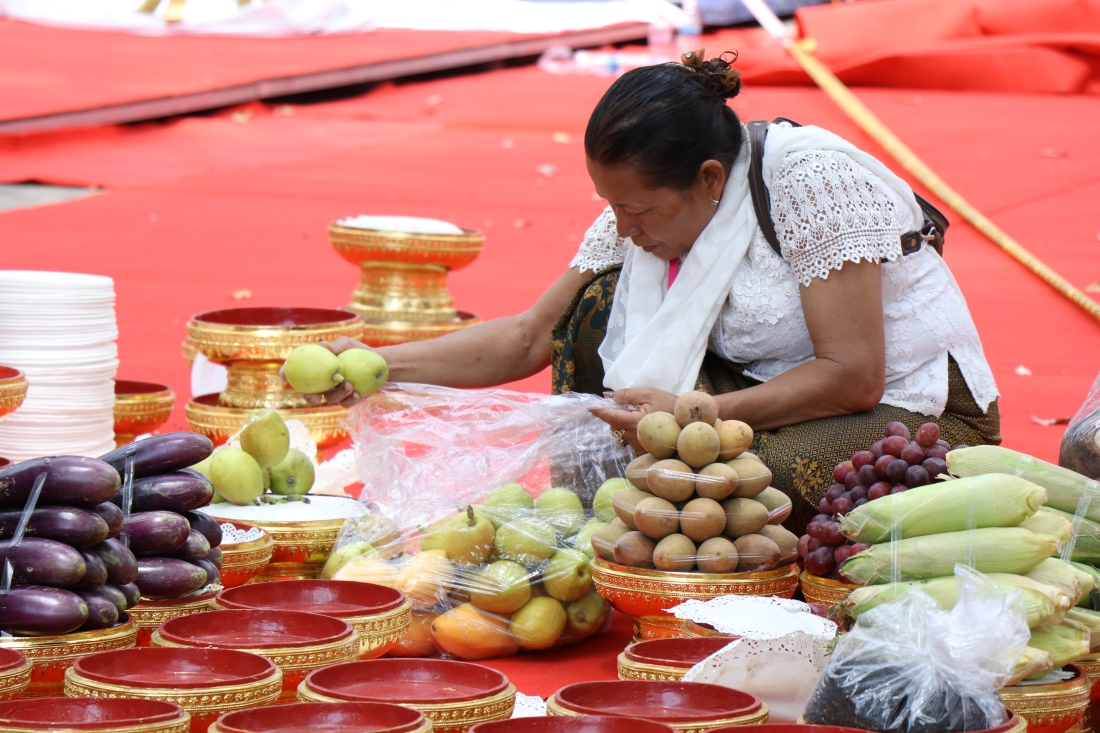 Songkran, the first day of the New Year, is traditionally devoted to preparing food and taking it to pagodas, or Buddhist temples, to offer it to the monks in exchange for blessings, Sok said.

“The second day, usually, people go to visit friends and family, relatives,” Sok said. “They go to each other’s houses, and they stay there. They have a fun time, good time together. And it’s a time when people talk about life.”

The traditions each family practices are varied depending on the makeup of each family – a young couple with children will have different individual traditions than an older family, Sok said. But the sentiment is the same: reunion.

“For me, the meaning of Khmer New Year [is a] kind of celebration to join with family and friends,” said Tony Yon, a School for Field Studies program assistant. “We are relatively small, so we have a lot of memories with our friends, with our village – it doesn’t matter old or young.” 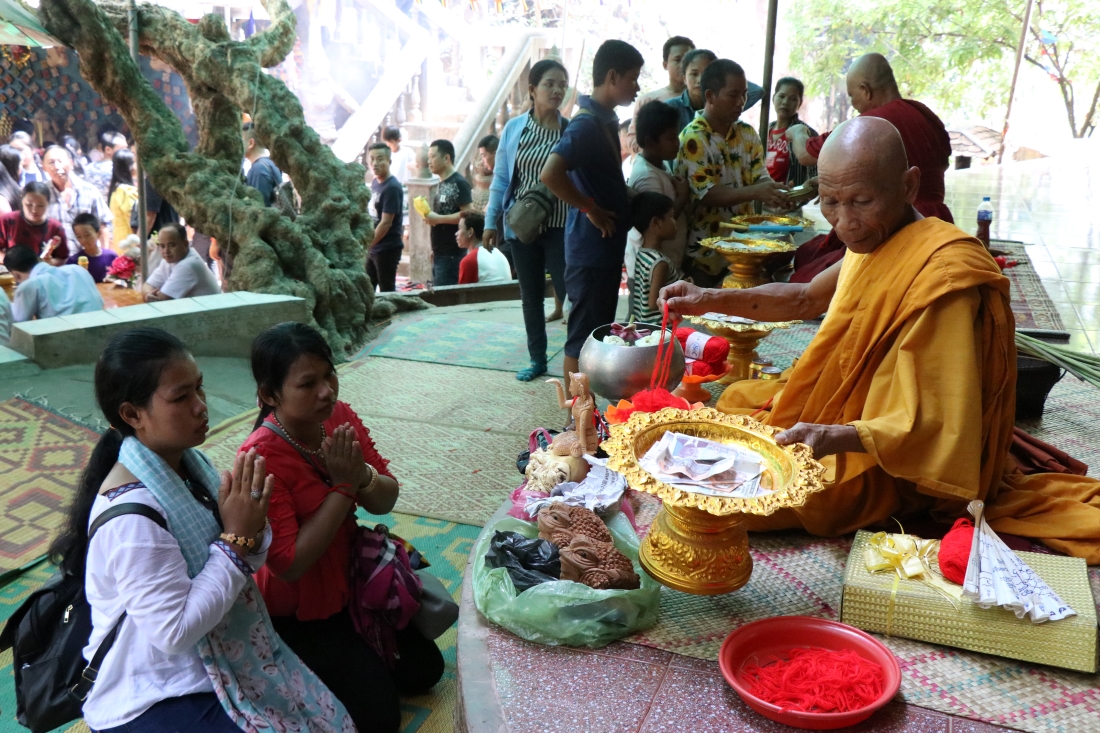 Vearak Loeng Sak, the third day of the New Year, is a day of respect and repentance. On this day, Cambodians show respect to the Buddha and to their elders by bathing them, or washing them lightly with water, Sok said.

“That is a sign of respect and a sign of apology,” Sok said. “For example, they tend to believe that if they have done something wrong during the year, and they have not had the opportunity to apologize, or they didn’t happen to know there was a mistake they have made, so that last day is the opportunity for them to apologize by doing this to their parents and elderly people and all the respected ones.”

This custom is likely where the citywide water fights originated, Sok and Yon suggested. Additionally, in the past, people would spritz others lightly with perfumed water during the New Year as a way to bless them and wish them good luck – an act that is part of many traditional monk blessings. This, too, could have been part of the origin of today’s water fights. 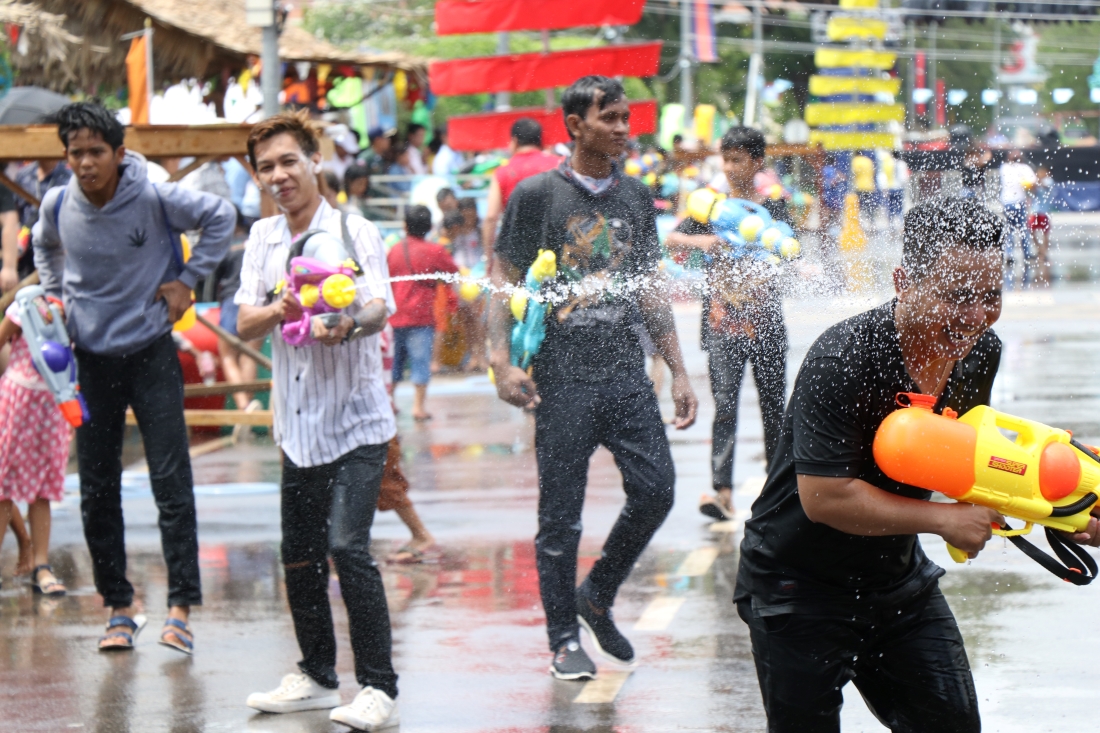 “That was what really originated from our own culture back in the old days. And that was the sign of blessing you, of good luck, good health, safe travels, fun times, things like that,” Sok said. “That is not going to make you soaked to the skin. That’s not. But then it, as the globalization is influencing the society, that kind of activity evolves to more and more and more and more aggressive behavior. People changed from doing that to splashing water at each other and to water guns.”

The water fights might be a way that younger generations mimic their elders’ traditional practices, Yon said. And they might simply stem from the triple-digit temperatures common at this time of year.

“New Year is in the middle of dry season,” Yon said. “So playing water, it is advantageous.” 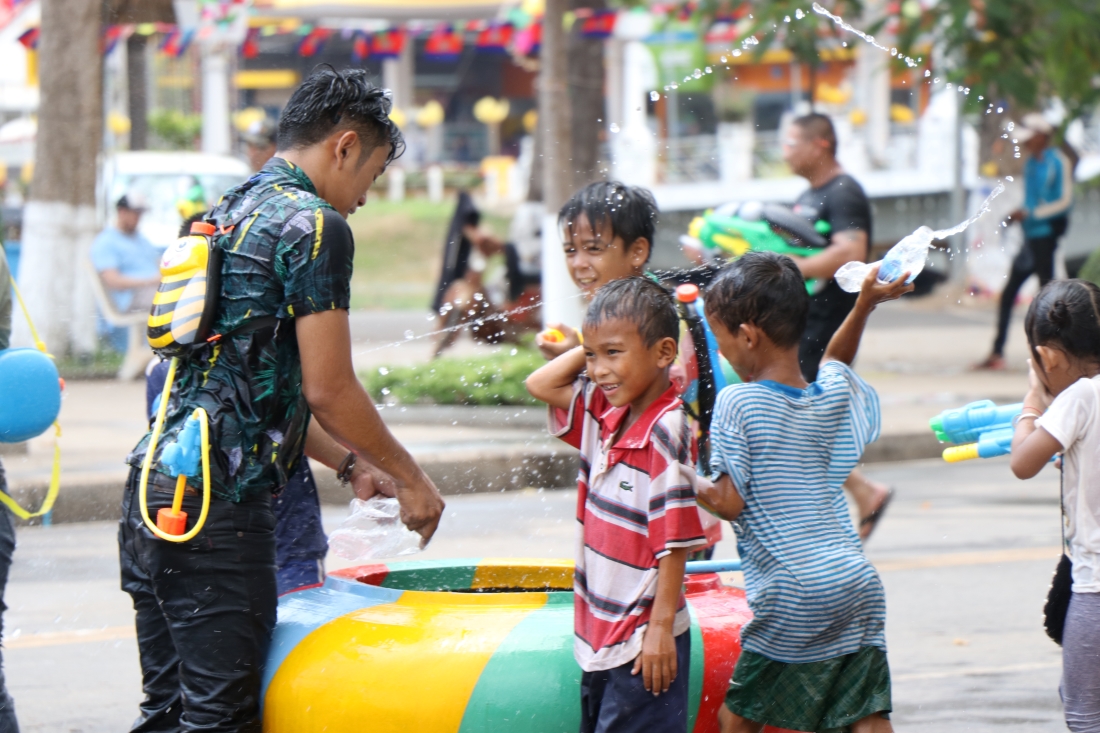 Yon grinned when asked what the New Year looked like in his village.

“Noisy, happy and no limit time of boom box,” he said, laughing. “When I say boom box – the people play loud music.”

His community also celebrates with a lot of dancing and plays traditional games, Yon said. At the celebration at Siem Reap’s Royal Gardens, pop music blasted from speakers on the “wet zone” side of the complex, fueling the energy for massive games of tug-of-war, sack races and more. 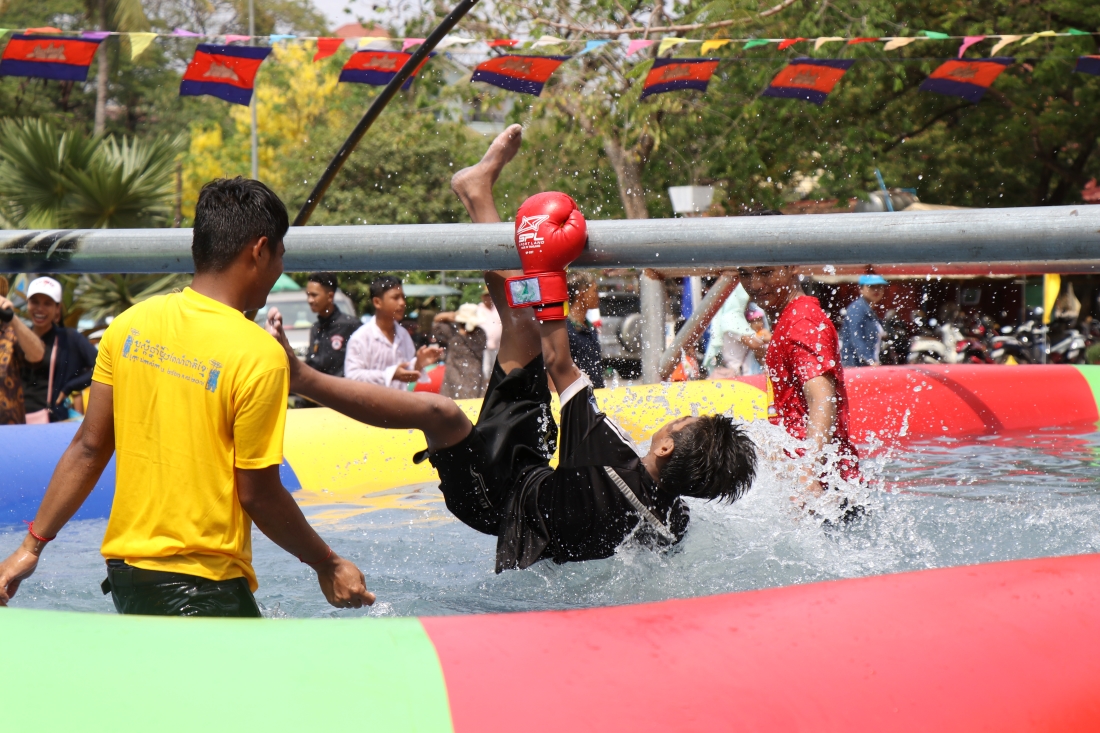 These games are an important part of Cambodian culture because they provide the first place that young men and women in the traditional, conservative society really begin to interact, Sok said.

“That’s the time where young males and females start to get in contact and they start talking, and where love starts too,” Sok said. “That’s traditionally how people get to know each other.”