In the case of Lina Pakrosnyte, founder and CEO of Urban Leash, that moment occurred in the summer of 2013 when her mother was visiting and lamented that she had to run home to let the dog out.

As the Uber arrived, Pakrosnyte wondered: wouldn’t it be great if someone could order a last-minute dog walker the same way my mom just ordered a ride?

That thought was the origin of Urban Leash, a mobile app-based pet care service that allows busy pet owners to request walkers and sitters with just a few taps on a smartphone. Launched in August 2014, Urban Leash combines traditional dog-walking services with GPS tracking and photo sharing so owners can monitor the sessions from anywhere they happen to be.

What began as a glimmer of an idea has become yet another successful tech company to emerge from Chicago’s growing startup scene.

Along the way, they learned that just about every day is a struggle for an entrepreneur trying to turn a dream into a profitable business, and there are certainly no guarantees of success.

“Just because you come up with an idea, it doesn’t mean that it solves a problem,” said Pakrosnyte.

The Urban Leash duo knew they could solve a problem for pet owners, but they were faced with one of their own. Namely, how does one start a business from scratch with almost zero capital and no customers to speak of?

In the parlance of small business, entrepreneurs have to “bootstrap” their way to viability. That means building a company one step at a time, leveraging outside resources and looking for investors to provide incremental infusions of capital to overcome cash flow hurdles.

For Urban Leash, that process was made easier thanks to one particular advantage: they were generating revenue from day one. Many tech startups go months or even years without sales because they build a product without a defined customer base.

Through market research and customer interviews, Pakrosnyte and Maltsiniotis knew there was a large segment of Chicago pet owners who were ready to pay for the service they were offering.

“On our first dog walk, we took in revenue,” said Maltsiniotis. “That was in August of 2013 and we didn’t actually have our official launch until August 2014.”

With demonstrated revenue and user potential, Urban Leash was on the verge of something the owners felt was big, but it was struggling with two challenges that nearly all young companies face: attracting new customers and getting outside funding.

The search for solutions to those problems led Urban Leash to other young Chicago companies at the heart of the city’s startup ecosystem.

Any discussion revolving around tech startups is sure to include the buzzwords “incubator” and “accelerator.” These are companies that help tech entrepreneurs seek guidance, funding, and growth strategies that can push them beyond the early stages of development.

In Chicago, the best-known of these startup hubs is 1871, a collaborative space located in the Merchandise Mart.

In 2014 the Urban Leash founders signed up for 1871’s Lean Startup Challenge, a 12-week program geared toward helping entrepreneurs transform their abstract ideas into tangible businesses.

Pakrosnyte and Maltsiniotis went through an entrepreneurship “boot camp” where they learned how to generate business models, navigate product development cycles, and perhaps most importantly, conduct customer interviews about how to improve the Urban Leash user experience.

Initially skeptical, Maltsiniotis, a self-taught tech whiz with a decade’s worth of experience in Web platform design, found the 1871 program invaluable. Though well-versed in the technical aspects of Web architecture, he knew next to nothing about organically growing a customer base for his own product.

“There’s a little bit of insanity in that. But as an entrepreneur, you have to be a little insane.”
—Urban Leash CTO Demetri Maltsiniotis on the mindset of a tech entrepreneur.

“I thought I had the skills to run a business, but I had no experience dealing with customers,” said Maltsiniotis. “We learned how to find customers and interview them in a non-biased way so we were able to get honest feedback to guide the business.”

Similarly, Pakrosnyte was in uncharted waters. An attorney by trade, she, too,  was making her first foray into the world of tech entrepreneurship.

For David Culver, the chief collaboration instigator at Chicago incubator VentureSHOT, the duo’s drive to succeed outweighed their lack of experience. He met the Urban Leash founders when they were enrolled in the 1871 Lean Startup Challenge, and he explained to them how his company could help scale their business and locate new funding sources.

What started as an informal mentorship became a true working partnership when the would-be entrepreneurs enrolled in VentureSHOT’s strategic growth program. From the beginning, Culver was eager to work with Pakrosnyte and Maltsiniotis.

“I could see they had a passion for the business and actually listened to what we suggested,” Culver said. “I asked them, ‘Do you want to be the best pet services company?’ Urban Leash showed me they wanted to be the best.”

Capital investment is lifeblood of every startup, and even the best business ideas will founder and die without it.

By early 2015, Urban Leash was running out of money and desperate to avoid that fate.

“There was frustration because we weren’t making money, we were pumping everything into growth,” explained Maltsinoitis. “Lina was burning through savings. We hit a wall and realized we needed to grow.”

Fortunately, VentureSHOT had an established a network of investors who specialize in alternatives like micro loans, profit sharing, and convertible debt. Those types of funding are indispensable to unproven startups that are unable to secure business loans from banks or attract the attention of high-level venture capitalists.

One prospective backer was Al Arias, a former mechanical engineer turned alternative investor who had been funding VentureSHOT-managed companies since 2012. Arias looked at the company’s fundamentals and was convinced it was a good bet.

“I liked Urban Leash. They were smart, motivated, and focused, but they needed cash,” he said. “The money we gave them helped them to grow.”

Arias extended Urban Leash a micro-loan of $20,000 and followed up with a second loan of the same value as soon as he recouped his initial investment.

Micro-loans are especially important to startups because they accelerate the growth process without requiring entrepreneurs to give up an equity stake in their fledgling companies. According to Culver, those loans also create value well beyond their initial cost.

“It only takes relatively small amounts of capital to do big things,” he said.

Their funding worries assuaged (at least temporarily), Pakrosnyte and Maltsiniotis turned their focus toward an elusive goal: building a Web and mobile product worthy of their vision. 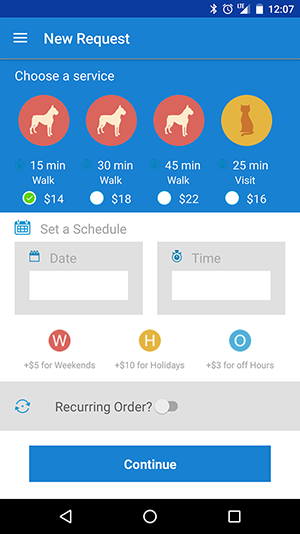 The Urban Leash app utilizes a simple interface that allows users to choose the duration of the walk and set up repeating appointments. (H. Will Racke/MEDILL)

By the spring of 2015, Urban Leash was a fully operational, revenue-generating company, but it was still trying to perfect its core product feature, the mobile app. Pakrosnyte and Maltsiniotis found a precious opportunity to solve that problem when they were accepted into the prestigious Techstars accelerator program that summer.

Techstars is a business development company with branches in several U.S. cities that provides promising tech startups a path to critical needs like capital investment, customer acquisition, and marketing services.

Its accelerator program also focuses on developing a satisfying user experience, something that had stymied Urban Leash from day one.

“The first iteration of the mobile app was not what we wanted,” Maltsiniotis recalled. “And the app we built was not necessarily what our users wanted.”

Pakrosnyte and Maltsiniotis spent the first three weeks at Techstars re-engineering the app’s user interface and user experience, or UI/UX. They observed the way users interacted with their product and made small changes to the app flow that created a more pleasant and efficient experience. Throughout the program, the duo learned how to apply user input in ways that stayed true to their core vision for Urban Leash.

“They are willing to take risks, even though they are not risky people by nature. I knew they were creating a sustainable and enduring business that had a purpose.”
—VentureSHOT’s David Culver on why he wanted to work with Urban Leash

“Listening to your customers is key,” said Pakrosnyte. “It’s about finding a balance between their feedback and how you want to grow your company.”

Patrick Gallagher, who started using Urban Leash last April, is a fan of the app’s simple interface and GPS mapping that shows him exactly where and when his dog Gracie is taken on her daily walks. Those conveniences of technology are important, but Gallagher said he keeps going back to Urban Leash because of its human touch.

“The caliber of the walkers is very high,” he said. “You can tell the people they employ really do it because they love it.”

Pakrosnyte hopes the combination of technological innovation and timeless customer service will be a foundation for success as they cover more territory. With just three full-time employees and a cadre of vetted pet care providers, Urban Leash currently serves neighborhoods from 18th Street north to Lawrence Avenue and from Western Avenue east to the lakefront, but the company plans to cover more of Chicago and, eventually, other markets.

“Chicago is such a pet city, there’s a lot of opportunity out there,” said Pakrosnyte. “We definitely want to expand to other cities.”