For the first time, Chicago’s next mayor will be determined in a runoff election as a group of challengers kept incumbent Rahm Emanuel from reaching the simple majority he needed for an outright victory.

The AP called the race “an embarrassment for the former White House chief of staff.”

Jesus “Chuy” Garcia proved to be a surprisingly formidable opponent. His grassroots, neighborhood-centric effort contrasted with Emanuel’s well-financed traditional media blitz. The two are now scheduled to face off on April 7. 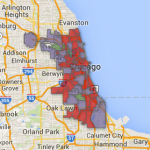 The polling results show that fewer voters turned out in the chilly February weather than in the last decade, at only 32.7 percent of registered voters voting. Medill Reports looks at the numbers. END_OF_DOCUMENT_TOKEN_TO_BE_REPLACED

Both the mayor and Garcia will now have to campaign for another six weeks.

With a near record-low voter turnout, Emanuel received 45.5 percent of the vote. Garcia trailed with 34 percent.

Despite Emanuel’s strong support among African-Americans in 2011, some speculate that the black vote did not turn out for the mayor.

Garcia still has an approximate 10-point gap to overcome.

David Axelrod, an Emanuel supporter and Obama adviser, was quoted in the Sun Times as saying, “[Emanuel’s] gonna get re-elected.”

On Monday, Garcia said, “We’ve picked up a lot of momentum over the past week and our goal is to get into a runoff,” the Chicago Tribune reported. 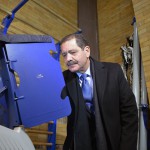 He will continue to campaign against the mayor on several controversial issues facing Chicago, particularly public safety and education. Garcia has the support of Chicago Teachers Union President Karen Lewis, who declined from running in the mayoral race after she learned she had a brain tumor.

Emanuel closed nearly 50 schools in 2013, the overwhelming majority of which were located in minority neighborhoods. Under his administration, Chicago has kept its title as one of the top three cities in the U.S. with the highest murder count with more than 400 in 2013 and 2014.

For the mayoral race, potential runoffs were brought about in 1995 when partisan primaries were abolished and majority vote was implemented. This is the first runoff for mayor, although there have been many in ward elections.